Wade Miley, the posterboy of crafty lefties, is heading back to the Brewers, the team he pitched for in 2018.

The baseball year has began rather quietly, at least compared to the frenetic pace of free agency last month.

Neither of these moves should dramatically impact the division race. The Cardinals, who finished seven games ahead of second-place Milwaukee and 19 up on Chicago, still look like the best team in the Central. That said, both Hosmer and Miley are smart signings for their new teams.

The Cubs have had an interesting offseason with most of their moves coming at low cost with relatively low risk and the potential for a huge, if unlikely, payoff. Center fielder Cody Bellinger (one year, $17.5 million with a mutual option) is a 27-year-old former MVP. Sure, his production at the plate has cratered over the last three years, but he remains an elite defender who runs the bases well and hits for power. Catcher Tucker Barnhart (two years, $6.5 million) is a two-time Gold Glove winner. Righthander Jameson Taillon (four years, $68 million) is a reliable starting pitcher whose 100 ERA+ indicates he’s been exactly league average in each of the past two seasons. Shortstop Dansby Swanson (seven years, $177 million) is more expensive than Bellinger, Barnhart, Taillion and Hosmer, but he also has the highest floor at a premium position—and he’s far more affordable than the other three top shortstops who were available this offseason. Chicago is strong up the middle defensively, and that’s incredibly important for a team with a rotation that pitches to contact.

Hosmer, 33, is another low-cost, low-risk addition. He’s been an above average hitter in seven of the last eight seasons, and even in 2019, his down year (94 OPS+), he hit .265 with 22 home runs and 99 RBIs in 160 games. The Cubs would gladly take that from Hosmer in ’23, especially because they are paying him only the league minimum; the Padres, who traded him to the Red Sox last August, owe him nearly $13 million in each of the next three seasons.

Let’s be clear, it would be shocking to see Hosmer hit 20 home runs this season. He hit 12 over 151 games in 2021 and eight over 104 last year. Still, he was an above average hitter in each of those years, and the Cubs desperately needed a league-average bat at first base. Last season, their first basemen combined for a 69 OPS+, meaning they were 31% worse than the league-average first baseman. Hosmer represents a major improvement, and at the same cost they’d be paying an unproven rookie. Not bad.

Meanwhile, Miley, 36, will slide in nicely as the Brewers’ fifth starter, behind a most formidable 1–4 of Corbin Burnes, Brandon Woodruff, Eric Lauer and Freddy Peralta. Miley was injured for most of last season, but he was quite good when he was on the field (3.16 ERA in nine games). He is the posterboy for the proverbial crafty lefties, with a six-pitch mix that keeps batters off-balanced and induces soft contact.

It’s worth noting that Miley turned his career around back in 2018, when he was pitching for Milwaukee on a one-year deal. This reunion is a great fit for both him and the Brewers.

The Dodgers have until the end of today to decide whether to reinstate Trevor Bauer to their 40-man roster or release him. Two weeks ago, an arbitrator reduced Bauer’s 324-game suspension for violating MLB’s policy on domestic violence and sexual assault to 194 games, time which Bauer has already served.

Check back in with SI.com/mlb later today or tonight for updates. 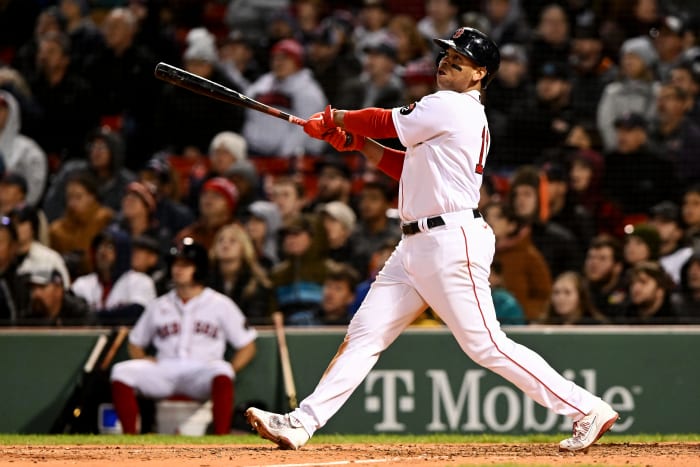 “In a vacuum, Rafael Devers’s 11-year, $331-million extension with the Red Sox is a smart move to retain one of the brightest third basemen in the game.

“But in context? It feels like something bigger. The Devers extension seems almost essential: a move by the Red Sox to show they do have a sense of competitive direction right now and they’ll still pay what it takes to retain one of their young stars, despite recent evidence to the contrary.”

That’s how Emma Baccellieri begins her column from yesterday about the biggest deal of the week. The extension has no impact on Boston’s Opening Day roster, but it does improve the organization’s chances of winning in future years.

Extending Rafael Devers Gives the Aimless Red Sox a Direction by Emma Baccellieri
After a few years of frustrating cost-cutting and hesitant spending, Boston finally has a way forward.

Let’s get you caught up on some of our best stories from the past week:

Six Questions That Will Decide Billy Wagner’s Hall of Fame Fate by Tom Verducci
He is a borderline candidate at the trickiest position to evaluate. Let’s take a look at his Cooperstown case.

Scott Rolen Is on Pace to Make Hall of Fame History by Tom Verducci
His Cooperstown case comes down to the subtle brilliance with which he played the game.

Francisco Rodríguez and the Curious Hall of Fame Case for Closers by Nick Selbe
K-Rod was one of the most dominant relievers of his era—and he has almost no chance of making it to Cooperstown.

15 MLB Predictions to Ring in 2023 by Tom Verducci
The rule changes will bring joy to baseball in the new year.

3. WORTH NOTING from Nick Selbe

Angels fans’ ears surely perked up on Thursday when Warriors owner Joe Lacob said he was looking into buying Southern California’s “other” baseball team. For a franchise that hasn’t won a playoff game in 13 years, the thought of changing ownership to the man responsible for financing the Warriors’ NBA dynasty must feel like winning the lottery. Obviously, there’s a long way to go for this to become a reality, as Lacob is one of six parties who reportedly are interested in making a bid on the Angels. But it’s difficult to envision a better outcome for the Halos than getting an owner who helped transformed one of basketball’s most dysfunctional organizations into a modern juggernaut. Could Lacob be the West Coast’s version of Steve Cohen? Unlikely, given the latter has a net worth more than 10 times that of the former, per Forbes. But having money has not been the Angels’ problem in the past decade-plus: it’s spending it wisely that’s been the issue, and few sports franchise stewards have demonstrated a more shrewd eye than Lacob this century.

Question: Rafael Devers ranks second in the majors with 1,078 total bases over the last four seasons. Who is No. 1?

A few weeks ago, I wrote about how free agency was going much more quickly this year than it had in years past. That was mid-December, and at the time, almost all (13) of the top 15 free agents were off the board. Now? Almost all of the top 50 are gone. If you count Carlos Correa as signed—which, that’s a big “if,” but just for the sake of simplicity—43 of the top 50 are now under contract. (The biggest name remaining is… Jurickson Profar.) And I like it! A faster offseason—more along the lines of what we see in the NBA—is more exciting, less frustrating and puts the league in a much better position heading into spring training. Having a few weeks’ notice on where pitchers and catchers will actually be going before they have to report? Yes, please. I hope the trend sticks around.