The top two teams in the American League are the last two standing as we begin the American League Championship Series on Wednesday. It’s the exact opposite of what’s going on in the National League between the Padres and Phillies, and hopefully, it will put a pause on all those knee-jerk claims that the expanded-postseason format is putting the best teams at an unfair disadvantage.

Once again, we get the most familiar and spiciest ALCS matchup of the past six seasons: the Astros vs. the Yankees. The rivalry is heated, though mostly one-sided. Houston has played in three of the last five World Series, with two of those trips coming after beating New York to get there.

So, will the Astros continue their winning ways in the 2022 ALCS? Or will the Yankees finally get over the hump? Our MLB writers make their picks:

Altuve has 6 hits, 2 homers, 2 RBIs and 5 runs scored in 7 games against the Yankees this season.

The Astros are the better team with the more rested staff and the home field advantage. Their right-handed power pitchers have dominated New York’s right-handed hitters this year.

The Astros feast on mediocre relievers, and the Yankees’ bullpen is depleted. Eventually that’s going to catch up to them.

The Astros are simply terrifying. They’ve made the path to get here look easier than anyone else has this postseason—as the only team to sweep in the DS—and it’s no wonder: With this kind of depth, this balanced a roster, how could they not? Yes, the Yankees are a formidable opponent. But there are still valid concerns about the state of their bullpen, and, against a team like the Astros, there’s no room for error. 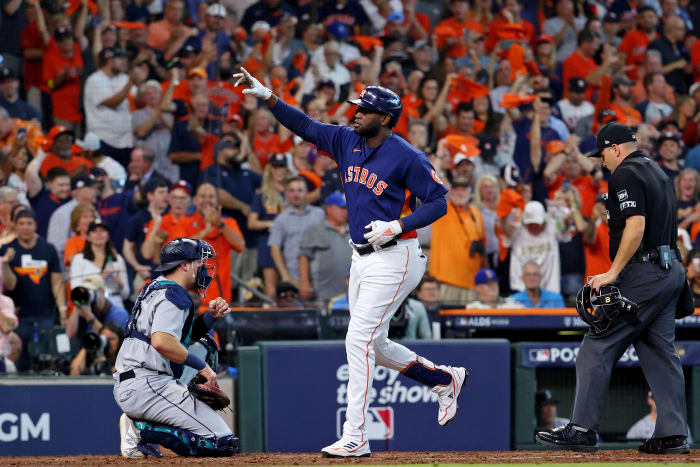 Alvarez leads the Astros so far in the postseason with seven RBIs, two home runs and a .733 slugging percentage.

The Yankees have had too many consistency issues to top the Astros in a seven-game series. Even if Gerrit Cole pulls through in another crucial moment like he did in Game 4 (and that’s if they play him when he’s needed), the Yankees don’t necessarily have the depth of bats to be dangerous in this series. And, barring an explosive performance from Aaron Judge, the Yankees’ tendency to slip into offensive slumps means an Astros lineup with the likes of Yodran Alvarez, Yuli Gurriel and Alex Bregman is a better pick to advance to the World Series.

New York had one of MLB’s strongest bullpens at the start of the season, but injuries and Aroldis Chapman’s absence have robbed the Yanks’ relief corps of its depth—against Cleveland, Wandy Peralta became the first pitcher ever to appear in all five games of a division series. And because of the compressed schedule, Gerrit Cole and Nestor Cortes Jr. will be able to make only one start each. The stars simply haven’t aligned for New York to win a best-of-seven series against the most complete team left in the playoffs.

These two teams enter this series at completely different points. Houston has played just three games over the last 13 days, so its pitchers should be fresh and its hitters should be as close to 100% healthy as they can be in the middle of October. Meanwhile, Game 1 will be New York’s fifth game in six days, with three flights in that span as well. On top of that, the Yankees’ bullpen is depleted due to injuries (Michael King, Scott Effross, Chad Green) or abandonment (Aroldis Chapman, who might not have been on the roster anyway). 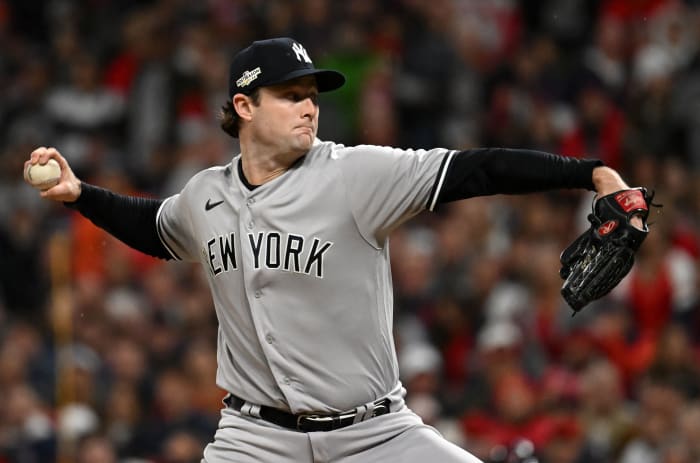 And yet, I’m taking the Yankees, who have felt the heat for the last two months and have yet to crumble. Giancarlo Stanton and Aaron Judge are dangerous in the postseason, even if they were slow to get going in the ALDS, and Anthony Rizzo and Harrison Bader are riding hot streaks into Houston. Also, Clay Holmes has looked great in his last two outings, with his nasty sinker-slider combo darting all over the place, and will be a weapon so long as the Yankees aren’t afraid to use him. Jonathan Loáisiga didn’t allow a run in his four ALDS appearances, and in his 34 games since the All-Star Break (including the ALDS), he has a 1.56 ERA in 34 2/3 innings. Their top three starters (Gerrit Cole, Nestor Cortes Jr. and Luis Severino) match up well with the top three in the Astros’ rotation (Justin Verlander, Framber Valdez and Lance McCullers Jr.), though Cortes will be available to start only Game 4 and then possibly to pitch out of the bullpen. Cole, who is lined up to pitch Game 3 in the Bronx and Game 7 in Houston, is the difference maker in this series. If the Yankees can win the one Cortes start at Yankee Stadium and one of Severino’s starts, they’ll win the series behind a defining Cole performance in Game 7.

For all the bellyaching about the top regular-season teams getting bounced early, the AL offers Yankees-Astros as a counter. The recent history between the two clubs makes for a juicy matchup. Before Tuesday’s Game 5 heroics, Aaron Judge and Giancarlo Stanton had yet to find their rhythm, while Gleyber Torres has similarly struggled. Houston’s big bats—aside from Jose Altuve—were largely productive in their sweep of Seattle. These are two evenly matched teams, but I’m betting that Altuve will not turn in another 0-for-16 showing, and Justin Verlander will get back to his dominant ways. This is a coin toss, and I’ll give the Astros the narrowest of edges.

More MLB Coverage:
• Phillies Look to the Past for Their Winning Pitching Strategy
• After a Muted Celebration, the Yankees Are Moving on to Houston
• The NLCS Comes Down to Bryce Harper and Manny Machado
• NLCS Predictions: Expert Picks for Padres-Phillies
• The Yankees Will Need a New Manager Next Season