Mancini, Andrus and McCutchen had three of MLB’s more representative seasons in 2022.

‘Tis the season for reflections on the year that was. So here’s a question: Who was MLB’s most representative hitter in 2022?

This is the same exercise we ran after last season. As a refresher: We’re not looking for the most average player. (Too easy! It takes all of 10 seconds to sort a leaderboard and see how many guys finished the year with an OPS+ of exactly 100.) Instead, we’re looking for the most representative, the one who best captures what the sport actually looked like in 2022—in terms of power and contact and related metrics. There are lots of ways to be an average hitter. This is about the quest to find the one who best shows the type of baseball we saw this year.

So what did that look like in 2022? Offense was down across the board. The league batting average fell for the third year in a row to reach its lowest point since 1968, but this time, slugging fell with it, too. (So much for papering over low averages with lots of power!) This meant the game as a whole ended up feeling less extreme this year: All three true outcomes were down, with fewer walks, fewer strikeouts and fewer home runs. Here’s what all of those numbers looked like compared to ’21:

We’ll start out by looking for matches in the triple-slash categories—the easiest way to get a rough sense of the major dimensions of a hitter’s game. So let’s pull everyone who finished within 15 points of the MLB average for all three numbers. (Along with a caveat specifying that they had enough playing time to qualify for the batting title.) That’s enough to get us just a handful of hitters: 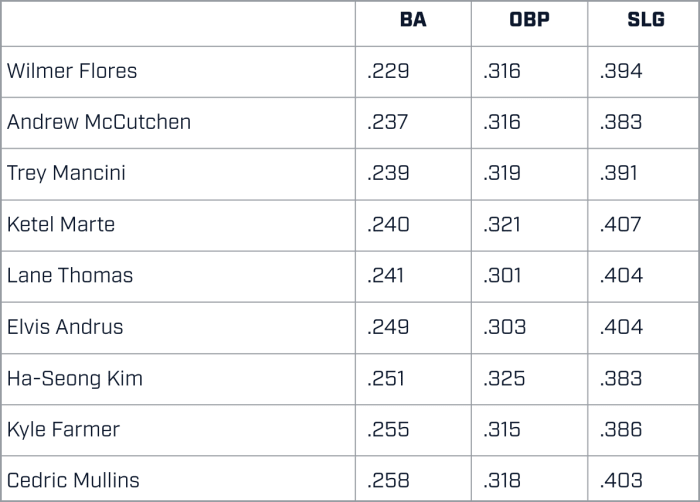 Some of these might feel decently straightforward to eliminate: Does a hitter like Ketel Marte really feel representative of the average? But rather than going one by one, let’s just zoom in on the two hitters whose slash lines were closest, Elvis Andrus and Trey Mancini. They were the only two hitters to finish within 10 points of the average on BA, OBP and SLG. So let’s drill down another level and see how these two compare on a few other stats—strikeout rate, walk rate and three-true-outcome rate, which combines the aforementioned two with home run rate.

Well, that one’s easy: In terms of his slash line, Andrus may have been close to the average, but the way he put his performance together was far from it. Mancini, on the other hand? He’s not dead-on—he was a tad over the league average in all three metrics here—but he’s close enough. It seems like he just might be our safest bet for MLB’s most representative hitter of 2022. But just to be sure, let’s check one more layer of numbers, and take a look at how his batted-ball data stacks up:

That’s not a perfect match, but again, it’s pretty close! There’s no area where Mancini didn’t fall more or less in line with the league average. It’s not just that Mancini’s on-base and slugging were comparable with the rest of the league, or that he matched well enough in terms of the three true outcomes, or that his batted-ball numbers were consistent with the average. It’s that he hit in all of those categories: Across the board, when you look at what MLB did in 2022, you can find a decent reflection of sorts in Mancini.

Who, it’s worth noting, is still on the market as a free agent! Perhaps “accurate capsule of current league trends” isn’t the most inspiring tagline for a potential acquisition, but hey, it can’t hurt.