Editors’ Note: This is an updated version of a story that was originally published on Jan. 6, 2022. It includes new information about Andruw Jones’s Hall of Fame case, as well as the voting results from last year’s election.

Andruw Jones always showed a penchant for playing above his age. In 1996, when he was 19, he became the youngest player ever to hit a home run in a World Series game. The circumstances were extraordinary; his Braves were looking to repeat as champions against the Yankees. It was his first at bat in Game 1. He was facing Andy Pettitte, who one day would be renowned for his postseason heroics. It was what would’ve been the 65th birthday of Mickey Mantle, who previously set the record as a 20-year-old Yankee in the ’52 World Series.

But none of that fazed Jones. It didn’t faze him his next time up, either, when he homered off Brian Boehringer to become the second player in MLB history to round the bases in each of his first two World Series at bats.

Perhaps the teenage Jones was so unaffected by Yankee Stadium’s bright lights that night because he’d always been ahead of the age curve. By the time he was a 13-year-old growing up in Willemstad, Curaçao, he was playing against adults on his father’s team. Legend has it, during this time he once launched a ball over 400 feet onto the tennis court of a nearby hotel. In his next at bat, he hit the hotel. He’d soon play for Curaçao’s national team in the Latin American Games.

Jones was one of the best players ever through his age-30 season.

The Braves signed Jones in 1993, when he was 16 years old. He quickly showed he was no match for the lower levels of the minors, tearing up each league on his way up the ladder. He was named Baseball America’s ’95 Minor League Player of the Year at an age when most mere mortals are just graduating high school and was anointed BA’s top prospect heading into the ’96 season. Before the year was out, he’d be a household name for his prodigious exploits.

Jones’s batting stance quickly became a favorite to imitate for youngsters dreaming of their own big league futures: his left arm nearly hugging his chin, bat cocked up high. That coiled-up posture packed a lot of power; Jones once hit a broken-bat home run to straightaway center at Turner Field. As for what he could do in the field? Well, it was just foolish to try to imitate that.

The kid from Curaçao could glide through the outfield grass like a hovercraft, climb Tal’s Hill for an over-the-shoulder catch and stick his cleats to the outfield wall like a spider to capture a ball in his glove’s web. Upon seeing Jones’s signature Spider-Man catch, Braves broadcaster Pete Van Wieren said, “I don’t know what you’re supposed to say about this kind of play, because you’ve never seen it before.”

Jones’s Hall of Fame case rests on his doing what no one else could do when he was at his best. He holds the record for most defensive wins above replacement (24.4) among outfielders, more than six wins above Willie Mays (ditto with active leader Kevin Kiermaier), and 22nd all time. He ranks second in MLB history in total runs saved (230), behind only 15-time Gold Glove–winning third baseman Brooks Robinson. Jones’s defense was so superb that in his first full season as a starter, in 1998, WAR deemed him to be nearly a full win more valuable than Sammy Sosa, who was named the NL MVP that year during his legendary home run race with Mark McGwire. The only outfielders who can top Jones’s 10 Gold Gloves are Roberto Clemente (12), Willie Mays (11) and Ken Griffey Jr. (11). Don’t trust the metrics or Gold Glove voters? Maybe you’ll listen to Mays himself, who once said he thought Jones was the best center fielder he’d ever seen.

Jones was also no slouch on offense, ending his career with 434 home runs (tied with Juan Gonzalez for 48th all-time), 152 stolen bases, 1,933 hits and 3,690 total bases. His finest campaign at the plate came in 2005, after Mays advised him to widen his batting stance. The result was an MLB-best 51 home runs and a runner-up finish in a close race with Albert Pujols for the NL MVP award.

That combination of prowess in the field and at the plate made Jones one of the best players alive during his peak. Between 1998 and 2007, he ranked third with 57.6 WAR, behind only Alex Rodriguez (80.0) and Barry Bonds (71.0), and just ahead of three players tied with 54.9: Chipper Jones, Andruw Jones’s longtime teammate and first-ballot Hall of Famer; Rockies first baseman Todd Helton, who’s also on this year’s ballot; and Pujols. That means for a 10-year span, Jones was the most valuable player among those never connected to performance-enhancing drugs. That’s cherrypicking his best decade, of course, but Sandy Koufax and Kirby Puckett were inducted for their dominance over a decade (or less), and Jones presents a similar argument.

Virtually all of Jones’s accolades (five-time All-Star, 2005 Silver Slugger, the aforementioned Gold Gloves, 10 division titles) were attained through his age-30 season, which he ended with 368 home runs, 138 stolen bases, 1,683 hits and 3,185 total bases for his career. Only six players have reached the benchmarks of 350 HRs, 100 SBs and 1,500 hits through their age-30 season: ARod, Griffey Jr., Frank Robinson, Henry Aaron, Mantle and Jones. Those are four inner-circle Hall of Famers, one who would’ve been if not for his use of PEDs, and then Jones.

There are 19 Hall of Fame center fielders. Jones ranks 11th at his position in JAWS, which takes the average of a player’s WAR and the WAR from his best seven seasons. It’s a good metric to use for measuring Hall of Fame worthiness because it includes both career and peak value. Jones is worth more JAWS than Hall of Fame center fielders such as Puckett, Richie Ashburn and Andre Dawson. The only players above him who aren’t enshrined are Mike Trout (who surely will be one day), Carlos Beltrán (ditto, unless the sign-stealing scandal is held against him) and Kenny Lofton (who was robbed as a one-and-done candidate in 2013 and deserves to be inducted one day by the Veterans Committee). 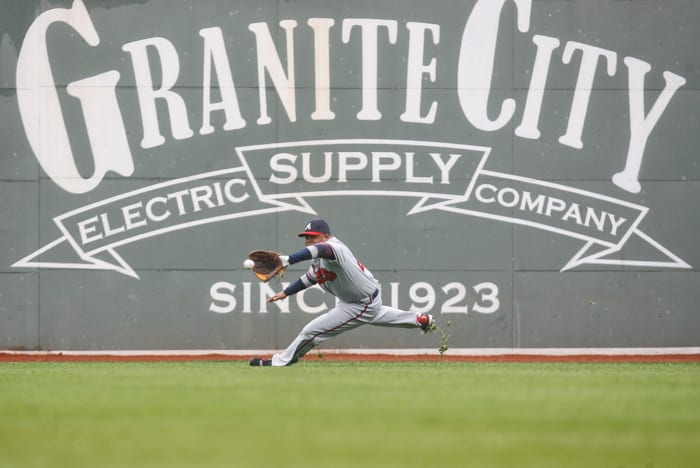 Many people, including Mays, consider Jones the best defensive center fielder of all time.

From a legacy perspective, Jones was the most important defender for the 1990s Braves dynasty that featured three Hall of Fame pitchers: Greg Maddux, Tom Glavine and John Smoltz. That trio undoubtedly benefited from their ballhawk’s shallow positioning, uncanny routes and formidable speed. He should also earn some credit for putting his home country on the map as a hotbed for baseball talent. While he wasn’t the first Curaçao native to crack the majors—that honor goes to Hensley Meulens—he’s hailed there as a national hero who paved the way for stars such as Kenley Jansen, Ozzie Albies and Andrelton Simmons (who all also followed in Jones’s footsteps by playing for Atlanta).

All those factors have not yet coalesced to an airtight case for Jones, who received support from 41.4% of Hall of Fame voters last year, his fifth on the BBWAA ballot. But he certainly seems to be heading in the right direction; after never topping 8% in his first two years of consideration, he jumped to 19.4% in 2020 and 33.9% in ’21. And he’s appeared on 68.7% of the 62 public ballots tallied by Ryan Thibodaux’s Hall of Fame ballot tracker, though his final total likely won’t approach that figure. Last year, there was a whopping 18.8% difference in Jones’s totals on public and private ballots, with voters who revealed their ballots early far more likely to support his case. So there’s still a ways to go before he reaches the 75% threshold needed for induction.

Unfortunately, Jones didn’t do himself any favors upon leaving Atlanta in free agency. After 12 years with the Braves, he signed a two-year, $36 million deal with the Dodgers ahead of the 2008 season and showed up to spring training more than 20 pounds above his playing weight—and this was long after he’d stopped resembling the beanpole who’d debuted more than a decade earlier. That last bit of his physical transformation completely changed the outlook of his career. Jones had never carried a reputation for being a hard worker, but he possessed enough natural talent to get by his entire life up until that point. It’s hard for me to blame him; if I’d been hitting 400-foot bombs against my father and his friends since before I could legally drive, I probably wouldn’t be a gym rat, either. Heck, I’m not one now. Anyway, Father Time eventually caught up to Jones, and he didn’t give much of a chase. After accumulating 61.0 WAR through his age-30 campaign, he compiled just 1.7 WAR over his final five seasons.

His first year in Los Angeles was an unmitigated disaster. He was limited to 75 games, with his knees barking and struggling to carry the extra weight. When he was on the field, he was a shell of his former self. His .158 batting average was the worst in the majors among 344 players with at least 200 plate appearances. His .249 slugging percentage was second-worst. His 31.9% strikeout rate was fifth-worst. Three years after leading the league in homers, he launched just three in 238 PAs. Even more devastatingly, he went from being an elite defender to one of the league’s worst. Jones registered 19 defensive runs saved and 2.2 dWAR in his final year with the Braves; in his first season with the Dodgers, he was worth -6 DRS and -0.5 dWAR. He was never again an elite defender in center, and could barely cut it in the corners. So, the Dodgers cut him a year early despite owing him roughly $20 million.

The next three years, which Jones split among the Rangers, White Sox and Yankees as a spot starter, were not quite as bad; he never registered an OPS+ below 100, the mark for a league-average bat. He even showed up to Chicago’s camp 30 pounds under his previous weight. But after another poor season in pinstripes that saw him fall below the Mendoza line in 2012, he was out of the bigs by his 36th birthday. That same year, Jones was arrested on battery charges at 4 a.m. on Christmas Day for putting his hands around his wife’s neck and saying, “I want to kill you,” according to the police report. Jones pleaded guilty, and after paying a fine he was allowed to play professionally in Japan.

Just as he’d rapidly risen to the highest level of the sport, Jones rather abruptly fell out of it. There’s not much to justify his play in his 30s, and there’s certainly no defending his assaulting his wife. Some Hall of Fame voters could decide to keep him off their ballots because of his arrest.

For most of his career, Jones looked like a shoo-in for Cooperstown. In the end, a Hall of Fame vote for Jones is a show of support for what someone can accomplish in their long, sustained peak without regard for whatever steep decline may follow.