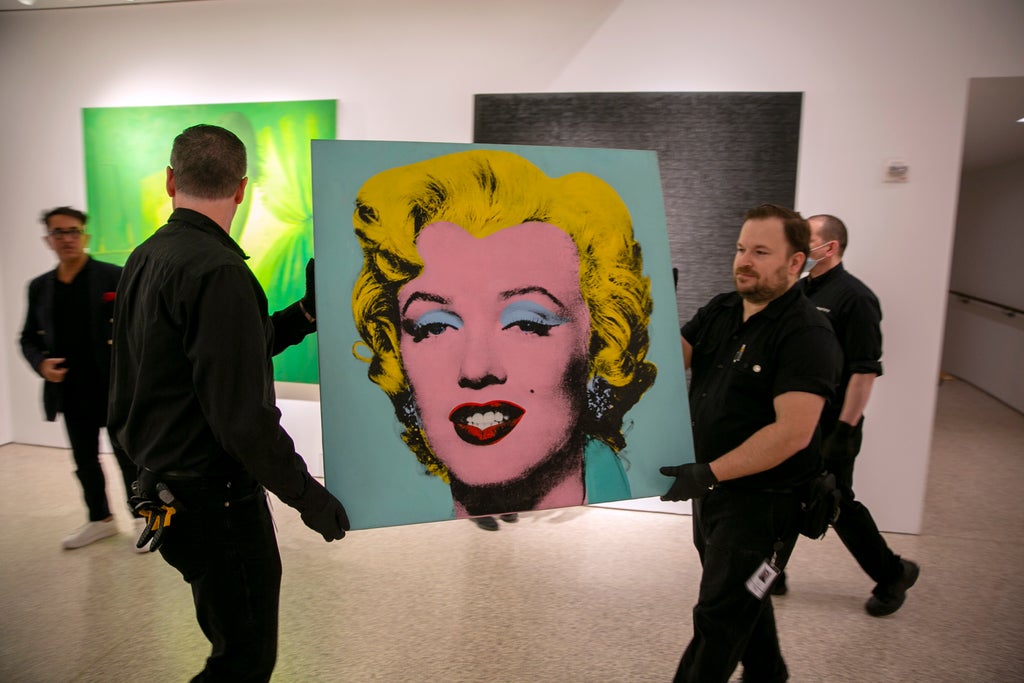 ndy Warhol’s Shot Sage Blue Marilyn has gone under the hammer for $195 million (£158 million), making it the most expensive work by a US artist sold at auction.

The famous image, created in 1964, is a close-up portrait of actress Marilyn Monroe, depicted in vibrant block colours, with yellow hair, blue eyeshadow and red lips on a blue background.

The previous record was held by Jean-Michel Basquiat, whose 1982 painting Untitled of a skull-like face sold for $111 million (£90 million) at Sotheby’s in 2017.

Warhol’s portrait is also the most expensive piece from the 20th century to be purchased at auction, according to Christie’s auction house New York, where it was sold.

It came to Christie’s from the Thomas and Doris Ammann Foundation Zurich, to which all proceeds from the significant sale will go.

The foundation is dedicated to improving the lives of children globally by establishing support systems centered on providing healthcare and educational programs.

Christie’s said the piece was bought by an unnamed buyer on Monday.

“Let it sink in, it’s quite something.”

Warhol’s portrait is also the most expensive piece from the 20th century ever to be sold at auction, according to Christie’s auction house (Ted Shaffrey/AP) / AP

“This is where we wanted to be, clearly,” said Guillaume Cerutti, CEO of Christie’s.

“It proves we are in a very resilient art market.”

Speaking ahead of the auction, Georg Frei, chairman of the board of the Thomas and Doris Ammann Foundation, said: “Andy Warhol’s picture of Marilyn, surely now more famous than the photograph… on which it is based, bears witness to her undiminished visual power in the new millennium.

“The spectacular portrait isolates the person and the star: Marilyn the woman is gone; the terrible circumstances of her life and death are forgotten.

“All that remains is the enigmatic smile that links her to another mysterious smile of a distinguished lady, the Mona Lisa.”