If you had been asked in March to sketch out a hypothetical downfall for the 2022 Mets—asked to guess, if this season were to go badly, what path it would take to get there—a practical answer might have gone something like this. Jacob deGrom cannot bounce back from the health issues that sidelined him in ’21. Due to injury, age or a maddening combination of the two, struggles lie in wait for Max Scherzer. Some level of classic Metsian farce ensues, and the whole endeavor falls apart, following the example of the rotation.

It was not that this kind of downfall was expected. Indeed, something like the opposite felt closer to the truth: The Mets had more reason for optimism this spring than had been the case for them in years. (That deGrom and Scherzer were on a roster together in the first place was proof positive of that!) It was just that if there were going to be some bumps in the road—well, it wasn’t hard to guess what they were most likely to be. There was widespread recognition that deGrom and Scherzer could easily be the best one-two punch in baseball if healthy. There was also widespread recognition that the most important part of that sentence, by far, was “if healthy.” Mets fans could reasonably harbor big dreams for this season, but they could also harbor one very painful, specific nightmare. 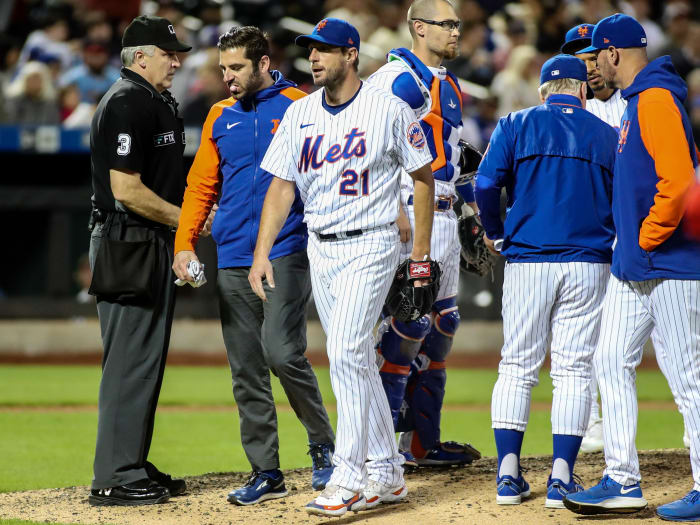 Now, six weeks into the season? Sidelined not by the forearm and elbow issues that dogged him last year but instead by a stress reaction in his scapula, deGrom has yet to pitch at all and does not have a firm timeline for his return, though the team has said it will not be for at least another month. Just this week, Scherzer left a game early with an oblique strain, and the club announced on Thursday that he will be out for six to eight weeks. And fellow starter Tylor Megill, who’d gotten off to a very promising start, is on the injured list with biceps tendinitis. This means half the rotation—including its two most important members—are now unavailable for the foreseeable future.

The current moment, in other words, is precisely what Mets fans might have feared from the very start of spring training. Yet this specific manifestation of it—at least right now—does not feel like the downfall we may have expected it to be. A setback? Of course. But a road straight to collapse? No. Or, at least, it doesn’t have to be.

Sign up for the Five-Tool Newsletter to get all our MLB coverage in your inbox every Friday during the 2022 season.

Why? The Mets are the winningest club in the National League right now. The rotation got off to a hot start, even without deGrom, as one of the best in the game; that’s helped give the team the most comfortable divisional lead in all of baseball. (It’s also helped that the NL East has been rather squishy this year—no other club in the division has a winning record.) This means that the Mets enter Friday seven games up on the Phillies. Having that cushion is going to be crucial because these next few weeks will not be easy. All but two of New York’s series between now and June 16 come against teams that currently have a winning percentage of .595 or above. This doesn’t mean the Mets will lose the bulk of the games in this stretch. But even if they struggle against the NL West trio of the Giants, Padres and Dodgers, and falter at times against the NL Central leading Brewers and the Angels, who also are exorcising their long-held demons this year, the Mets still have some room to breathe. And they’ll likely need every bit of it as they prepare to test their depth. The role of staff ace will be temporarily filled by Chris Bassitt, likely with Carlos Carrasco, Taijuan Walker, Trevor Williams and David Peterson behind him.

Throughout its history, this organization has had a curious relationship with metaphor. More than any other baseball team—perhaps more than any other professional sports franchise—the Mets have cultivated a habit for operating beyond the realm of the literal. This applies both when they’re winning and when they’re losing: It’s not about success or failure. It’s about a fundamental sense of absurdity—a franchise-wide penchant for slapstick and drama and bizarrely comedic timing.

Which is to say that when Mets closer Edwin Díaz blew a save to the Cardinals on Thursday afternoon, less than two hours after the news had come down about Scherzer, it felt like another example of this storied tradition. Of course the Mets would lose on the day the team received such dismal news. Of course the loss would be a frustrating collapse in the later innings. Of course the whole thing would feel like a particularly unsubtle metaphor: When have the Mets ever experienced bad news any other way?

Yet that didn’t happen. Instead, after Díaz blew the save in the ninth, Pete Alonso walked it off with a home run in the 10th. This felt like another particularly unsubtle metaphor. This time, however, it was a positive one: The Mets’ next few weeks will certainly not be comfortable, yet they aren’t necessarily doomed, either. 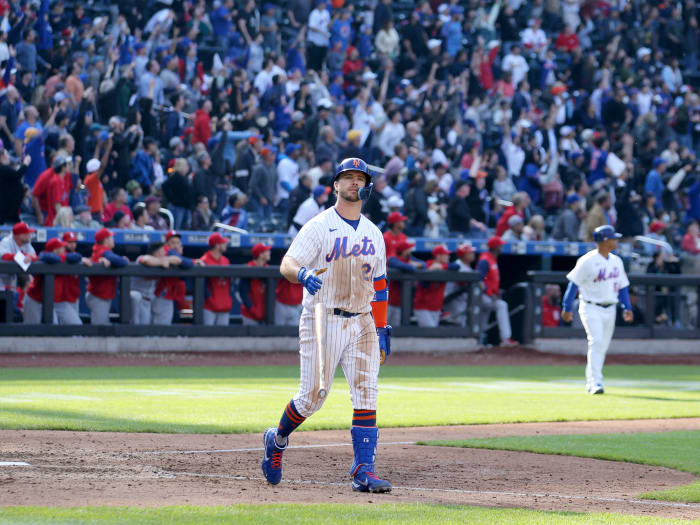 This team has said from the start that it wants to prove itself different from past incarnations of the Mets. Now? It has its chance to show it.

More MLB Coverage:
• Albert Pujols Is Having the Time of His Life
• Making the Case for the American Baseball Cup
• How Concerned Should We Be About These Five Star Shortstops?
• The Yankees Are the Class of MLB This Season
• Hitter, Pitcher, Prankster: Shohei Ohtani Is a Triple Threat