If everything had gone according to plan, MLB rules would have changed this week to drop the number of pitchers on a roster from 14 to 13.

But that move has now been pushed back twice. Originally supposed to go into effect May 2, the adjustment was delayed first to May 30 and then to June 19, both times to give teams more flexibility as they recover from a spring training shortened by the lockout. (And “originally” is doing some work in that sentence: The 13-pitcher limit was actually first agreed to in the winter of 2019 as a rule that would go into effect for ’20. But, as you may recall, baseball ended up needing to be just a little different in that season and the one that followed.) That means just a few more weeks left with 14 pitchers—assuming there are no further delays with implementing the rule—and then baseball will have to deal with this new form of roster crunch. So what will that initial change look like? And how much of a difference will it actually make? 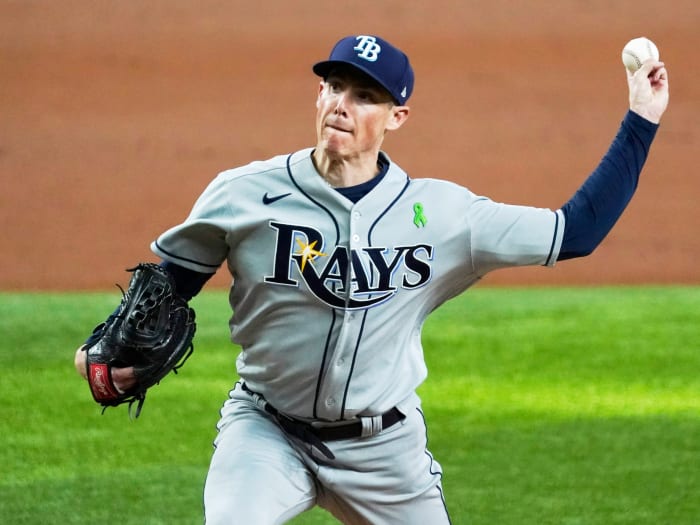 Rays lefthander Ryan Yarbrough is averaging 4.6 innings per start this season. but he went 6 2/3 innings in his most recent outing. That might happen more frequently when rosters are limited to 13 pitchers.

First: Yes, there will be a difference, because most teams have been taking advantage of the delay. According to RosterResource, 21 of the 30 clubs are carrying 14 pitchers right now. (All of the remaining nine are carrying 13—no team has fewer.) We’ll see benches get bigger while bullpens get smaller. But that’s the obvious part: It’s all the second-order effects that are trickier to assess.

What the rule is trying to address is straightforward. Pitching is very, very, very good—better than ever!—and hitters are struggling to keep up. MLB can’t flip a switch to automatically reset that balance and make pitching worse. But the league can at least make it so there are fewer pitchers.

The roster cap is aimed at reversing a lot of trends that you probably grasp intuitively, just from watching at home over the last couple of seasons, even if you don’t know the exact numbers behind them. The length of the average start has fallen from 6.0 innings in 2014 to 5.1 innings in ’22. What was the norm less than a decade ago can’t be found anywhere now: There isn’t a single team whose average starter gets to finish six frames. (Though it is worth noting that the teams with the three longest average starts in ’22—the Padres, Guardians and Astros, who get 5.7, 5.5 and 5.5 innings, respectively—are three of the nine carrying 13 pitchers right now rather than 14.) But it’s not just that starters aren’t going as deep into games. It’s that fact combined with the reality that individual relievers aren’t getting a chance to make substantially longer appearances, either. The length of the average relief appearance has not seen any significant movement in recent years: It’s still just one inning. (To get technical, it’s increased slightly, but only from 1.00 IP in ’14 to 1.09 IP in ’22.) It would be one thing if MLB were experiencing shorter starts paired with multi-inning relief stints. Instead … it’s shorter starts followed by a parade of single-inning relievers, pitching at max effort, creating an increasingly difficult environment for hitters.

Which ties into another piece of this phenomenon that you probably already know intuitively: The fact that MLB has seen more pitchers than ever in recent years has not meant that the bar for entry is any lower for them. Hardly! Instead, four-seam fastball velocity is at the highest it has ever been in the era of pitch-tracking data—up to 93.8 mph. (That’s a full tick over the average mark of 92.8 mph in 2014, less than a decade ago.) And while pitchers may be throwing their fastball harder than ever, they’re also throwing it less frequently than ever, because their breaking and offspeed stuff has gotten better, too. (To go back once more to ’14: Fastballs then made up 58% of all pitches, whereas now, they’ve fallen below 50% for the first time since at least ’08, the year pitch tracking began.) Their arsenals are simply nastier across the board. In other words, the fact that teams are using more pitchers has only meant they have found a way to optimize the production from each one. There are more pitchers because there are better pitchers, and in turn, there can be better pitchers because there are more pitchers.

Whether that brand of baseball is entertaining is a personal judgment of aesthetics. But MLB has clearly determined that it’s interested in making an adjustment here. The resulting change of limiting the number of pitchers on a roster may not look striking on an individual game level. But in aggregate, over the course of a season, it seems likely to make at least some difference. 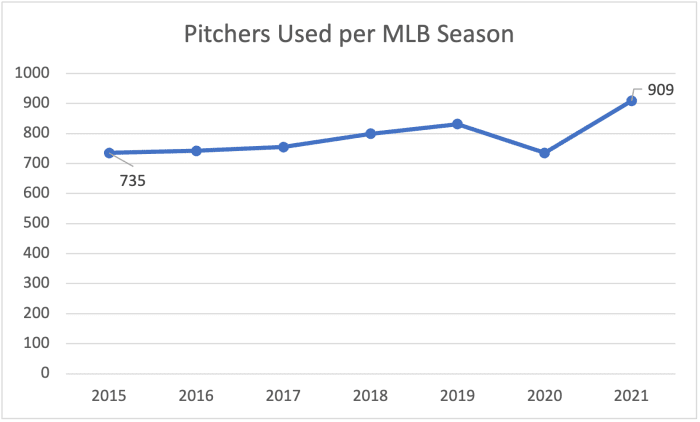 The number of pitchers used in a season has increased each year since 2015, with the exception of the 60-game 2020 season.

It’s impossible to untangle all the factors behind that big increase in pitchers used last year. But the trend is clear: After increasing gradually over a few seasons prior—enough so to cause the initial proposal to limit pitchers on a roster back in 2019!—pandemic conditions led to a dramatic spike. (Indeed, perhaps the wildest piece of this chart is that ’20, which was less than half the length of a typical season, doesn’t look particularly out of place: MLB teams used just as many pitchers to make it through the 60 games of ’20 as they did for all 162 in ’15!) Some of that increase appears tied to the same general management decisions that baseball was already seeing before the pandemic. Some was due to the logistics of COVID-19 protocols. Some of it was due to shuffling pitchers around and trying to manage their workloads by optioning them again and again. (The new collective bargaining agreement has tried to address this part: Now players can only be optioned to the minors five times per season.) But much of it was due to injuries.

Here’s the same graph with the number of pitchers who made at least one trip to the injured list included: 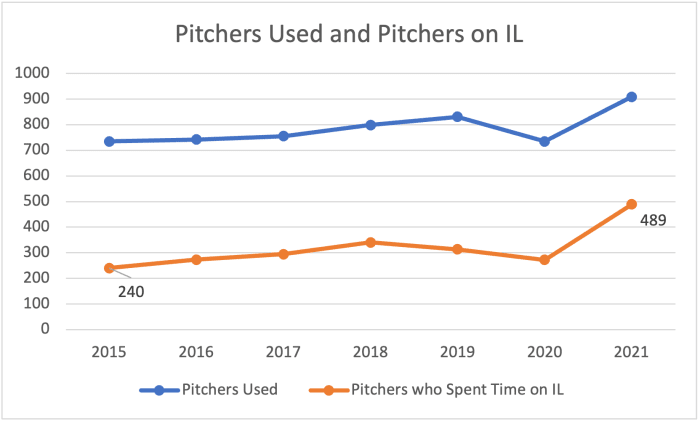 It is, again, impossible to untangle all the factors here. There was an upward trend before the pandemic seasons—as pitchers have been throwing harder and using more extreme breaking stuff, they’ve made more trips to the IL, too. But so much of the last few years has meant working through an environment that is especially ripe for pitching injuries: irregular schedules and abbreviated spring trainings. In general, as described above, teams have been using more pitchers as a form of strategy. But recently, teams have been using more pitchers simply because they have to, because of health.

In other words, MLB is coming off a particularly striking form of pitcher usage in 2021—one tied to the fallout from the very particular circumstances of a shortened pandemic season in 2020. After the uncertainties of the lockout last winter, a variation of this has extended into ’22, which is exactly why teams were happy to push the drop to 13 pitchers back to June. (So far, 650 pitchers have appeared in MLB games in ’22, and 225 have made at least one trip to the IL.) All of which is to say: Some of the pitching trends we saw last year and some of what we see right now have been tied to very specific external circumstances that should not apply so much going forward. But the general trends are much bigger and more deeply rooted than that. Capping the number of pitchers on a roster is perhaps the most straightforward way to address them. Individual pitchers—starters and relievers—will have to throw more innings, and therefore, to preserve their arms, will not be able to throw every pitch with the same maximum effort. This should make it easier for batters to put the ball in play, even if it doesn’t significantly increase scoring. And not throwing max effort should help keep at least some pitchers healthy.

As for what it will look like more specifically in practice to go from 14 pitchers to 13? We’ll have to wait a few more weeks to find out.