Once upon a time, Black Friday meant standing in line at your local shopping center or department store at ungodly hours, ready to throw some elbows at strangers for the chance at scoring 40% off a mid-tier flatscreen TV. Now, all the discounts one could possibly need are just a few clicks away. Maybe doing away with Walmart stampeding is a good thing, but there’s still some level of nostalgia for the way things used to be.

No baseball executives will need to bulldoze their competitors (at least literally) this winter, but all of them will pursue the same thing holiday shoppers across America will this weekend: bargains. In order to identify these bargains (or the five most intriguing under-the-radar free agents still available), there are a few factors to consider.

First, none of these five appear in the top 30 of our best free agents list. In fact, two weren’t even ranked in the top 50. Second, there’s a reason that each of these players is overlooked: age, injury history, recent production or all of the above. The five have some combination of the those three things that makes them less than top-billed, at least for the moment. And third, the goal here is to identify players with at least a modicum of upside, or who give us a reason to believe that they may ultimately outperform whatever contract they land.

With that preamble out of the way, let’s get to the deals (and happy shopping, everybody).

Heaney appeared in one postseason game for the Dodgers this year, pitching three innings of Game 3 of the NLDS against the Padres.

The Dodgers are to pitchers with shaky histories what Victor Melling was to Gracie Hart: makeover gurus. Heaney was coming off a 2021 campaign in which he posted a 5.83 ERA over 129 ⅔ brutal innings for the Angels and Yankees when the Dodgers paid him $8.5 million. Once they got their hands on him, they reworked his slider into a completely new pitch and made him one of the league’s best at missing bats—seemingly overnight.

Hard contact remains an issue for the lefthander, and he still allowed 1.73 home runs per nine innings this season. There’s also the issue of availability, as he managed just 72 ⅔ innings. Relying on the soon-to-be 32-year-old to make 25 starts might be wishful thinking, but if the changes from his stint in Dodgers rehab are here to stay, he’s a safe bet to be effective when healthy.

The second-base market is pretty weak this year, which means Segura will likely be in fairly high demand. Though he wouldn’t necessarily qualify as a big splash, the veteran infielder’s steady production creates a high floor for potential suitors.

From 2013 to ‘21, Segura missed a total of 171 out of 1,356 games, or just 12.6%. A freak finger injury sustained while attempting to bunt cost him 64 games last year, but it did little to impact his results on the field. The second baseman remained a high-contact player good for double-digit home runs while playing strong defense. He’ll be 33 next season and might not get a multiyear deal, but given that the Brewers picked up their $10 million club option for Kolten Wong (a player of similar caliber who’s seven months younger than Segura), expect a deal in about the same range.

Brantley will be 36 in May, and after missing nearly 100 games last season, he is among the league’s slowest outfielders. He’s not a candidate to play 150 games, and he just had surgery to repair a torn labrum. So why is he on this list? Because he still hits. He posted a 127 wRC+ in 277 plate appearances last season, with more walks (31) than strikeouts (30). He has put up a wRC+ of 120 or better in each of the last five years, with a .367 on-base percentage during that span. 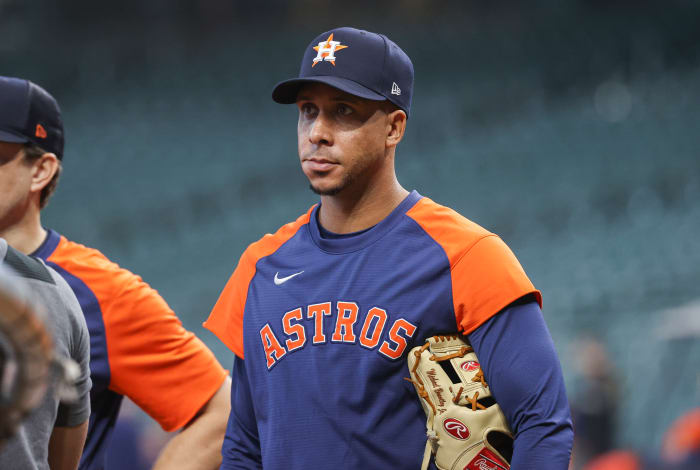 Brantley was named an All-Star in five seasons between 2014 and ‘21.

Minute Maid Park’s short porch in left field was perhaps the best place to hide his shoddy defense and subpar throwing arm. Though he offers little power, Brantley’s ideal landing spot would have ample opportunities for him to be the designated hitter, plus scheduled off days to keep him fresh. But if he lands with an eventual contender and is able to stay in the lineup, he’ll be one of the most trustworthy bats in a postseason environment.

Relief pitchers are perhaps the most difficult group to accurately forecast, and Rogers fits in perfectly with his bizarre results and obvious attributes in recent years. First, the positive: Rogers has a 31.5% strikeout rate over the past three seasons, the 19th-highest among relief pitchers during that span. Second, he’s given up fewer than one home run per nine innings over that stretch, and he isn’t too susceptible to walking many batters either.

Now, the downside: Rogers fell apart once he arrived in Milwaukee after being traded as part of the Josh Hader deal, posting a 5.48 ERA in 24 games for the Brewers with six home runs in 23 innings. The average velocity on his fastball was down considerably compared to 2021, at 94.3 mph, but not far off from what it was in previous seasons. Rogers has also posted a .351 BABIP over the last three years, which could be related to command issues, but also certainly stems from bad luck to some degree, considering his career mark prior to that run was .301. The lefthander will likely get interest as a bounce-back candidate for teams needing to fill vacant late inning roles. 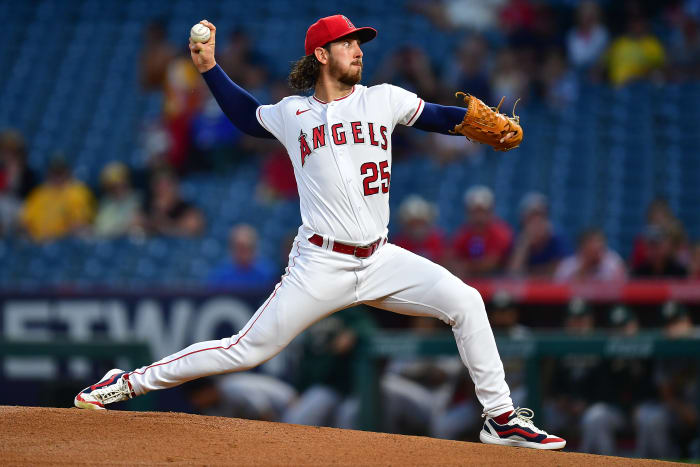 The Angels and Lorenzen signed to a one-year-deal for $6.75 million in December 2021.

As six-man rotations grow increasingly popular, the need for starting pitching has never been higher. Here’s the problem, though: It’s hard enough to find one or two good starters, let alone six. For many teams trying to expand their rotation, the back end is a perfect place to slot an effective swingman type—exactly the role Lorenzen could fulfill.

Lorenzen had basically been a full-time relief pitcher for six years when the Angels signed him last offseason and immediately announced plans for him to be a starter. The results were mixed: He had a 3.45 ERA through his first 10 starts before a shoulder injury sapped his velocity and landed him on the injured list. By the time he returned to the mound in September, the team was well out of contention. But Lorenzen looked sharp down the stretch, striking out 30 batters over five starts and 26 ⅔ innings with a 2.36 ERA, plus throwing at least 95 pitches in each of his last three outings.

Perhaps being thrown into the deep end as a starting pitcher was too much to ask for someone who hadn’t started regularly in seven years, but Lorenzen proved he could at least be effective in such a role. The list of pitchers who threw at least 90 innings last year with a sub-4.00 expected ERA isn’t as long as you think, so expect teams needing help in the rotation to hone in on the soon-to-be 31-year-old’s services like a parent searching for that last PS5 at Best Buy.