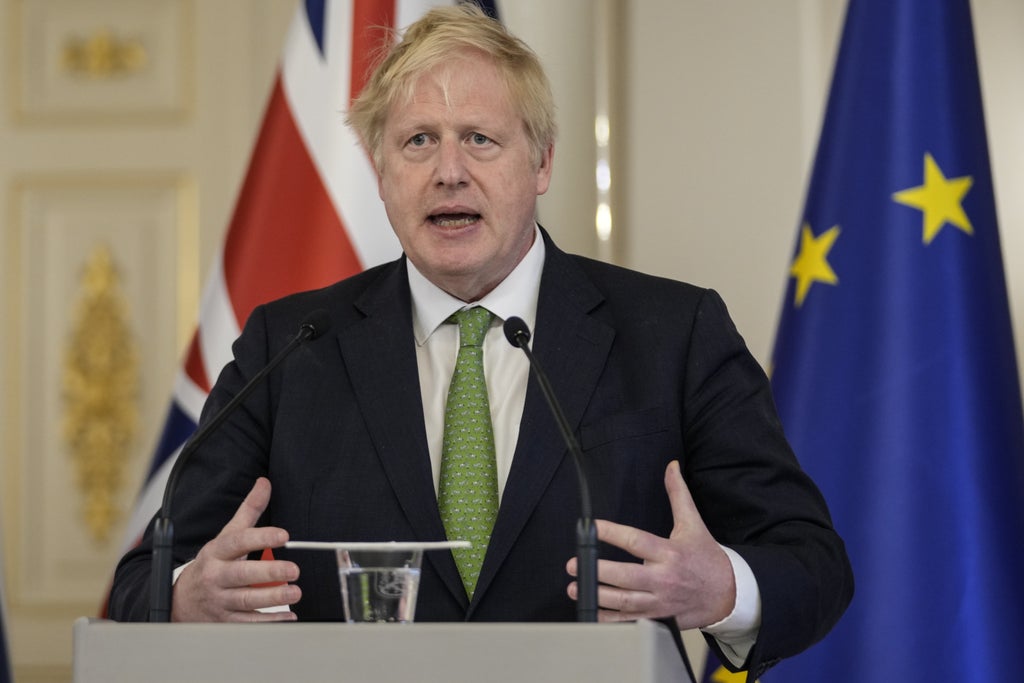 oris Johnson has told the European Union there is no need for “drama” as he doubled down on hints he could override elements of his post-Brexit deal on Northern Ireland.

The Prime Minister said on Wednesday that the Good Friday Agreement is more important than the Northern Ireland Protocol, as he dismissed suggestions of any possible escalatory response from the EU as “crazy”.

He said the protocol fails to command support from unionists in the region, adding “we need to sort it out”, despite warnings from Joe Biden’s White House and European leaders not to single-handedly meddle with the agreement he brokered.

Foreign Secretary Liz Truss is set to tell the EU that the dispute over Northern Ireland cannot drag on, after warning she will “not shy away” from taking action as she accused the EU of proposing solutions that would “take us backwards”.

As ministers consider whether to introduce legislation overriding parts of the deal, senior Cabinet member Michael Gove warned “no option is off the table”.Northern Ireland Minister for State Conor Burns said on Wednesday evening that the UK Government will have to take unilateral action over the protocol if they cannot resolve issues with the European Union.

Speaking on LBC’s Tonight With Andrew Marr programme, Mr Burns said: “And if the EU are saying to us that, and they’re not I don’t think yet at the position of saying there’s nothing more to talk about, then we will have to take actions to prioritise stability in Northern Ireland, powersharing in Northern Ireland, to protect the institutions of the Good Friday Agreement and that will mean intervention unilaterally, yes.”

German Chancellor Olaf Scholz has stressed “no-one should unilaterally cancel, break or in any way attack the settlement”.

Amid suggestions unilateral action from the UK could spark a trade war during against the backdrop of the invasion of Ukraine, Mr Johnson told BBC News: “Let’s face it, we’re talking about really in the scheme of things, a very, very small part of the whole European economy and I think 0.4% of the value of the whole of the EU economy in Northern Ireland.

“I didn’t think there’s any need for drama.

“This is something that just needs to be fixed.”

At an earlier press conference in Sweden, Mr Johnson said: “The most important agreement is the 25-year-old Belfast Good Friday Agreement.

“That is crucial for the stability of our country of the UK, of Northern Ireland.

“And it’s got to be that means that things have got to command across community support.”

A White House spokesman stressed the need for talks to continue to resolve the issues.

“The best path forward is a pragmatic one that requires courage, cooperation, and leadership,” he added.

“We urge the parties to continue engaging in dialogue to resolve differences and bring negotiations to a successful conclusion.”

“The sooner that happens, the better.

“The protocol is not supported by any unionist MLA elected to the Assembly last week.

“We can’t go on with the situation where there is no consensus at all for this protocol,” he told the BBC.

After the republican Sinn Fein party became the largest party in Stormont, he is refusing to re-enter the powersharing government until issues with the protocol are dealt with.

Ms Truss is expected to reiterate in a call with European Commission vice president Maros Sefcovic on Thursday the risk to the Good Friday Agreement and warn that the situation cannot drag on.

Mr Gove, who previously led talks with Mr Sefcovic, told LBC radio he is “super cool” with threats to tear up the protocol.

But he insisted the Government is not going to tear up the agreement, telling BBC Breakfast: “No.

“We are going to negotiate with the EU in order to get the best possible outcome for the people of Northern Ireland, but no option is off the table.”

He insisted Mr Sefcovic and the Foreign Secretary have a “good relationship”, adding: “They will try to make progress tomorrow.

“I know that both of them are fully committed to making sure we resolve some very difficult issues that have arisen.

“You would expect a UK Government, when it is thinking about the security of the entire United Kingdom, to say that there is no option that is off the table, and that is absolutely right.”

Mr Gove dismissed suggestions that he is among Cabinet members opposed to tearing up the protocol, which was agreed by Mr Johnson in 2019.

Asked how angry he is on a scale of one to 10, Mr Gove told LBC radio: “Minus five.

Downing Street backed Ms Truss in claiming that some EU proposals are “a backwards step”, but declined to say whether preparations have been made for a possible trade war with the bloc.

The Prime Minister’s official spokesman said: “I think we’re getting ahead of ourselves.

“We want nothing but good relations with our EU partners, but I’m not going to get into speculation about what might happen down the line.”

He said “some relatively minor concessions” from the EU in the past “show that, where there was willing, change could be achieved”.

Asked if the Government is drawing up controversial new legislation, the spokesman said: “I wouldn’t get into, on any issue, the ins and outs of policy development.

“This is something we’re looking at closely, it’s a serious issue, all options are on the table.”

Officials working for Ms Truss are drawing up draft legislation to unilaterally remove the need for checks on all goods being sent from Britain for use in Northern Ireland.

The PA news agency was told that Ms Truss is poised to take further action in the coming weeks if negotiations with the EU continue to stall.

The proposed law would allow businesses in Northern Ireland to disregard EU rules and regulations and remove the power of the European Court of Justice to rule on issues relating to the region.

Crucially, it would in parts override the protocol agreed by Mr Johnson in 2019 and mean the UK had breached its obligations under the Brexit agreement.

But it has been argued that the protocol will not be completely overridden, with measures instead being considered to ease the issues on the ground in Northern Ireland.