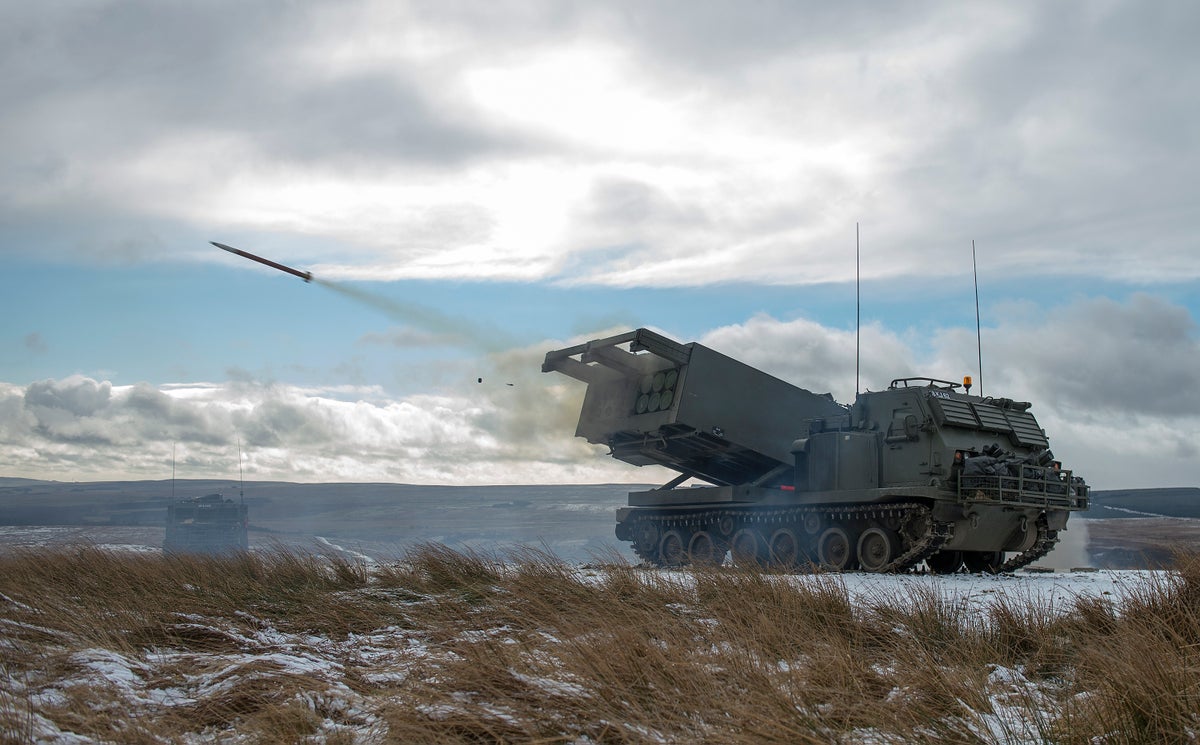 he UK will send its first long-range missiles to Ukraine after Russia struck the outskirts of Kyiv for the first time since April.

Defence Secretary Ben Wallace said Britain will send an unspecified number of M270 launchers, which can fire precision-guided rockets up to 50 miles – a longer range than any missile technology currently in use in the war.

“The UK stands with Ukraine in this fight and is taking a leading role in supplying its heroic troops with the vital weapons they need to defend their country from unprovoked invasion,” Mr Wallace said in a statement from the Ministry of Defence (MoD).

“If the international community continues its support, I believe Ukraine can win.

“As Russia’s tactics change, so must our support to Ukraine. These highly capable multiple-launch rocket systems will enable our Ukrainian friends to better protect themselves against the brutal use of long-range artillery, which Putin’s forces have used indiscriminately to flatten cities.”

Ukrainian troops will be trained in the UK to use the equipment, he added.

The MoD said the decision to provide the launchers was closely co-ordinated with the US government, which said that it would supply High Mobility Artillery Rocket Systems to Ukraine.

When the US announced it would be sending the missiles, Russian president Vladimir Putin vowed to hit new targets.

“If they are delivered, we will draw appropriate conclusions from this and use our weapons, which we have enough of, to strike at those objects that we have not yet hit,” he said in an interview with state TV channel Russia-1, which was filmed on Friday.

Kyiv’s residents awoke on Sunday to the first Russian strikes on the capital since April 28, while Moscow’s forces have also maintained steady pressure via artillery and air strikes in the eastern Donbas region.

Meanwhile, the UK announced a specialist legal and police team will be offered to assist the chief prosecutor investigating alleged Russian war crimes in Ukraine.

Deputy Prime Minister and Justice Secretary Dominic Raab on Monday will present a second package of support for the independent investigation, on top of the £1 million funding provided by the UK Government earlier this year.

The offer will include a dedicated Metropolitan Police officer stationed in The Hague, providing the International Criminal Court (ICC) and its prosecutor Karim Khan with swift access to further British police and military expertise.

In a statement marking the 100th day of the war, Ms Truss said the UK remained determined that Mr Putin’s offensive should not succeed.

Putin’s invasion has brought death and destruction on a scale not seen in Europe since World War II. This war has huge ramifications for global peace, prosperity and food security

“He expected the invasion to be over in days, but significantly underestimated the resolve of brave Ukrainians, who have valiantly defended their country,” she said.

“Putin’s invasion has brought death and destruction on a scale not seen in Europe since World War II. This war has huge ramifications for global peace, prosperity and food security. It matters to us all.

“Today is a moment to pay our respects to the thousands of innocent civilians murdered since the invasion, and reaffirm our steadfast support for Ukraine’s heroic defence, to ensure they succeed and Putin fails.”