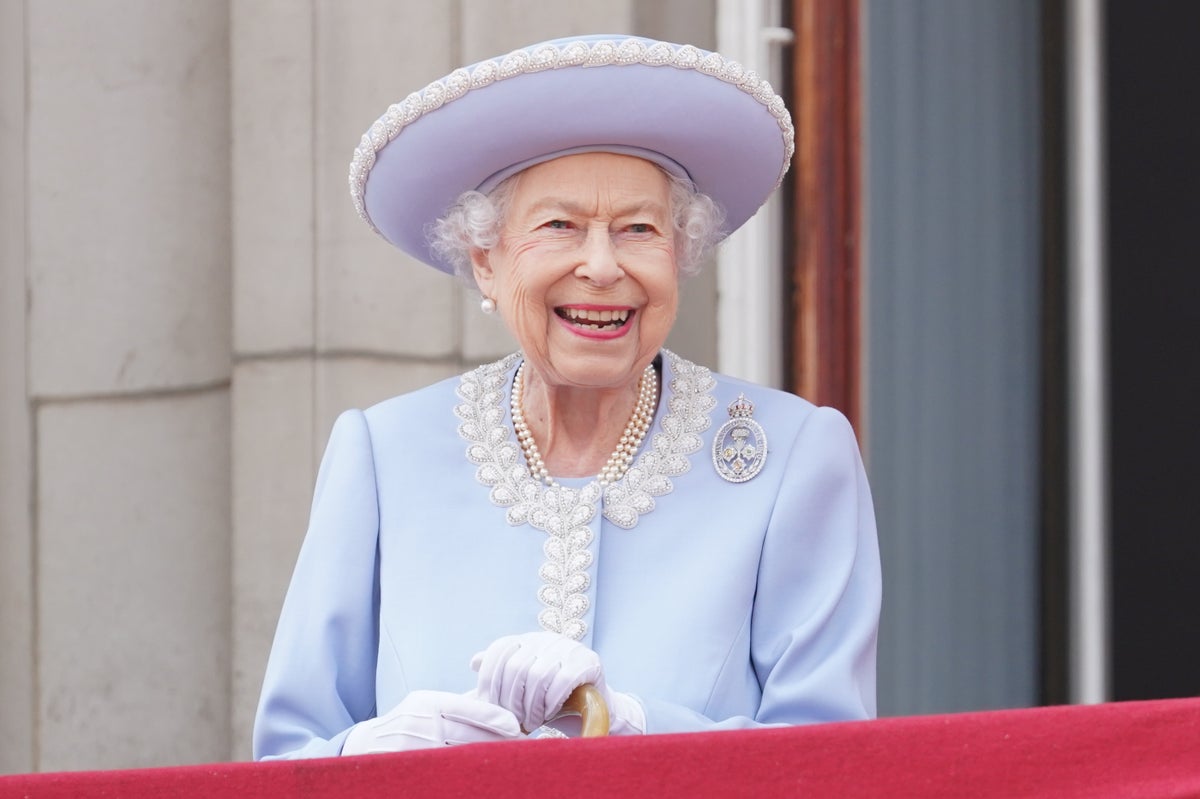 he Queen has held a virtual call with the Australians of Year and the country’s governor-general to commend them on their “marvellous work” as she celebrates her Platinum Jubilee.

The Queen was in a good spirits throughout the meeting, with the award recipients remarking with some surprise on her “cheeky” sense of humour.

During the Zoom call with the six Australians which included recently retired professional wheelchair tennis player Dylan Alcott, the 96-year-old monarch remarked on the “splendid” technology which enabled the virtual meeting to take place despite its participants being on opposing sides of the world.

The call, which took place on May 9 but was only made public on Saturday, began with Governor-General of Australia David Hurley noting to the Queen that it was 34 years to the day since she had opened Parliament House in Canberra.

The Queen (followed by the Duke of Edinburgh), is accompanied by then-Australian prime minister Malcolm Fraser during her Silver Jubilee visit to Australia (Ron Bell/PA) / PA Archive

“Oh!” the 96-year-old remarked in surprise before recalling “that bit of water” that is the lobby’s water feature.

“That little pond inside intrigued me very much indeed. I wondered how many people had fallen in it,” she joked, smiling broadly. It was not clear if she knew that in the three decades since its creation, the feature – known as the Pool of Reflection – has become notorious in Canberra for causing such incidents.

Mr Alcott – a four-time Paralympic gold-medal winner – was the first to introduce himself to the Queen, telling her that when he informed his mother he would be meeting the monarch she had burst into tears.

“This is awesome,” the 31-year-old said, before going on joke that he “unfortunately won a couple of Wimbledon titles”, beating Great Britain’s players which she may not have been “so happy about”, prompting laughter from the Queen.

“The reason I get out of bed every day is to change perceptions, so people with disability, people like me, can get out and live the lives they deserve to live,” Mr Alcott added.

The tennis star became slightly emotional as he told the Queen about “the honour” of being an advocate for people with a disability as Australian of the Year.

“When I was a young kid I used to hate myself, Your Majesty, and… if I thought anybody in a wheelchair, let alone myself, could be Australian of the Year, I wouldn’t have believed you,” Mr Alcott said. “When I told my mum last night that I was getting to meet you, she cried… So I think I’ve made her very proud as well.”

Also meeting the Queen was Young Australian of the Year, Dr Daniel Nour, 25, who founded a mobile medical service that provides GP-led, medical access to those who are experiencing homelessness and are vulnerable.

Dr Nour told the Queen he first had the idea for the service while studying at Imperial College London.

“I came across a man who was having a seizure at Waterloo, just outside of the train station,” he explained.

The Sydney Opera House, with the Harbour Bridge in the background, during the Queen’s 1977 visit to Australia (Ben Roll/PA) / PA Wire

Following the call, the 2022 Australians of the Year marvelled to the Australian Broadcasting Corporation (ABC), which broadcast parts of the video call on Saturday, over the Queen’s “cheeky” sense of humour and how “down to earth” they found her.

“She’s pretty cool. I’m not going lie,” Mr Alcott said. “She was lovely. She was so lovely and what a huge honour to be able to represent the whole of Australia. The six of us, we’re pretty lucky and it’s something I’ll remember forever.”

“She’s cheeky. I love that she’s cheeky,” Dr Nour added. “She had a cheeky smile… and was so down to earth and so lovely.”

On Saturday, in a ceremony which included the opening of the new Queen Elizabeth Water Gardens, Mr Albanese said the monarch had made 14 trips to the nation’s capital during her reign – more than other royal.

He added that when the Queen visited in 1963 for Canberra’s 50th anniversary, the lake was empty because of a drought. Seven years later, on a cold day in April she had returned to open the National Carillon, which was a gift from the UK Government to the people of Australia.

“Her Majesty said at the time, ‘the bells’ harmony will be a reminder of the enduring ties of kinship between Britain and Australia,’” Mr Albanese said.

Earlier this week, the Sydney Harbour Bridge was illuminated in purple to mark the Platinum Jubilee, just days after the appointment of the country’s first minister tasked with overseeing a transition to a republic.

Matt Thistlethwaite was sworn in by the newly elected Labor government as assistant minister for the republic on the eve of the Jubilee and said the occasion gave Australians food for thought about the country’s future.

“As the Queen comes to the twilight of her reign, we can appropriately – and we should — pay respect to her for the wonderful job that she’s done,” Mr Thistlethwaite told the PA news agency.

“Australia is an independent nation. We have our own unique identity and culture. Each and every Australian, no matter their background, birthplace, gender or religion should be able to aspire to be our nation’s head of state.

“My role is very much one of education in the initial stages: explaining to people that we do have a foreign monarch as our head of state, we have a proxy representative in the governor-general, but that we can have an Australian as our head of state.”

The new government has informally pledged for a referendum on a republic in its next term if it wins a second election, with Mr Albanese prioritising a referendum for constitutional recognition of the country’s Indigenous peoples.