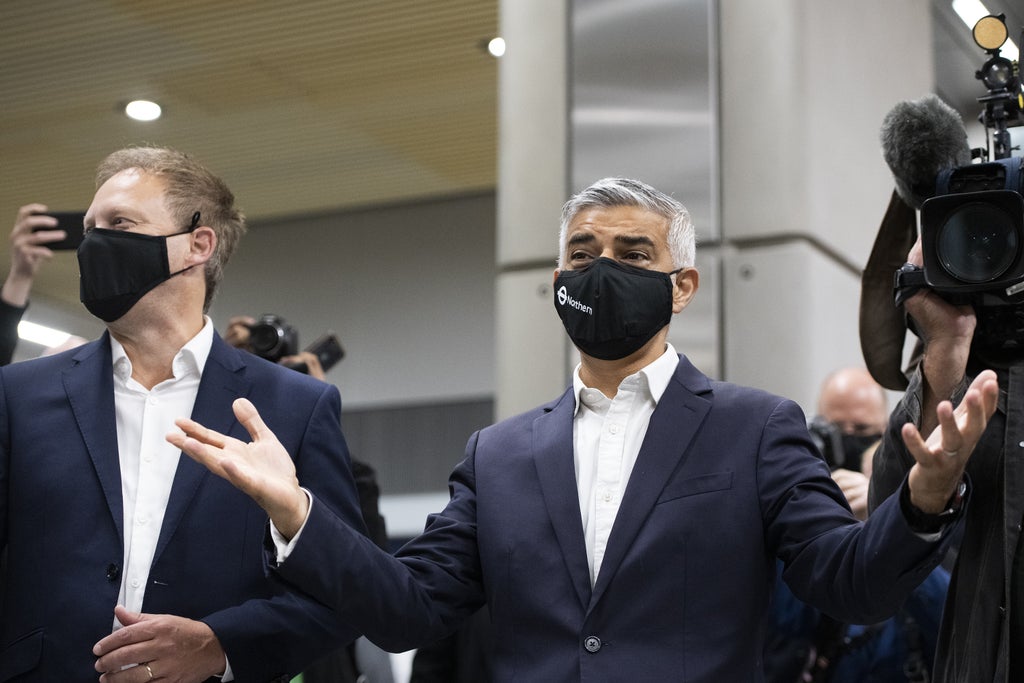 adiq Khan has been accused by the Government of using the Crossrail opening date announcement to win votes for Labour in Thursday’s local elections.

Tory Transport Secretary Grant Shapps said he would report the matter to the Electoral Commission watchdog as he believed it breached laws banning certain official announcements in the run-up to polling day.

But City Hall immediately hit back, saying the Department for Transport had been informed of TfL’s announcement – that Crossrail will open on Tuesday May 24 – a week ago, and raised no objection.

Mr Shapps reacted angrily after the Evening Standard revealed on Wednesday that the central section of the £20bn long-awaited Elizabeth line would open in 20 days’ time.

He said: “This announcement is an act of breathtaking political cynicism by the mayor, breaking election rules on such announcements in an effort to garner votes the day before the local elections in London. I am therefore immediately referring this breach to the Electoral Commission for investigation.

“Londoners reading this unscrupulous headline grab might like to know that the Government has poured billions into Crossrail to solve delays clocked up on the mayor’s watch, while propping up a transport system hobbled financially by his chronic incompetence.”

Mr Shapps appeared to further twist the knife when he tweeted an image of Crossrail above a “Conservatives” campaign logo.

The “pre-election period”, previously known as purdah, began in London on March 28 and is meant to prevent councils and other public bodies such as TfL from issuing any publicity which seeks to influence voters until the polls close.

The rules state that authorities must “not publish any material which, in whole or in part, appears to be designed to affect public support for a political party”.

Authorities can still issue media releases on factual matters provided that these do not identify individual councillors or groups of councillors, according to the Local Government Association.

TfL’s announcement did not mention Mr Khan – who is also the TfL chair – or the Labour party or any other politician. It only quoted TfL commissioner Andy Byford, who is a civil servant.

TfL had its press release checked by lawyers and declined to make Mr Byford available for interview to prevent any accidental breach of the pre-election rules.

It is understood that the opening date announcement had to be made on Wednesday for operational reasons to enable the railway to open as soon as possible, and ahead of the Queen’s platinum jubilee weekend celebrations.

Making the announcement on Thursday – coinciding with polling day – or on Friday, when results would be declared, were ruled out.

TfL chiefs chose the opening date on Tuesday afternoon without the mayor present.

Separate to the TfL announcement, which was made at 945am on Wednesday, the Mayor’s press office issued a statement from Mr Khan 10 minutes later, in which he expressed his delight at the opening date and the fact the line would open in the year of the Queen’s platinum jubilee.

Mr Khan is not standing for election – the next City Hall elections are in May 2024 – but has been campaigning for Labour candidates across the capital.

A spokeswoman for Mr Khan said: “The mayor is absolutely delighted that the Elizabeth Line will be opening to passengers on May 24, transforming transport in the capital and South East, and boosting the whole UK economy by £42 billion each year.

“It’s a shame that the Transport Secretary has decided to try and start a row rather than join the celebrations of the fact that this world-class new railway is about to open to millions of passengers.”

The line’s cost has risen to £18.9bn, of which Londoners and London businesses have contributed about two-thirds, according to business group London First.