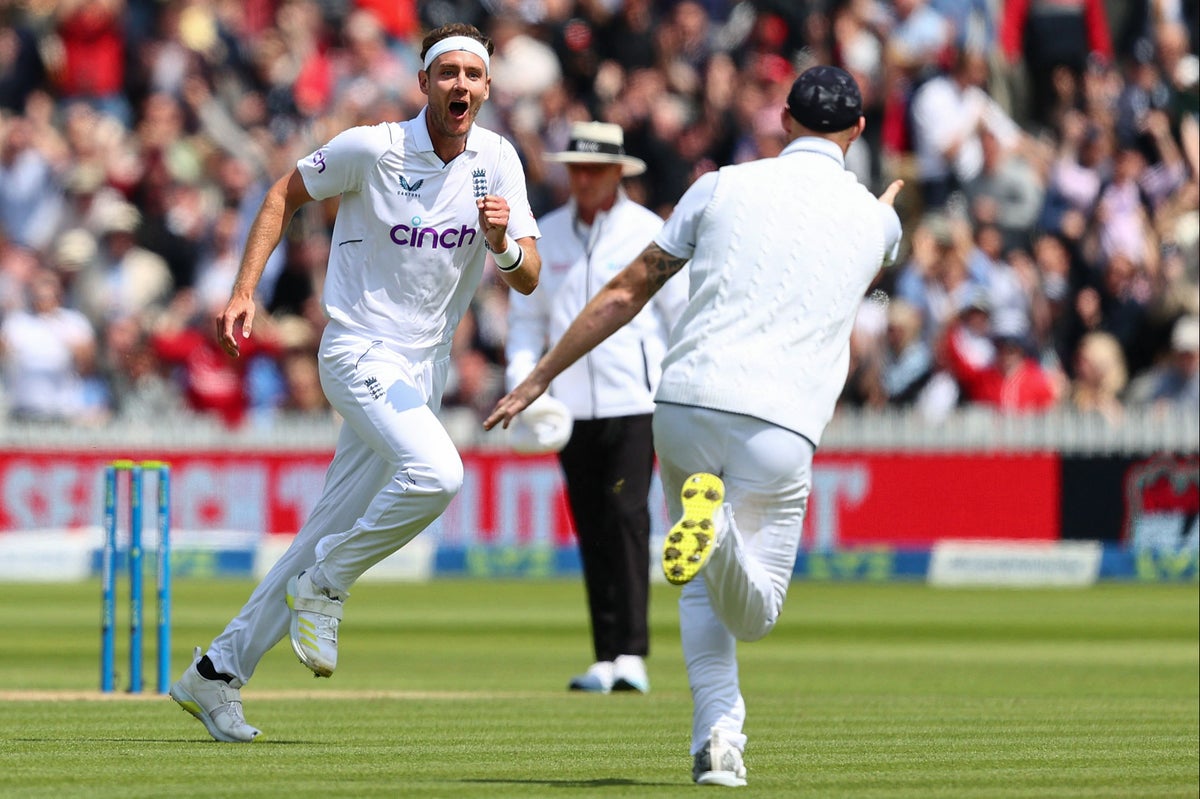 hree wickets in three balls in a remarkable Stuart Broad over sparked an England fightback on the third morning at Lord’s, and leaves them needing 277 to win the opening Test against New Zealand.

In another dramatic morning session, England swept up New Zealand’s first six wickets for 34, then reached lunch on 31 for one.

Alex Lees was the man to go, bowled shouldering arms to a beautiful ball from Kyle Jamieson. Lees had played some positive strokes on the way to his 20, but fell shortly before the break.

New Zealand had dominated the second half of the second day, with Daryl Mitchell and Tom Blundell sharing a fifth-wicket partnership that flew in the face of a game dominated by the bowlers.

After the start was delayed by 30 minutes due to rain, both men resumed in the nineties, with Mitchell driving his first ball of the day through extra cover for three to reach his second Test century, with his celebration matched in vigour by his team-mates on the visiting balcony.

England took the new ball at the first opportunity, the second over of the day, but it was not until the seventh that the game sparked into life.

Broad found a beauty to have Mitchell caught behind, then Colin de Grandhomme and Jamieson lasted just a ball each – but departed in very different fashion.

De Grandhomme was struck on the pad by Broad, with England appealing vociferously. As the umpire said no, Ollie Pope, eagle-eyed at fourth slip, threw down the stumps with the batter out of his ground.

A ball later, Jamieson was bowled having taken an age to get to the crease.

Tim Southee threw the bat in search of quick runs, but Blundell was unable to make it out of the nineties. Jimmy Anderson nipped a beautiful ball back in and pinned him lbw, with his review in vain.

The two debutants, swept up the final two wickets, with Matt Potts trapping Ajaz Patel in front, then Matt Parkinson having Southee caught at slip. That was Parkinson’s maiden Test wicket, while Potts’ scalp capped a fine debut in which he has taken seven for 68.

The target of 277 was the same as England chased against Pakistan at Old Trafford in 2020, their last successful significant chase.