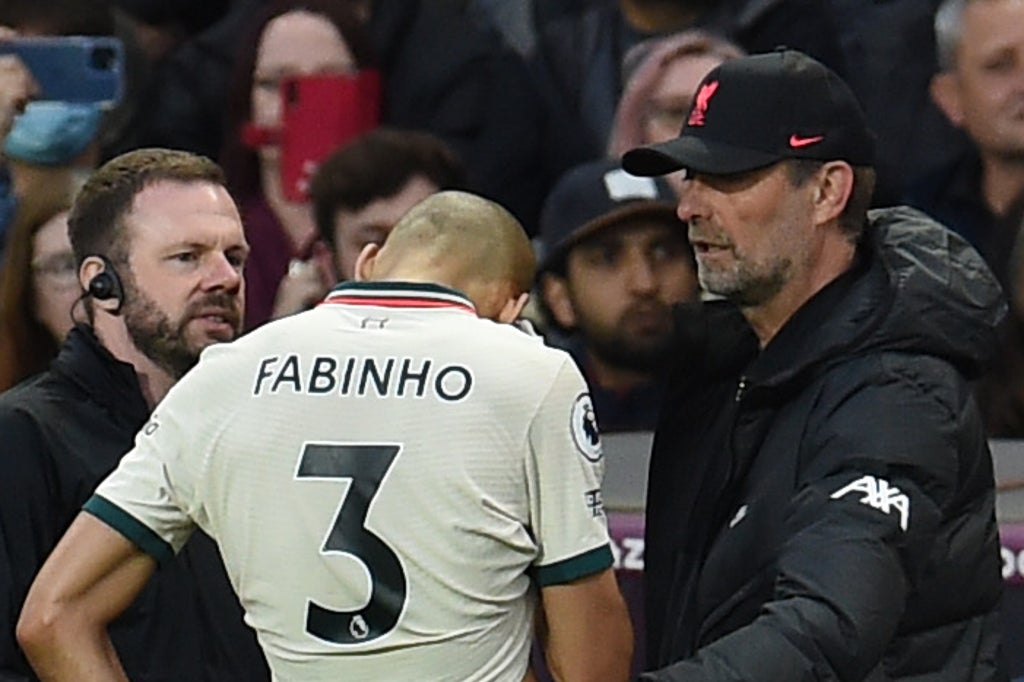 The influential Brazilian midfielder is now a huge doubt for this weekend’s showpiece at Wembley after going down with a hamstring issue during last night’s Premier League meeting with Aston Villa.

Fabinho was substituted after just half an hour of a nervy 2-1 victory in the Midlands that kept Liverpool’s quadruple and title hopes alive, replaced by captain Jordan Henderson.

The issue occurred after he had given the ball away cheaply in midfield and then rushed back to attempt to atone for his mistake, tussling with Philippe Coutinho before pulling up and holding the back of his thigh.

The 28-year-old was not one of the players rested by Klopp, who left out the likes of Ibrahima Konate, Andy Robertson, Thiago Alcantara and Mo Salah ahead of the cup final, with Joel Matip, Kostas Tsimikas, Curtis Jones, Naby Keita and Diogo Jota drafted in instead.

Fabinho would be a considerable loss for Liverpool’s second cup final showdown with Chelsea in the space of three months, though Klopp is unable to say at this stage if the player will miss out or not as he expressed regret over his decision to start him at Villa.

“I don’t know,” Klopp said when quizzed about the severity of Fabinho’s injury at Villa Park. “He felt a muscle, not too much. It was not the thigh, but the other side (hamstring). He is quite positive but I’m not sure what I can take of that, to be honest. We will see.

“I can’t say when he’ll be ready. Nobody has an answer for that. He has a good feeling and that gives me a better feeling than I had when I took him off.

“If you ask me now, I’d say leave Fabinho out (for this game) but I can’t turn that back. He was completely fine before the game.”

While Konate, Henderson, Thiago and Salah remained part of the matchday squad against Villa, stalwart left-back Robertson was left out completely, raising concerns that he too may be carrying an injury before the cup final.

However, Klopp quickly moved to allay those fears, insisting he simply wanted to give the Scotland defender a break and boost his bench options with more firepower now Roberto Firmino has fully recovered from a foot complaint.

“The rest came through without too many problems,” Klopp said. “Robbo wasn’t in the squad because I wanted to give him a rest at home and brought another striker into the squad if we needed. That’s it. Apart from that, we should be fine.”