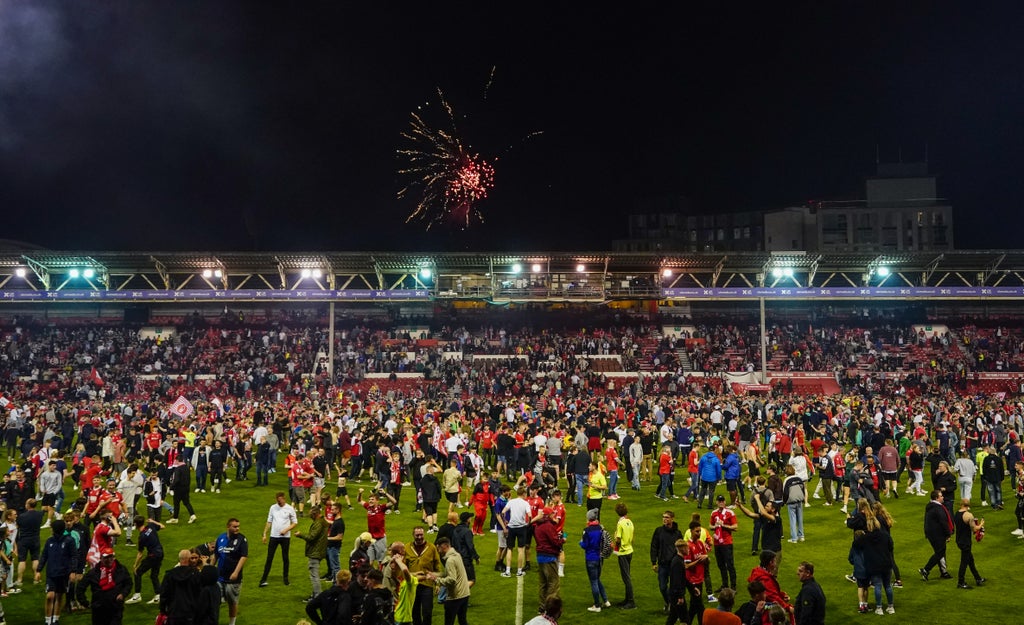 The Premier League, the EFL and their clubs are receiving advice from the Crown Prosecution Service on how to build the strongest cases possible against any individuals that attack players on the pitch.

The issue of crowd disorder and player protection is under the spotlight after the end of the regular Football League season and the play-offs were marred by pitch invasions.

A Nottingham Forest season-ticket holder, Robert Biggs, was jailed for 24 weeks on Thursday after he deliberately charged at Sheffield United player Billy Sharp at the City Ground earlier this week, headbutting him and knocking him to the ground.

There was a further pitch invasion at Northampton on Wednesday night, when a man came onto the field and barged into Mansfield’s Jordan Bowery during the League Two play-off semi-final second leg. No arrest has yet been confirmed regarding that incident.

The CPS said it is currently working with clubs, player bodies and organisations like the Premier League and the EFL to explain what sort of evidence is required to charge in order to help clubs and the leagues protect their players.

Douglas Mackay, the CPS lead prosecutor for sports, said: “Over recent years and months there has been a significant rise in football-related criminality compared to pre-pandemic levels.

“At the CPS, we play a crucial role in tackling these crimes and making our national sport inclusive, safe to watch and play in. There is no place for violent criminal acts in football, and incidents such as these have a significant impact on victims.”

Among the types of evidence clubs are advised can assist in a prosecution are CCTV footage, mobile phone video, body-worn video (BWV) footage from security officers and eyewitness statements.

Mackay’s reference to a rise in football-related criminality compared to before the Covid-19 pandemic is supported by data released from the UK Football Policing Unit earlier this year.

Reports of disorder were up by 36 per cent in the first half of this season compared to the same period in 2019-20.

The EFL’s security and operations advisor Bob Eastwood welcomed the sentence handed to Biggs for “an unprovoked and cowardly act of violence”.

The league has indicated it will consider what more can be done to tackle the issue of crowd behaviour, saying in a statement on Wednesday: “Over the summer we will consider what further measures are now at our disposal, including the potential use of capacity reductions or other similar mitigations.”

Culture Secretary Nadine Dorries was asked whether the government could do anything to ensure player safety but told the Digital, Culture, Media and Sport (DCMS) committee: “What happens on a football pitch actually is the responsibility of those governing organisations and the club itself.

“I think it’s down to individual clubs to ensure that there are appropriate levels of safety for their players in place on these pitches and that they put the right measures in place.”

The Forest fan who attacked Sharp has been given a 10-year football banning order as well as the custodial sentence.

Policing minister Kit Malthouse said on Thursday that banning orders of up to five years could be imposed on any individual convicted of taking or selling class A drugs at a match, amid concerns drug use is fuelling football violence.

Malthouse said: “It’s been a thrilling football season, but at some games we’ve seen ugly violence that has shocked all the leagues.

“More and more the police are finding class A drugs at the heart of that disorder and so we must act. The football family wants every ground to be a safe space for fans, especially children, and so do we.”

Cheshire Police Chief Constable Mark Roberts, the National Police Chiefs’ Council football policing lead, welcomed the move and said: “I am pleased the Government has updated the Football Banning Order legislation to counter the growing issues of disorder we have seen, in part driven by the use of class A drugs.

“Policing and football authorities all support this measure and it is an important step in ensuring that the use of drugs at football is tackled so the majority of fans, particularly those with families, can enjoy themselves without suffering anti-social behaviour and violence.”