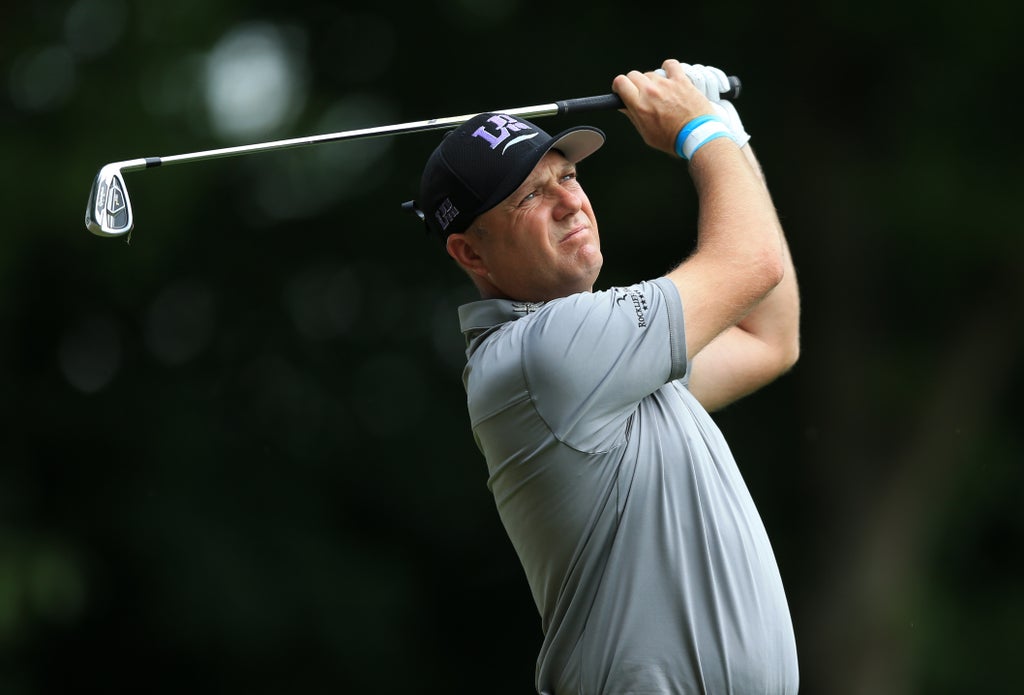 There are not many players who can boast about beating Rory McIlroy in a play-off and leading a major championship, but Graeme Storm is a proud member of that exclusive club.

The victory over McIlroy came on the third extra hole in the 2017 South African Open in Johannesburg, 83 days after Storm had lost his European Tour card by just 100 euros.

It was the Hartlepool professional’s second victory on the circuit, his first coming in the 2007 French Open and he ultimately secured his US PGA Championship debut at Southern Hills six weeks later.

As temperatures reached triple figures in Tulsa, Storm started his opening round on the back nine with consecutive birdies and picked up further shots on the 13th and 16th to reach the turn in four under.

The former Amateur Championship winner could only find one birdie on the front nine, but a bogey-free 65 gave him a two-shot lead over two-time major winner John Daly, with defending champion Tiger Woods carding a 71.

“It was 102 degrees and about 80 per cent humidity and it was like being in Malaysia, but hotter,” Storm told the PA news agency. “I think I played eight weeks in a row so I was kind of struggling.

“After I played the Open I shouldn’t have played the Deutsche Bank but it was a big event and I felt I was still in good form and wanted to keep playing until I ran out of gas, and I probably ran out of gas at Firestone.

Graeme Storm, 21, made golfing history when he lined up for the winning Great Britain and Ireland Walker Cup team in 1999 with his mother Jane as his caddie (PA Archive)

“So to be top of the leaderboard after the first round of the US PGA the following week was kind of a little bit, ‘How did that happen?’

“The golf course suited me. You didn’t have to hit it a long way, it was quite tight. I played pretty well that day but that’s when it all hit home because I had to do all the press.

“I was getting asked questions about Tiger Woods, all these different people. I did a full sit-down press conference then each different TV station, then radio.

“It was quite surreal and I can understand why the best players in the world have their agents there to say, ‘enough’s enough’ – it was just a little bit too much so I didn’t get any rest really, any time to chill out.

“Because I was off late on Thursday and early Friday I got home in the dark and came back to the golf course in the dark.

“When I got back to the hotel I got some room service about 10pm and tried to watch a bit of TV to try and switch off, but every channel was golf and my name kept coming up.

“I didn’t get much sleep that night and I was worried about missing my alarm call, which normally I don’t think about but when you are leading a major it’s obviously different.”

The alarm was essential as Storm was in the first group out on Friday morning and, after bogeys on the second and third, he responded with birdies on the next two holes to restore his overnight lead.

However, a bogey at the seventh was followed by a double bogey on the next and Storm eventually signed for a 76 to fall seven shots behind Woods, who shot 63 and lipped out for a birdie on the last to card the lowest round in major history.

Further rounds of 74 and 78 meant Storm finished the week in a tie for 62nd, and also with just 13 clubs in his bag for the trip home.

“As a week overall it was a great week, you get so well looked after and I did enjoy it,” Storm added. “But I remember towards the end getting a little ratty with myself.

“I remember walking off the 18th on Sunday and giving my putter to some little boy because I’d putted poorly over the weekend and just went, ‘there you go son, you have that, it’s no good for me’.

“Someone’s got a nice ‘Yes!’ putter stashed away somewhere.”

Storm still has the shirt he wore in the first round, as well as those from his victories in the Amateur Championship, France and South Africa, but has yet to get them framed to display at home.

Of more pressing concern is his current form after several years plagued by a wrist injury which has required several operations and meant he missed the entire 2019 season.

“I’ve had nerves cut in my wrist so I can’t hit certain shots that I used to be able to,” Storm said. “There’s good stuff in there but a lot of bad stuff.

“I’ve played 485 tournaments and I’d like to get to 500, but I’m not going to financially kill myself trying to chase something that’s not going to happen. There is a little bit of fire left, but I don’t know how much.”