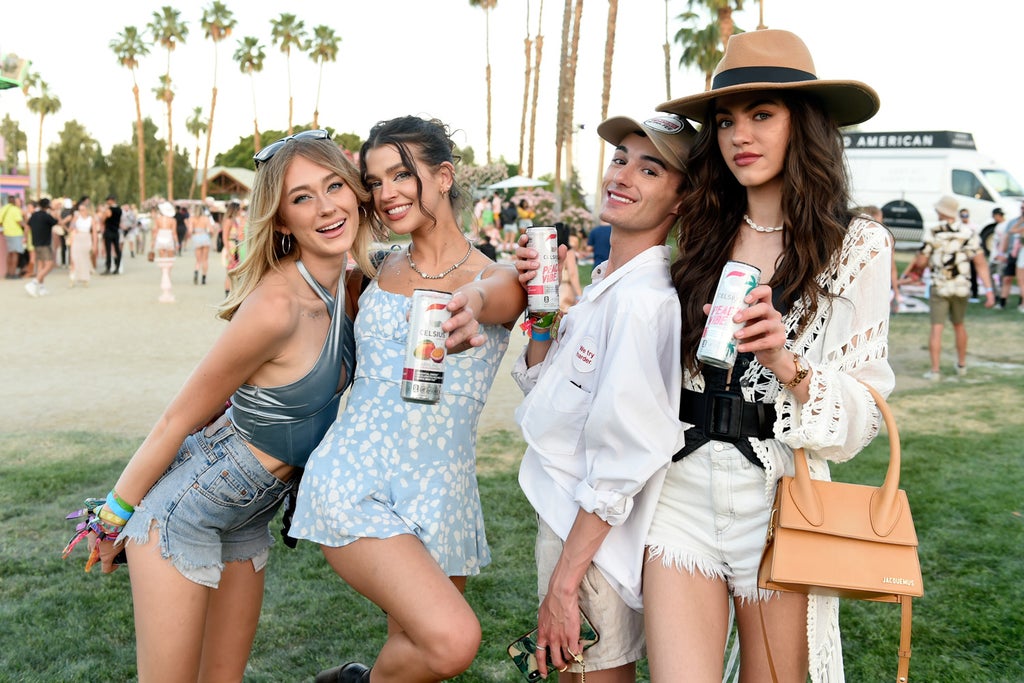 They were supposed to be transported to the Merv Griffin Estate for the super- exclusive Revolve Festival (aka, “the Influencer Olympics”) – an annual event held during the first weekend of Coachella – where they would get to rub shoulders with the likes of Kim Kardashian and Timothée Chalamet, vibe out to performances by Post Malone and Jack Harlow, and take social media content at various highly curated photo-ops.

But, things didn’t quite go to plan.

“Sources on the ground telling us there is apparently drama going down at Revolve Festival, that ‘sinks to level of Fyre Festival.’ Influencers stranded in the dirt with no water, under the hot sun for HOURS, waiting for buses that aren’t coming to bring them to actual festival.” Tweeted Joseph Kapsch, the exectuvie editor of LA Magazine, on Saturday evening.

“Alleged fights, screaming, everyone is dizzy.’ @LAMag told that police are coming. AND in an ‘Only in LA Moment: Coachella Edition: Security had crowds of influencers yelling how important they were and why they deserved the first seat.’” He continued.

Since his viral twitter thread, TikTok has been awash with firsthand accounts of invitees who were involved in the debacle which has since been labelled Fyre Festival 2.0. While some call the nod to the disastrous 2017 luxury music festival-turned-living nightmare — where guests paid $100,000 for mattresses on rain-soaked floors, meals of cheese slices on bread and their luggage to be tossed into an unattended, unlit car park — a bit of an over exaggeration, others were quick to defend the comparison.

“Influencers get a bad reputation for acting entitled. However, influencer status aside, many people were simply outside waiting in the heat for two or three hours without any water,” said creator Averie Bishop in a video that has since garnered 3.3million views. “People from different lines began jumping gates, hopping into the road in front of buses and shoving each other out of the way to get on one of the buses.”

TikToker Hannah Kosh, who said she was at the 2022 Revolve Festival, shared a similar description. “You guys, it was all of that and more,” Kosh noted in a video. “People were raiding the buses, the bus drivers refused to come back, I saw three people pass out in line myself—wild.”

Another TikToker, Kristi Howard, said she flew in from Nashville with her boyfriend to attend the event, but didn’t manage to get inside. “Waiting 5 hours in line like we were told didn’t get us anywhere thx to great security & organized transportation,” she captioned a video where she cussed the influencers who pushed their way in. “Now I love Revolve, everything I wear is Revolve, but Revolve Festival was a sh**show, it was a disaster,” she continued in another video, where she also insisted that she’s “not entitled at all,” but there was “poor transportation, communication, and bad management” that ruined the experience. Kristi also complained of “randos” who behaved badly, “shoving and acting like psychos.”

While she conceded that people who did get into the event looked like they had fun and posted a lot of great photos, she noted that they are expected share content to as part of their invitation. Bishop, who was invited but ended up not attending after hours of waiting for the festival-provided shuttle, said she was offered $2,000 worth of free clothing with her invitation, but was expected to post 15 videos at the event. However, for some even more was expected in exchange for the highly coveted ticket. Creator @mariicaballeroo went viral ahead of the weekend for sharing an email showing that she was asked to spend $2,000 on Revolve product in exchange for a ticket, with another creator @bellagerard calling out Revolve for “gaslighting micro-influencers into feeling special just to trick them into free brand promotion”.

For Revolve, an online fashion retailer valued at nearly $1.5 billion, the weekend party is a lucrative brand opportunity. According to data from Traackr, an influencer marketing platform, the Revolve Festival accrued more than 5,000 posts from 700-plus influencers as of Monday morning, which resulted in more than 25 million engagements (in terms of likes, comments, shares and more) for the popular online fashion site. Over on Instagram there were also 4,800-plus posts, while TikTok had 520 posts about the event, with nearly 12 million engagements and more than 90 million video views.

Lauren-Ashley Beck, another lifestyle creator who attended the festival, posted that as a result of these brands having such big dominance, “Influencers get a bad reputation because they tend to lie about their experience because of fear of experiencing repercussions at the hand of the company.”

In an Instagram post Monday, Beck continued that she was grateful to be invited but warned her followers to “not let the internet fool you.”

“A lot of influencers and people in general want to show you the ‘highlight reel’ of their lives,” she captioned the post. “I promise their lives aren’t any cooler than yours. … I can’t be out here in these influencer streets lying to y’all.”

Following the backlash, the brand released an apology and promised to do better going forward. “In anticipation of the high level of interest in attending REVOLVE Festival this year, REVOLVE worked closely with all appropriate city and safety authorities to ensure a safe and secure path for guests to access the 2-day invitation-only event,” a representative told E! News. “With an event of this magnitude, city regulations mandate an off-site location for guest check-in and parking, as well as licensed shuttle transportation to and from the venue. The off-site lot was set up with guest parking, as well as rideshare drop-off and pickup access with added WIFI for car booking, restrooms, shade, water, medics and security.”

They later went on to address the transportation issue. “As the festival was reaching capacity late Saturday afternoon shuttle access to the venue was limited in order to remain in compliance with safety requirements causing longer wait times for entry and resulting in some guests not being able to attend the festival. The safety of our guests is of the utmost importance to us and we will always make that a priority.”

The representative concluded: “We sincerely apologize to all the guests who were impacted. We always strive to provide a great experience and we promise to do better.”

Whether or not the influencers will accept their apology, our collective appetite for the drama appears unwavering. In fact, TikToker Publyssity even theorised that it was some elaborate PR stunt, which although probably isn’t the case, has definitely got even more people talking about the weekend festival.

The Evening Standard has reached out to Revolve for a comment.