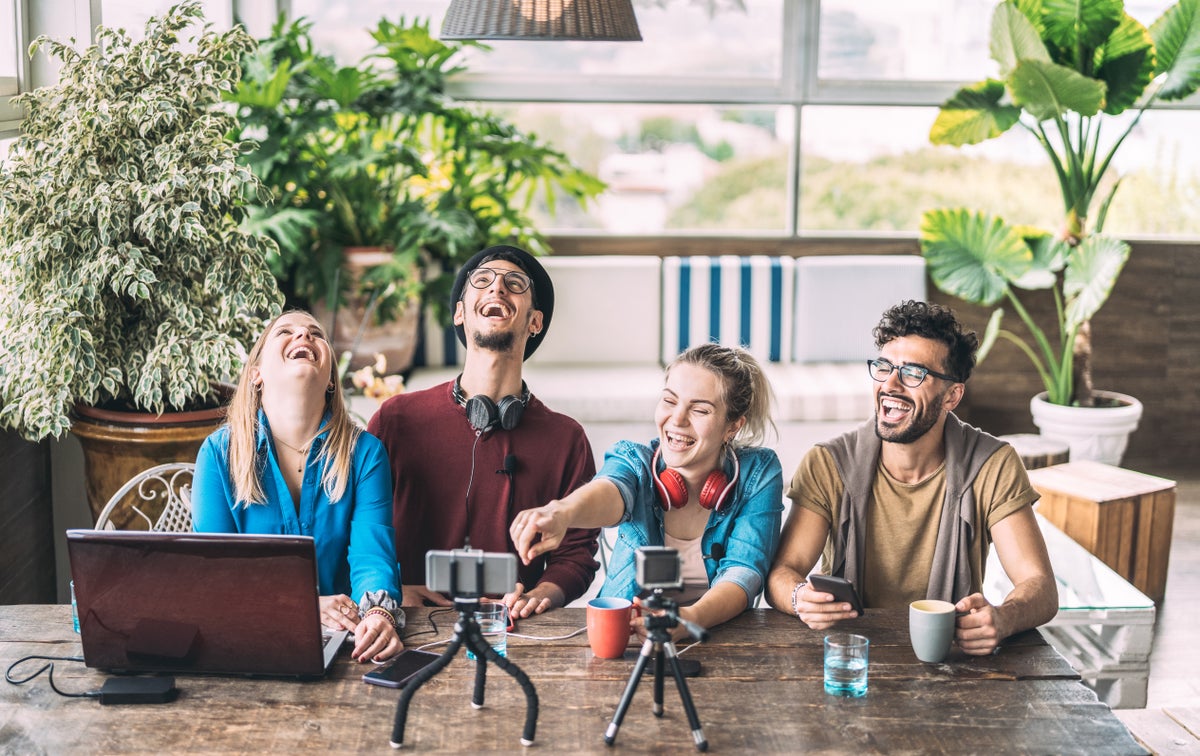 adisha Kaur-Singh, 22, from Enfield, has had five jobs since she graduated last June. “My older friends are just working to get money, but my goal is to be extra passionate about what I do,” she says. “I like working and having my own income, but I also want free time to dabble and experiment. I don’t want to just work to live or whatever the saying is. That concept is outdated.”

After stints in various customer service and copywriting roles, next week Kaur-Singh starts a new job at TikTok. On her Insta bio, she calls herself a “Digital Creator”. “My number one priority when taking a job is whether the company aligns with my ethics and vision,” she says. “Then it’s salary and then it’s progression — I don’t want to be stuck in the same job forever.”

Kaur-Singh is pretty typical of Gen Z job hunters — those born between 1997 and 2012 — who are looking for something different from the world of work than even their slightly-older Millennial colleagues. “Gen Z don’t want to settle for so-so jobs where they are underpaid, under-appreciated and overworked,” says Samantha Hornsby, CEO of ERIC, an app which helps young people find jobs in the creative industries.

From the anti-work memes going viral on TikTok right now, you would be forgiven for thinking that the youngest generation to enter the workforce aren’t interested in climbing the career ladder at all. “There’s a misconception that this age group is spoiled or lazy, but actually they’re incredibly hard working, just with different goals,” says Hornsby.

“They’re not afraid to quit jobs that aren’t right for them, often publicly, on social media, and they will name and shame employers who aren’t getting it right.”

The 12.6 million Gen Z-ers in the UK right now might well enter an industry which their parents won’t have even heard of. Research from Talking Futures has found that more than two-thirds of parents of 11 to 18-year-olds in England feel overwhelmed as their children express interest in careers they know nothing about.

“It’s a candidates’ market right now and junior positions are proving hardest to fill,” says Tray Durrant from Soho-based recruitment firm Bain and Gray. “Companies looking for just above entry-level candidates with one or two years’ experience are really struggling.

“Partly it’s because young people haven’t been able to get the right experience because of the pandemic, and also it’s because travel has finally opened up so many younger people are taking delayed gap years. But I think the main reason is that Gen Z are looking for something very different from work — and employers are finding it hard to understand and manage them.”

So they may not have a “dream job”, but what do Gen Z’s ideal working conditions look like?

Gen Z are doing things differently in the workplace

If you have a Gen Z-er in your team, chances are they might have multiple part-time jobs, or at least one side-hustle. And they won’t have any qualms about asking the boss for flexible hours to work on their passion project. “I think it’s important to have creative outlets that aren’t just your main job,” says Kaur-Singh. “I think employers should encourage that.” “This generation has grown up with portfolio careers and the gig economy and they’re incredibly entrepreneurial,” agrees Hornsby. “Research found that 62 per cent of Gen Z are planning on starting their own business. This is why employers need to be flexible if they want to hang on to young talent.”

According to data from managed office platform, Kitt, a quarter of Gen Z want a more Instagrammable office. But that doesn’t just mean more flattering lighting for all those mirror selfies. “My ideal office is light and airy and spacious,” says Kaur-Singh. “It’s easy to lose motivation when you’re in a little cubicle — you want to come to work and feel inspired.”

“Generation Z are looking for a workspace that will serve them and the culture,” says Hornsby. “I think it’s less about slides and ping pong tables and more about really well-designed spaces that they can work and socialise seamlessly from. And if it has the wow factor for Instagram, all the better.”

Many of us are following a hybrid model now, which suits Gen Z perfectly.Research from Asana found that 68 per cent of them want to be in the office a few days a week. “I love coming into the office,” says Milo Latham, 24, from Clapham. He has worked for the retail receipts app Slip since March. “I personally prefer to come in five days a week, but most of my friends my age say they want three. I think you grow more as a person when you’re in the office, you can learn from your colleagues and you’re more productive.”

“What I’m seeing is that young people want choice and autonomy over whether they’re working at home or in the office and most of them do prefer the office,” says Hornsby. “It’s not that surprising when you realise that many of them will be trying to work from cramped house-shares if they’re at home, and they’re keen to learn by osmosis in the office.”

Whether it’s executives displaying their pronouns in emails, or a diversity, equity and inclusion policy, Gen Z wants to work for a socially-responsible company. “They want proof of this responsibility in action, too, not just lip service to it,” says careers coach Alice Stapleton, who works with Gen Z clients. Indeed, 73 per cent say they would quit over a clash of values with their employer.

“If a company had bad morals or weren’t making efforts to be paperless or carbon neutral I wouldn’t want to be associated with them even if the pay was great,” says Sian Roberts, 22, who lives in Hampstead and works in recruitment. “My ideal company to work for would be something sustainable like a charity.”

“The research is quite conflicting on how important money is to Gen Z,” says Hornsby. “We know they’re more likely to take a pay cut to work for a company they think is doing something good for the world. But unlike perhaps the Millennial generation, they’re not willing to work for free. They know their worth and there’s a level of expectation that they’re not willing to compromise on.”

Kaur-Singh agrees. “If you live in London, everything is so expensive right now.” But for Milo Latham, his pay cheque comes quite far down his list of priorities. “When I was at university I always thought money would be a big motivator for me,” he says. “But as long as you’re getting by and have enough to have fun on the weekends it doesn’t matter too much. I actually left a very well-paid job in the City to work for this start-up.”

While Millennials might have cared about their job title, and Baby Boomers were obsessed with their business cards, Gen Z couldn’t care less. “Getting hung up on titles is a bit silly,” says Latham. “That feels like a hangover from corporate culture which is really old-fashioned now. I could be called whatever it’s the work I’m doing that matters.”

“Social media has changed Gen Z’s perspective of what’s achievable and what isn’t at their age,” says Hornsby. “So you will have 21-year-olds calling themselves ‘Head of Content’ because they have an Instagram account. The on-the-job experience and the title doesn’t always marry up and they also don’t always know what titles mean. We work with a lot of young people in our community who will see a job title such as ‘Account Executive’ and they’ll scroll right past, not realising that that’s actually a junior role.”

As you might expect from a generation which is graduating into one of the most uncertain times in history, Gen Z-ers don’t care too much about a pension plan. A Fidelity retirement planning survey found that 45 per cent of “next gen” — defined as 18 to 35-year-olds — “don’t see a point in saving”.

What they do care about is wellbeing and they want a benefits plan that reflects that. “I’m seeing young people who expect a subscription to an online therapist as standard,” says Hornsby. “They prioritise their mental health in a way that previous generations never did. They also want flexible benefits they can pick and choose from, whether they want extra holiday days or volunteering days and so on.”

Sian Roberts says that a gym membership and a fully-stocked fridge at work are her dream benefits. “I think people higher up in a company on a bigger wage might not realise how much difference things like that make.”

Kaur-Singh says that now she’s “older” she’s worked out the value of healthcare benefits. “I’m only just now realising how expensive the dentist is.”

If Millennials drove The Great Resignation, then Gen Z are all about the Great Reshuffle. They are job-hopping quicker than you can say “P45”. Research from the website Careersbuilder found that Gen Z-ers spend an average of two years and three months in a role (compared with Baby Boomers who spend a whopping eight years and two months). LinkedIn discovered that job transitions had increased 54 per cent year-on-year. The number of Gen Zers transitioning jobs is even higher, at 80 per cent.

“I was watching a careers coach on TikTok who said you shouldn’t stay in a job more than two years,” says Roberts. “I think two years or a year and a half is ideal. But if it’s not the right job for you then I think you can quit after a few months. I have lots of friends who got big jobs in the City and have left after three months to go back to working in pubs because it wasn’t for them. Life’s too short to commit yourself solely to your career.”