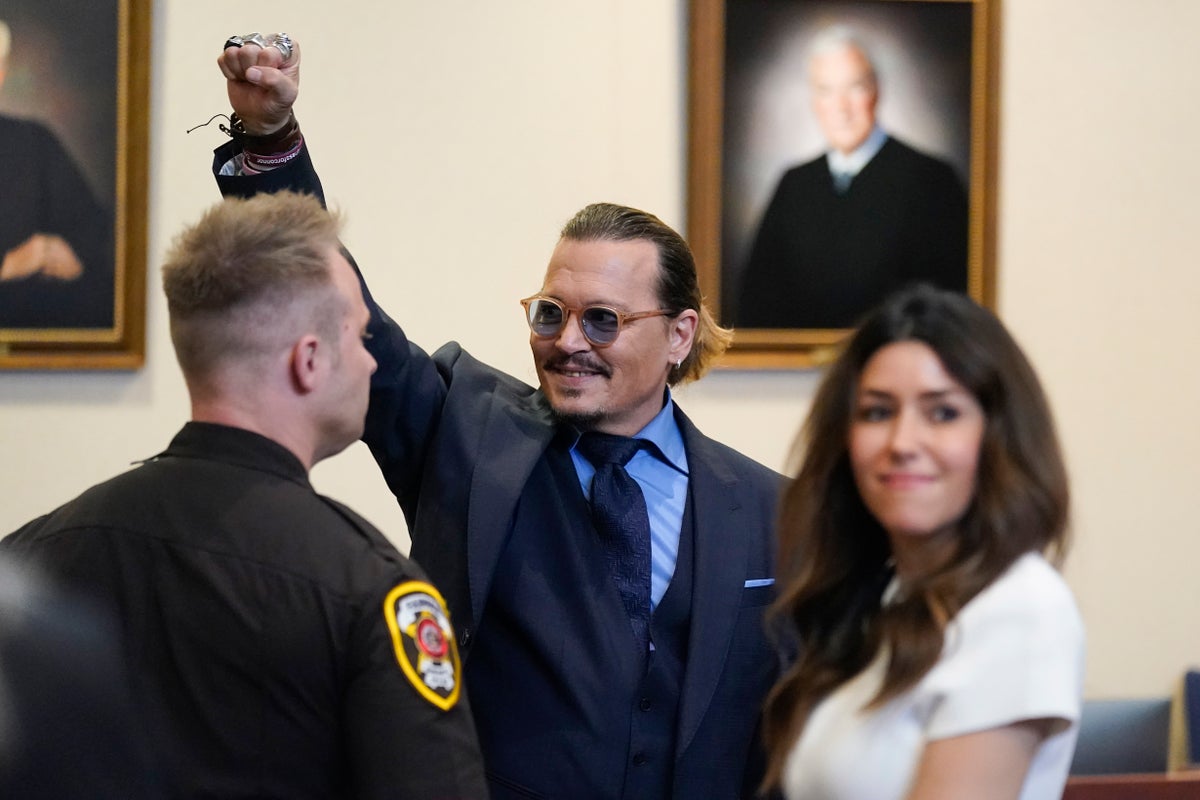 ohnny Depp said he “feels at peace” as he was seen relaxing in a pub in Newcastle after winning his multimillion-dollar US defamation lawsuit against former wife Amber Heard.

The actor said he was “truly humbled” after jurors returned verdicts in his favour on Wednesday after six weeks of evidence and roughly 13 hours of deliberation.

Mr Depp sued the Aquaman star for 50 million dollars over a 2018 op-ed she wrote in the Washington Post, titled: “I spoke up against sexual violence — and faced our culture’s wrath. That has to change.”

The article does not mention him by name, yet his lawyers said it falsely implied he physically and sexually abused Ms Heard while they were together.

Shortly after the verdicts were read out at Fairfax County District Court, in Virginia, the actor was pictured shaking hands with fans and drinking with musicians Sam Fender and Jeff Beck at The Bridge Tavern in Gateshead.

In his statement, issued through his spokesperson, the actor said his decision to pursue the case “was only made after considerable thought” and his goal had been to “reveal the truth, regardless of the outcome”.

“Six years ago, my life, the life of my children, the lives of those closest to me, and also, the lives of the people who for many, many years have supported and believed in me were forever changed,” he said.

“All in the blink of an eye.

“False, very serious and criminal allegations were levied at me via the media, which triggered an endless barrage of hateful content, although no charges were ever brought against me.

“It had already travelled around the world twice within a nanosecond and it had a seismic impact on my life and my career.

“And six years later, the jury gave me my life back. I am truly humbled.”

Mr Depp continued: “Speaking the truth was something that I owed to my children and to all those who have remained steadfast in their support of me.

“I feel at peace knowing I have finally accomplished that.”

He said he had been “overwhelmed by the outpouring of love and the colossal support and kindness from around the world,” adding: “I hope that my quest to have the truth be told will have helped others, men or women, who have found themselves in my situation, and that those supporting them never give up.”

Mr Depp has joined musician Jeff Beck on his UK tour this week, appearing on stage to sing with him at various venues across the UK (Raph Pour-Hashemi/PA) / PA Media

Concluding the statement, he added: “The best is yet to come and a new chapter has finally begun.

Mr Depp has joined Jeff Beck on his UK tour, appearing on stage to sing with him at various venues across the UK, including at the Royal Albert Hall on Monday and Tuesday.

The two are rumoured to be performing together again in Gateshead on Thursday night.

Speaking outside the court in Virginia, the actor’s lawyers Benjamin Chew and Camille Vasquez said they were “truly honoured” to have represented him and were “so grateful” to the jurors, and other members of court staff.

“It is time to turn the page and look to the future,” Mr Chew said.

Though Mr Depp was not present for the verdicts, Ms Heard attended the court in person.

Sitting between members of her legal team at the front of the courtroom, the actress looked downcast as the ruling was read out by the judge.

She had her head bowed and appeared to be listening intently to the verdict.

In a separate verdict, Ms Heard was awarded two million dollars (£1.6 million) in damages after her counterclaim against Mr Depp over comments made by his lawyer Adam Waldman, who allegedly referred to her abuse claims as a “hoax”, was found to be defamatory.

Following the verdict, the actress said she was “heartbroken” but “even even more disappointed with what this verdict means for other women”.

“The disappointment I feel today is beyond words,” she said in her own statement, which was shared on social media.

“I’m heartbroken that the mountain of evidence still was not enough to stand up to the disproportionate power, influence, and sway of my ex-husband.

“I’m even more disappointed with what this verdict means for other women.”

Ms Heard said the verdict “sets back the clock to a time when a woman who spoke up and spoke out could be publicly shamed and humiliated”.

She added that Mr Depp’s attorneys had succeeded in getting jury members to “overlook” freedom of speech.

“I’m sad I lost this case. But I am sadder still that I seem to have lost a right I thought I had as an American – to speak freely and openly,” she said.

The case was brought in Virginia rather than in California, where the actors live, because The Washington Post’s online editions are published through servers located in Fairfax County.

Witnesses have included family members, friends, colleagues, employees and other individuals including British supermodel Kate Moss, as well as both Mr Depp and Ms Heard.

During the course of the trial at Fairfax County District Court, legions of fans gathered outside in an attempt to enter the courtroom and observe proceedings.

Many lined up outside the courthouse in anticipation of the verdict and gave huge cheers as the verdicts were read out.