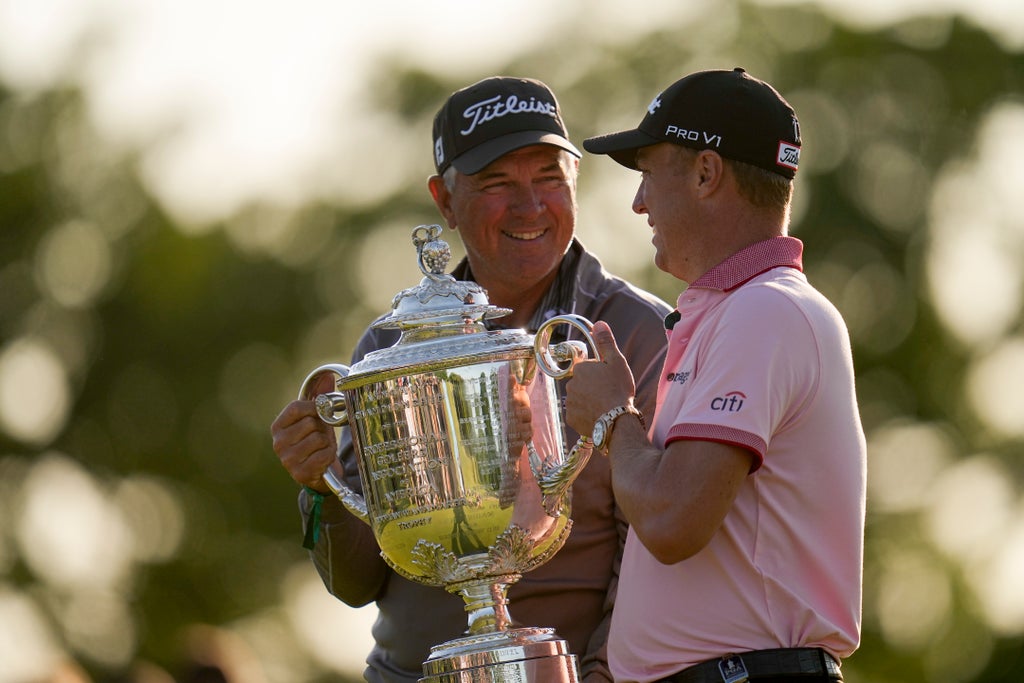 Justin Thomas has put the celebrations of his “unfathomable” US PGA Championship triumph on hold for another week.

Thomas lifted the Wanamaker Trophy for a second time on Sunday, defeating fellow American Will Zalatoris in a three-hole aggregate play-off after the pair had finished tied on five under par at Southern Hills.

The former world number one began the final round seven shots off the lead and was eight behind after playing his first eight holes in one over, including a bogey on the sixth following a shanked tee shot.

“I haven’t had a chance to watch the full coverage on Sunday, which I’d like to, but I did happen to see (that) when I was putting on nine, I was eight back,” Thomas said in a pre-tournament press conference ahead of this week’s Charles Schwab Challenge.

“I was eight back with 10 holes to go. That’s unfathomable. If I was looking at leaderboards, I probably would not have thought I even had a chance to win. It’s a huge learning lesson for me. You’ve got to play golf. Those majors and in golf tournaments, anything can happen.”

Thomas won his first major title in the 2017 US PGA at Quail Hollow but had gone more than a year without a win since his victory in last year’s Players Championship at Sawgrass.

“When you’re on a roll and you’re playing really well and you’re fortunate enough to have three, four, five-win seasons, I think you sometimes can take it for granted and forget how incredibly hard it is to win out here,” he added.

“I feel like I’ve been playing some of the best golf of my career the last year and have literally had nothing to show for it. It’s hard to win out here and you just don’t know when it’s going to happen again.

“For it to happen at the biggest stage, at a major, to win my second one, my family there, I couldn’t kind of believe that it happened.

“It was obviously a very fun and whirlwind of a weekend, I guess you could say, but we’ve been working really hard to try to get myself back in that situation, that scenario for a long time, and the five years has felt like an eternity since Quail Hollow.

“Definitely glad that I could finally answer the question of when am I going to get my second versus just being a one-hit wonder, if you will.”

Thomas stayed in Tulsa on Sunday evening before making the 300-mile journey to Colonial Country Club in Fort Worth, Texas, where he is joined by the likes of world number one Scottie Scheffler, Open champion Collin Morikawa and Jordan Spieth in a strong field.

Asked how he will maintain his motivation this week after such a big win on Sunday, Thomas said: “It’s just (about) putting it behind me.

“Obviously I want to enjoy it and I don’t want to just act like it didn’t happen because it did, but at the same time I have a week next week off potentially to just enjoy it and have some times with my family and friends if we choose to.

“I have a golf tournament this week, and I’m just trying to perform and play as well as I possibly can, and hopefully give us something else to celebrate.”