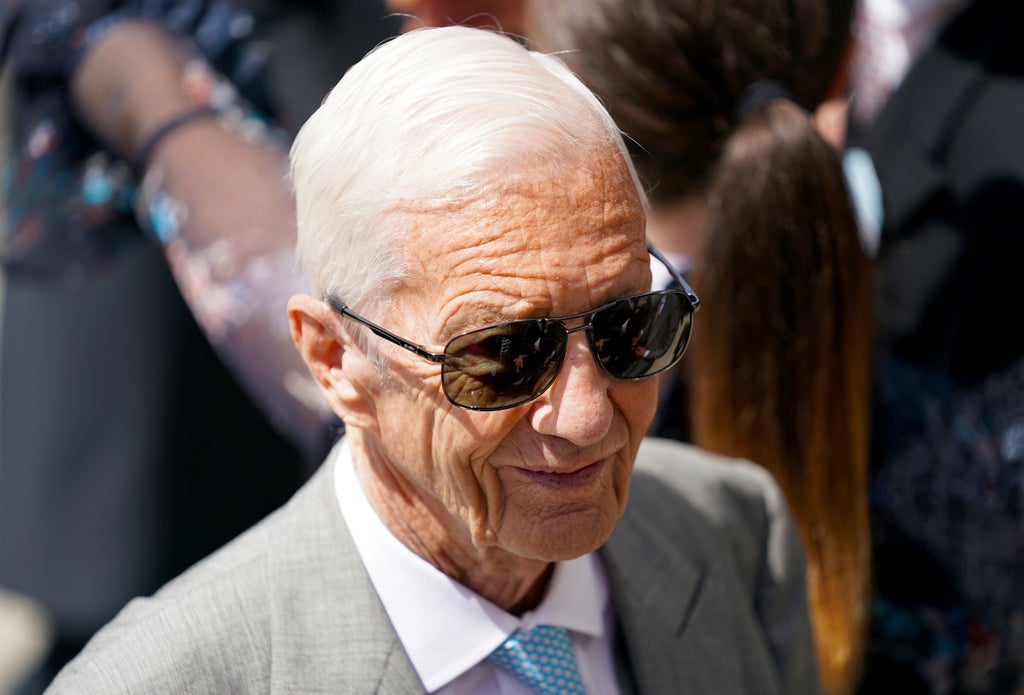 orse race jockey Lester Piggott has died at the age of 86.

The legend died in Switzerland on Sunday morning, his son-in-law and Derby-winning trainer William Haggas has confirmed.

“Sadly we can confirm that Lester died peacefully in Switzerland this morning,” he said in a statement.

“I really don’t wish to add much more than that at this stage, although Maureen will be making a statement later.”

Piggott made history as one of the greatest horse race jockeys of all time, including a record nine wins at Derby.

Already his family had great success with racing – his dad Keith was a trained Grand National winner, his grandfather Ernest rode to victory three times in the great steeplechase and his mother Iris was the daughter of Classic-winning jockey Fred Rickaby.

Impressively a young Piggott rode his first winner The Chase at Haydock in 1948 when he was just 12 years of age.

The last win came with Palacegate Jack at the same Merseyside track in 1994, a few weeks short of Piggott’s 59th birthday.

Following his success, he retired for a final time in 1995.

Piggott first won the Derby in 1954 aboard Never Say Die and he went onto win it eight more times, making history.

Key moments in his career:

1948: Piggott, aged 12, has his first ride in public on The Chase at Salisbury on April 7. The horse provides him with his first success at Haydock on August 18.

1950: He rides 52 winners as he finishes the season champion apprentice.

1960: Successes in the Derby and St Leger help to win a first jockeys’ championship with 170 successes. Marries Susan Armstrong on February 22.

1965: Rides eight winners at Royal Ascot, a score bettered only by Sir Gordon Richards with nine.

1966: Piggott wins fourth championship with his highest ever total 191, 94 clear of his nearest rival.

1970: Wins 2000 Guineas, Derby and St Leger on Nijinsky, the first horse to win the Triple Crown for 35 years. The pair also finish second in the Champion Stakes and Prix de l’Arc de Triomphe.

1981: Having split with Sangster the previous year, Piggott – now attached to Henry Cecil – wins 1000 Guineas on Fairy Footsteps a week after nearly losing an ear in a starting stalls accident.

1983: Teenoso carries him to his ninth win in the Derby.

1985: Retirement is announced at end of season. Rides 29th classic winner, Shadeed in the 2000 Guineas, but records only 34 victories, the last of which is on Full Choke at Nottingham, bringing career total to 4,349. Finishes second on final ride.

1986: Piggott sets up as trainer in Newmarket, saddling 30 winners including one at Royal Ascot.

1987: Wins first Classic as trainer with Lady Bentley in the Italian Oaks. Jailed for three years for tax evasion in October.

1988: Stripped of OBE. Released from prison after serving a year of sentence.

1989: Returns to saddle with three rides in Peru.