SAN DIEGO – Sixteen people walked into a room Sunday to decide whether Barry Bonds, Roger Clemens or Fred McGriff, among others, should be inducted into the Hall of Fame. They walked out in unanimous agreement that McGriff belongs and in overwhelming agreement that Bonds and Clemens do not. Welcome to Judgement Day, not just of a moment but of an era.

The Contemporary Baseball Era Committee of the Hall of Fame fixed the most egregious mistake of the past decade by the writers with the election of McGriff. Never able to crack 40% of the vote in 10 tries on the writers’ ballot, McGriff earned the vote of every man and woman in that room—a rarity in such committees that not even Bud Selig pulled off.

The clean sweep pointed out the folly of the majority of writers never getting behind a player who came to the plate more than 10,000 times and posted an .886 OPS. Only 14 other players to reach a Hall of Fame ballot—and not connected to PEDs—ever hit so well for so long and every one of them were inner-circle Hall of Famers.

McGriff suffered on the writers’ ballot in comparison to steroid users. He won home run titles with 36 and 35 homers before players and their numbers grew cartoonish. When he hit 32 homers in 1999, for instance, he finished 17th. At least half of the sluggers ahead of him were connected to PED use.

Then came Judgment Day. PEDs won the era but lost in that room, sending a signal to Bonds, Clemens and the like one week short of the 15-year anniversary of The Mitchell Report, the 20-month investigation that had their names all over it. The signal: forget it, you’re not getting into the Hall of Fame for the foreseeable future.

Fred McGriff was the player with the most home runs in baseball history who had not been elected to the Hall of Fame without being connected to PEDs.

These committees are important backstops to the writers’ voting process. More people in the Hall have been elected by these oversight committees—180 of 341, or 53%—than by the writers. The committees fixed the omissions of candidates such as McGriff, Minnie Miñoso and Larry Doby.

Hall of Fame players, executives and three media members (two of whom had voted for Bonds and Clemens previously) comprised the 16-person committee this time. There was some thought that Bonds and Clemens would do better with a jury of their peers than with the writers, having peaked at 66% and 65% on 10 tries with the writers. (Candidates need 75% support for election.) Instead, they fared far worse. The Hall members and their proxies made it clear they do not want them in their club.

The Hall does not announce complete voting results. It does this to spare a candidate embarrassment. The bottom feeders are announced only as getting “less than four votes.” Might be three. Might be zero. But no need to rub it in. That’s the support Bonds and Clemens received: too low to even be mentioned.

This is the legacy of PEDs. Players who used them made a conscious decision to bastardize the bedrock of competition: fair play. Rules or no rules, they did so knowing there could be consequences if ever their secret was discovered, which is why the behavior had to be covert and cannot, even a generation later, ever be admitted.

We get it. We get why they used. From Ken Caminiti, who told me in 2002, to Jason Grimsley, who just wrote about it in a book, many saw PED use as the rationalized price of competing and they did not apologize for it. But celebrating the choice with the highest honor in the sport? That’s a bridge too far for too many people.

Whether it’s 300 writers, 16 people in a room or a random sampling of dozens of people on the street, you are not going to find 75% of people who think PED use should be excused or celebrated. A majority might—as happened with the writers—but not such a super majority. 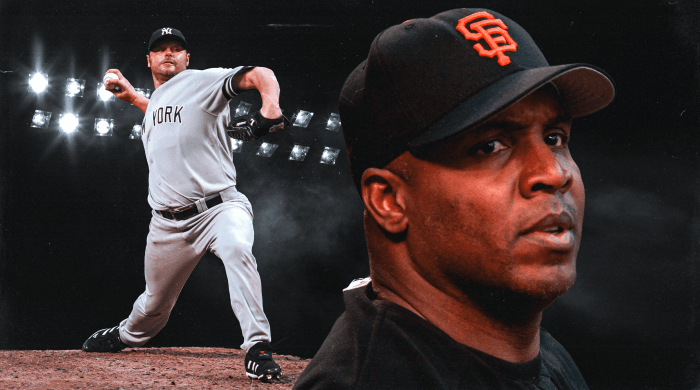 The Hall of Fame odds for Roger Clemens, left, and Barry Bonds are looking quite dim after their latest setback.

Bonds and Clemens have had 11 cracks at the Hall and are 0-for-11 each, including 0-for-2 with two separate bodies in the past 11 months. Their next chance will not come until 2025 at the earliest. A screening committee will decide whether they should go back on the next Contemporary players ballot. Mark McGwire still hasn’t received a second chance. And players such as Sammy Sosa, Jeff Kent, Kenny Lofton, Dwight Evans, Lou Whitaker, Keith Hernandez, David Cone and Bernie Williams will be looking for their first shot at the Hall’s second chance.

That Bonds and Clemens were not elected this time is not a stunner; their poor level of support is. Nearly as stunning was the tepid support for Curt Schilling, who as a candidate is Don Drysdale with better command and better postseason history—and a controversial Twitter account. Schilling received only seven votes. He is being kept out of the Hall because of his objectionable language long after he was done playing. There is no candidacy like his.

McGriff may have seemed the “safe” candidate on a ballot filled with controversy, but in fact he should have been in the Hall long ago. Context didn’t matter here. His career was inarguable. He hit 493 home runs (the most ever for anyone not previously elected and not tainted by PEDs), posted a .917 OPS in 50 postseason games, played the third-most games at first base and had a better OBP and slugging percentage and more 100-RBI and 30-homer seasons than Eddie Murray. Not bad for someone who said after getting elected, “I was cut from my high school team.”

Said McGriff, who played his last game 18 years ago, “It was well worth the wait.”

Even in the best moment of his baseball life, McGriff had to endure PED discussions. He wouldn’t say it, but his candidacy was harmed by those who used PEDs.

“I know I put a lot into this game, worked hard to get to this point,” he said. “I went out and I just played the game like it’s supposed to be played.”

It didn’t take long for him to be asked on his conference call about Bonds.

Ever classy, McGriff said, “Honestly, right now I’m going to just enjoy this evening. We can discuss that. I haven’t given it a lot of thought. I’ll give it some thought.”

Next July, McGriff will stand at a podium in Cooperstown, a place he said he has never seen, and give a speech as a newly minted Hall of Famer. He might be joined only by Scott Rolen, the returning candidate on the writers’ ballot with the most support (63%), unless you believe Carlos Beltran can get 75% support on his first try despite the stain of the Astros’ sign-stealing scandal. It may have taken too long, but judgment finally landed on the side of McGriff.