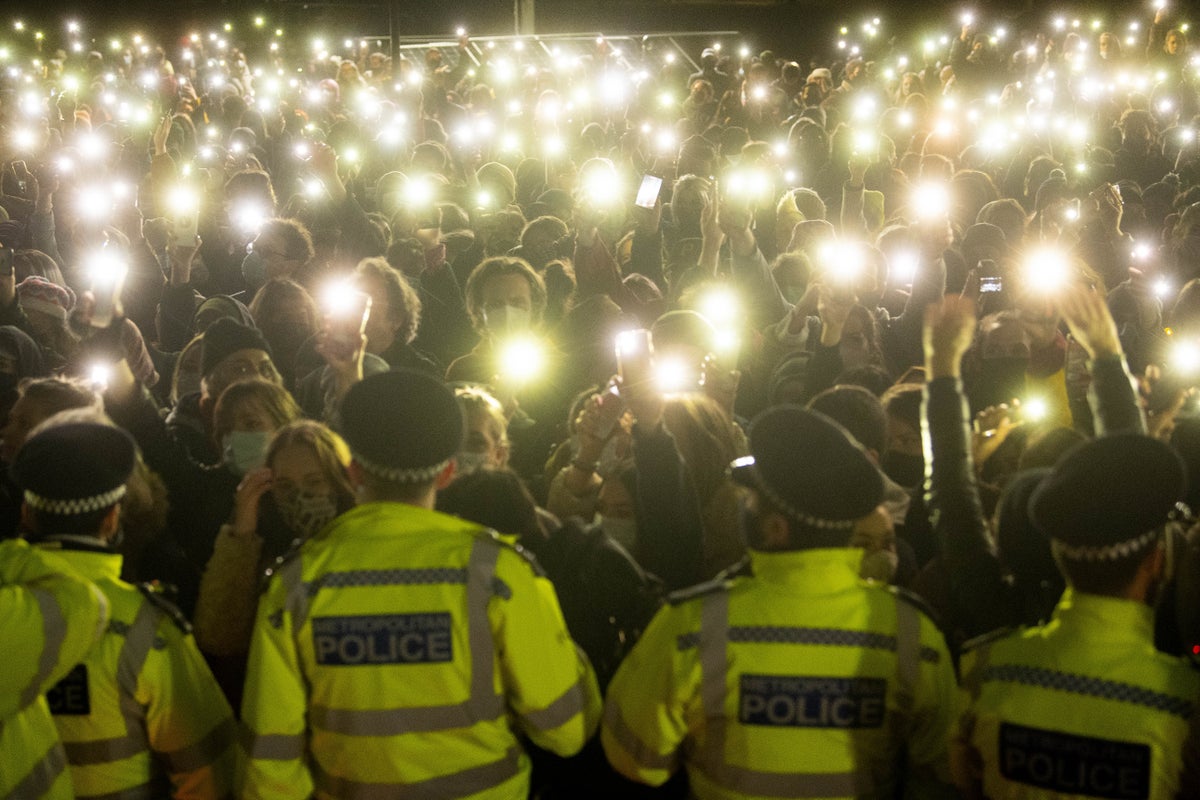 High Court judges concluded in March that the Met had breached the rights of organisers from Reclaim These Streets (RTS) when it stood in the way of a protest gathering in March 2021.

Scotland Yard adopted the position that any gathering, at a time of national Covid lockdown, would be against the law and threatened organisers with £10,000 fines if they pressed ahead with the event.

When RTS reluctantly withdrew and cancelled its event, a spontaneous vigil happened in the void, and was ultimately shutdown by the Met in ugly scenes which included women being pinned to the ground and handcuffed.

After its High Court defeat, the Met signalled its intention to appeal the decision, insisting it was seeking “clarity” on “important points of principle”.

However Lord Justice Holroyde ruled on Tuesday that the Met does not have arguable grounds of appeal, dismissing the challenge entirely.

Campaigners at RTS said they are “thrilled” with the outcome, having been critical of the Met for mounting an appeal at all.

Reacting to the news, Mayor of London Sadiq Khan said: “I welcome today’s judgment by the Courts rejecting again the appeal from the Metropolitan Police. As I made clear at the time, the decisions made by the police around the vigil in Sarah Everard’s memory were completely unacceptable, and only further damaged the trust and confidence of Londoners.”

The kidnap and murder of 33-year-old marketing executive Sarah Everard by a serving Met Police officer, Wayne Couzens, sparked a wave of anger and protests about women’s safety.

RTS called a vigil on Clapham Common – one of the last places Ms Everard had been seen alive – for March 13, 2021, and had organised safety marshals and social distancing to guard against the spread of Covid.

However talks with Scotland Yard broke down when the force insisted any event at all would put the organisers at risk of a hefty Fixed Penalty Notice under the government’s pandemic laws.

Deciding that the Met had acted unlawfully, Lord Justice Warby said: “The relevant decisions of the (Met) were to make statements at meetings, in letters, and in a press statement, to the effect that the Covid-19 regulations in force at the time meant that holding the vigil would be unlawful.

“Those statements interfered with the claimants’ rights because each had a ‘chilling effect’ and made at least some causal contribution to the decision to cancel the vigil.

“None of the (force’s) decisions was in accordance with the law; the evidence showed that the (force) failed to perform its legal duty to consider whether the claimants might have a reasonable excuse for holding the gathering, or to conduct the fact-specific proportionality assessment required in order to perform that duty.”

A woman talks to a police officer during a gathering in Clapham Common, London, after the Reclaim These Streets vigil for Sarah Everard was officially cancelled (Victoria Jones/PA)

When mounting the appeal, the Met said: “The reason we’re appealing this case is that we believe there are important points of principle around the role of police in advising organisers ahead of a proposed event and whether that should involve an assessment of the importance of the cause.

“We believe that clarity around these issues is of the utmost importance both for citizens and their right to free expression, and for the police in how they enforce legal restrictions while remaining neutral to the cause behind the event itself.

“This appeal is not about the policing of the vigil itself, but about the decisions and communications with Reclaim These Streets ahead of the planned event last March.

“As an organisation we work with, support and police hundreds of protests and events across London every month and take our responsibilities very seriously. We welcome and fully accept the important principles of scrutiny and challenge into this area of policing.”

In the decision to reject the appeal, Lord Justice Holroyde concluded: “I see no arguable basis on which it can be said that the court’s decision was wrong.

“The court’s evaluation of the evidence involved no error of principle or unsustainable finding.”

In response to the decision, RTS co-founder Jamie Klingler, who brought the judicial review with Jessica Leigh, Anna Birley, and Henna Shah, Tweeted: “It is finally over. Vindication.”