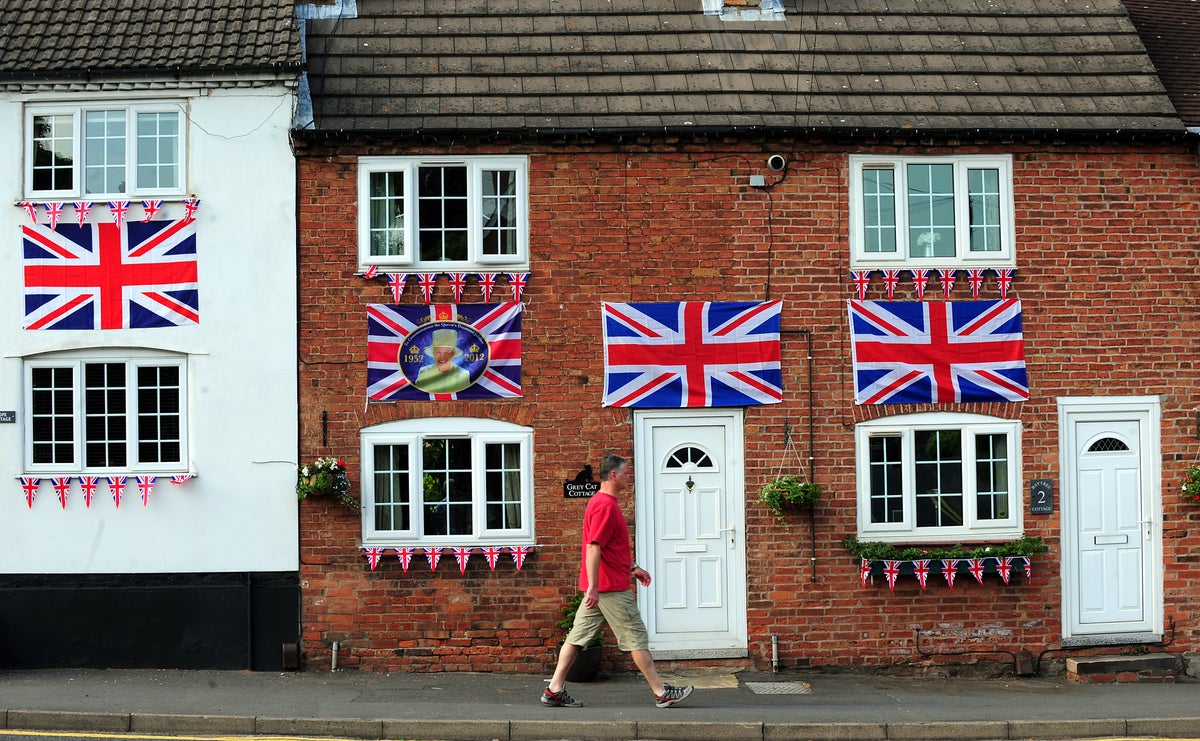 illions of people across the nation will be celebrating the Platinum Jubilee at patriotic street parties while live music, light projections and life-size cut outs of the Queen herald the historic occasion over the next four days.

Events range from family picnics to a record-breaking 5,000-strong street party in the North West, in what the Met Office has said will be a quintessentially British summer bank holiday of drizzle and patchy sunshine.

The largest party celebrating the Queen’s record-breaking 70-year reign is set to be Morecambe Bay’s Big Jubilee Lunch on Sunday, which is hosting around 5,000 people at over 500 tables overlooking the sea.

Official celebrations will begin at 1pm with a Samba dance down the promenade, before Lord Shuttleworth – the Lord Lieutenant of Lancashire – cuts a replica cake of the kind the Queen cut at the G7 Big Lunch at Eden last year.

Mr Trevaskis, who is the chief executive at Morecambe Town Council, told the PA News Agency: “This is going to be the first major event Morecambe has had coming out of lockdown, which was a very, very difficult period of time for so many people.

“It’s going to be an amazing opportunity for communities to come together and celebrate the Queen being on the throne for 70 years, but also to really celebrate what makes Morecambe special.

Decorations including a life-size cut-out of the Queen at a home in Bromley, south London (Athina Georgiou)

Red, white and blue smoke cannons will be released across the bay at 3.30pm to mark the end of the jubilations.

At the opposite end of the country, an LED beacon will be illuminating the south coast from Hove Esplanade in Brighton, East Sussex.

The city’s mayor, Lizzie Deane, said: “The Platinum Jubilee is a historic national occasion and I know many people are looking forward to having a long weekend to spend with friends and family.”

In Croydon, south London, a thanksgiving service will be held at Addiscombe Catholic Church, where diversity will be celebrated in the Queen’s 70th year.

Organiser Sylvia Wachuku-King said prayers will be said in six languages, while Guides are crafting a quilt representing the jubilee.

Meanwhile in nearby Bromley, a committee of seven women have planned a street party for 40 families.

The Kesmire committee of women who have organised a Jubilee street party in Bromley, south London (Athina Georgiou)

Hairdresser Athina Hapeshis, 55, said her street came together as a community during the coronavirus pandemic, and they have decorated 72 trees in the area with  Union Jack colours in preparation for the party.

Mrs Hapeshis, who is a grandmother-to-three and has a life-size cut out of the Queen in her home overlooking the street festivities, said residents can expect cakes, a live DJ and games for the children.

She told PA: “I remember the Queen’s Silver Jubilee, and I wanted to make sure my grandchildren and all the children around here have something to remember.”

When asked what the monarchy meant to her community, she said: “Because it’s such a mix of age groups, everyone will have their own view, but it’s definitely brought the community together.

“The fact the Queen has been serving so many years and she’s a woman – the children have been learning a lot about it at school.

“We’re just waiting for the weather to say ‘yes, it’s going to be amazing’.”

The Met Office has said northern areas can expect a cool and showery start to the bank holiday on Thursday, before temperatures pick up on Friday, which is set to be the warmest day of the weekend.

Temperatures are set to soar to 26C in the south on Friday, while north-west Scotland is expected to be the warmest on Sunday.

An estimated 10 million people plan to celebrate the Queen’s Platinum Jubilee, according to the Department for Digital, Culture, Media and Sport (DCMS).

The Department also said that more than 70,000 ‘Big Jubilee Lunches’ and 200,000 more local events have been planned across the four nations.

Many official events will also be collecting money for charities throughout the bank holiday.

Across the Commonwealth and the rest of the world, more than 600 Big Jubilee Lunches are planned in around 80 countries – from Greenland to New Zealand.