With the game deadlocked in a scoreless tie after seven innings, Yankees manager Aaron Boone was put in a tight spot: should he let his locked-in starting pitcher, Nestor Cortes Jr., go back out to the mound despite a climbing pitch count? Or go to the bullpen to spare his unheralded ace?

Boone went with Option A. And though Cortes lost the no-hit bid two hitters later, the Yankees eventually gutted out a 1–0 win over the Rangers, and Cortes said he felt plenty strong enough to stay in the game that late. Until, that is, the game had ended.

“Body felt good, obviously when the emotions and the adrenaline is rushing, everything feels great,” Cortes said afterward. “But now, I feel like I got hit by a truck.” 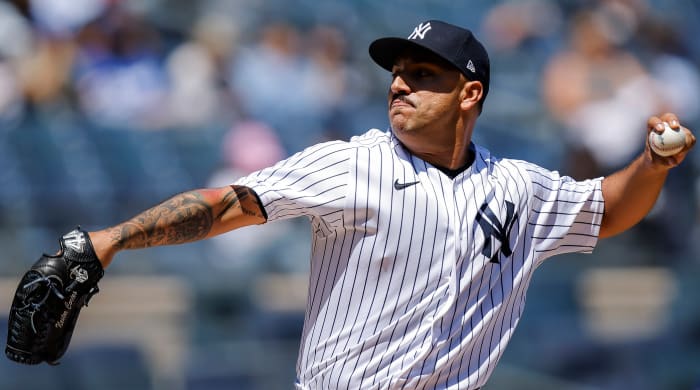 Who needs overpowering stuff when you’ve got a magnificent mustache?

This is the second time in this still-young season that we’ve seen a manager face with such a decision. Last month, Dodgers manager Dave Roberts opted to pull Clayton Kershaw after the future Hall of Famer had fired seven perfect innings. Kershaw said afterward that Roberts made the right call, which probably is true, even if it was unpopular.

In the case of Cortes, leaving him in the game was both the correct baseball move and the more entertaining one. Boone’s verdict differed from that of Roberts not only because of the outcome, but because of the pitcher at the center of it.

A 36th-round draft pick isn’t supposed to take a no-hitter into the eighth inning, particularly not after getting released, traded and left unprotected in the Rule 5 draft by the time he turned 25 years old. But from his pitching repertoire to his sweet ‘stache, nothing about Cortes is typical. And Monday’s outing was just the latest high point in what’s becoming one of the most remarkable breakouts of the 2022 season.

Incredibly, Cortes, 27, is in his third stint with the Yankees. New York drafted him with the 1,094th overall pick in 2013, then stashed him in the minor leagues for five seasons before leaving him unprotected in the ’17 Rule 5 draft. The Orioles picked him up, and he broke camp with the team as a reliever before being designated for assignment shortly after Opening Day.

The Yankees eventually parted ways with him again, trading him to Seattle in 2019, but he returned to New York on a minor league deal in December ’20. It was last season that he finally found his footing in the big leagues, and the deceptive lefthander has ascended to new heights through his first six starts of ’22.

Monday’s start was the perfect showcase for how and why Cortes is able to be so effective with stuff that’s far from overpowering. Leaning on a cut-fastball that topped out at 87.7 miles per hour, Cortes left Texas hitters baffled all afternoon. He induced 17 swings-and-misses on the day—12 on the cutter alone. Of the 12 balls put in play against him, eight had exit velocities under 90 mph. He changed speeds, altered his arm angles and generally made life miserable for the opposition, racking up 11 strikeouts and pitching into the eighth inning for the first time in his career.

Cortes’s development into a frontline starter is a boon for a Yankees pitching staff overloaded with talent. He owns a 2.52 ERA across 125 innings dating back to last season, with 145 strikeouts in the process. Gerrit Cole is the biggest name in the rotation, and the bullpen has the best ERA (2.31) in the majors, but it’s the mustachioed soft-tosser who has stood out among the rest of the pack to this point.

Cortes might not have been tabbed as an ace at any point along his roundabout path to the major leagues. But after his team let him walk away twice before, Boone and the rest of the Yankees are simply happy to see him in pinstripes now.

“A lot of folks missed out,” Boone said after the game. “Just glad we got him.” 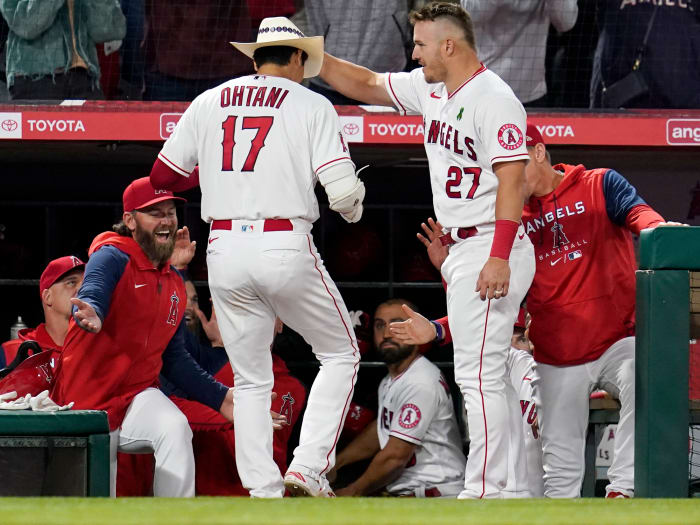 Mike Trout bestows the Angels home run cowboy hat upon Shohei Ohtani, who followed up Trout’s homer with one of his own. It was the first of Ohtani’s two dingers Monday night.

• For the first time in his professional career—in MLB or in Japan—Shohei Ohtani hit a grand slam. The blast came in the bottom of the seventh of the Angels’ 11–3 win over the Rays, one inning after Ohtani and Trout went back-to-back to break the game open. The reigning MVP has dazzled on the mound this year, but until recently, his bat has been mostly quiet. A breakout feels imminent.

• Goodness, what a collapse by the White Sox. They led by six runs in the top of the ninth inning before completely falling apart. Chicago officially squandered the lead after closer Liam Hendriks gave up a two-out, game-tying grand slam to Guardians first baseman Josh Naylor. Naylor delivered the knockout punch two innings later with a three-run blast in the 11th that proved to be the difference in the 12–9 Cleveland win.

• The Dodgers lost—and gave up 15 hits—to the … Pirates? Baseball’s best team, which came into the game with an MLB-leading 2.07 ERA, fell to a Pittsburgh squad that’s been a bit feistier than anticipated to start the season. It’s early May, and this result will be long forgotten by October (and likely well before that, if we’re being honest). But on a night when the streaking Brewers also lost to the inept Reds, it just goes to show that you can’t predict ball.

More MLB Coverage:
• The Pitching Coach Behind the Diamondbacks’ Revival
• MLB Power Rankings: These Breakouts and Busts Are Shaking Things Up
• The Day ‘Shotime’ Came to Fenway Park
• Five-Tool Newsletter: Christian Yelich Is Back in MVP Form
• How Concerned Should We Be About These Five Sluggish Starts?