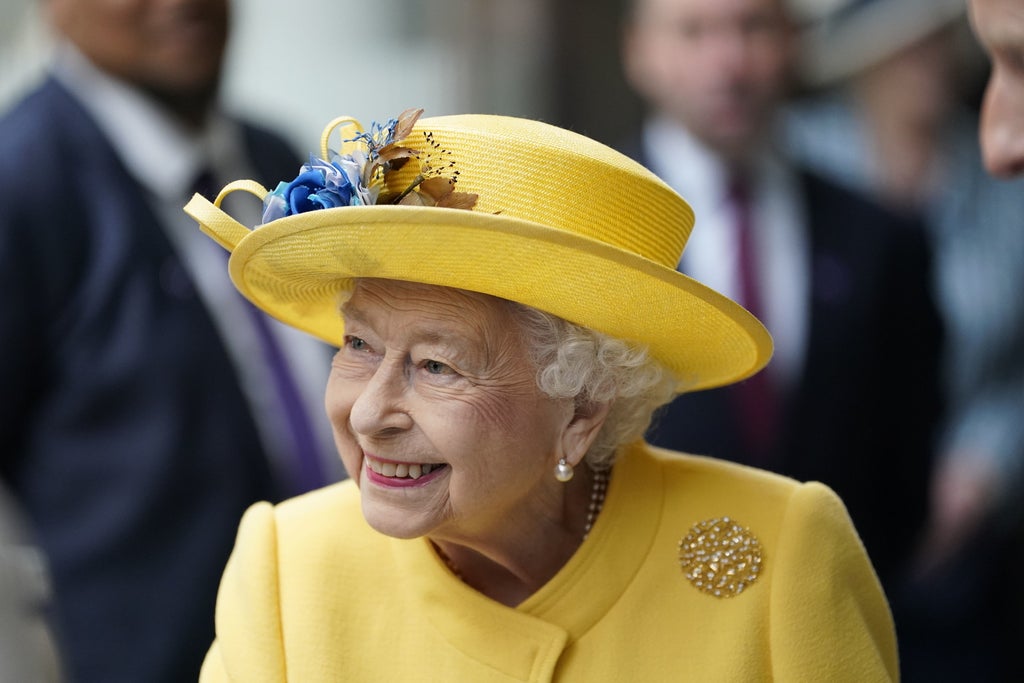 Her Majesty visited Paddington station on Tuesday morning to mark the completion of the £20 billion rail link, which will transform cross-London travel.

Transport for London commissioner Andy Byford told the Standard afterwards: “She was amazed. She looked around. She said to me: ‘It looks spectacular.’ She really was impressed.”

The 96-year-old monarch, who now rarely carries out public engagements outside of her royal residences, joined her youngest son the Earl of Wessex for the official visit.

Dressed in sunshine yellow, the Queen arrived at 11.32am, stepping carefully from the transparent lift while holding a walking stick.

A Buckingham Palace spokeswoman said: “In a happy development, Her Majesty The Queen is attending today’s event to mark the completion of the Elizabeth line.

“Her Majesty was aware of the engagement and the organisers were informed of the possibility she may attend.”

Earlier, Boris Johnson said: “I’m sure all of us agree that in this unique Jubilee year there is no figure who more deserves the honour of having this wonderful new line named after them.”

Passenger services are set to start on the line next Tuesday.

The Queen, 96, “reluctantly” decided not to attend the State Opening of Parliament last Tuesday after consultation with her doctors, Buckingham Palace explained, as she “continues to experience episodic mobility problems”.

She went to the Royal Windsor Horse Show on Friday and on Tuesday met some of the staff who built the Elizabeth line, known during construction as Crossrail, and unveiled a plaque. Mr Johnson hailed the line as a “vast new artery” to pump more life through London.

The Prime Minister added that it was a “great feat” of engineering to “carve the future” for the capital as it shrugs off the Covid-19 pandemic to embark on a new era.

But he also emphasised it would benefit the wider UK economy by driving growth and investment. As London’s public transport network is being expanded, Mr Johnson added: “This vast circulatory system. Bringing life to the limbs of the city and allowing the heart to expand and contract each day as millions surge towards the centre and then home again. It’s always under pressure…But today it has a vast new artery. The Elizabeth line shows the world that when we put our minds to it, when we put our shoulders to the wheel, we can still achieve great feats in this country.

“We can get the big jobs done. We can carve the future from the very bedrock.”

With the Government pushing its levelling-up agenda, he added: “It won’t just be London and the South-East that benefits but the whole of the UK because better transport means a growing economy.”

The Tube map has already been redrawn, with the new link shown as a white line with a purple border. It is not technically part of the London Underground, but there will be interchanges with the Tube or DLR at nine of the 10 new stations.

Mayor Sadiq Khan said: “The opening of the Elizabeth line, with nearly 70 per cent of the total funding paid for by London, is a landmark moment for our capital and our whole country, particularly in this special platinum jubilee year.

“The Elizabeth line is the most significant addition to our transport network in decades and this new line will revolutionise travel across the capital and the South-East and bring economic benefits to the whole country. There is now just one week to go until our world-class new railway will be open to passengers, and I can’t wait for everyone to experience it.”

Tuesday’s royal event comes more than three and a half years after the Queen was originally meant to open Crossrail, on December 9, 2018. It was named the Elizabeth line in her honour in February 2016, when she visited Bond Street station.

The royal party was today meeting Crossrail workers and apprentices, drivers and station staff who will operate the Elizabeth line. The Earl of Wessex “touched in” on his way to the platforms using a commemorative Elizabeth line Oyster card.

Mr Byford said: “Everyone at TfL is committed to ensuring this new railway will serve as a fitting tribute [to the Queen] and will — by creating faster journeys, new jobs, and economic growth — become a vital part of London’s recovery.”

Crossrail has been delayed by construction problems — Bond Street station is still not finished and trains will not stop there until later this year — and the difficulty of integrating the train software with the digital signalling system. The project’s costs have increased by £4 billion to £20 billion.

The new central section, which runs in twin tunnels between Paddington and Abbey Wood, will initially operate separately to its western and eastern branches, with passengers changing at Liverpool Street or Paddington.