Rankings go up on Mondays. 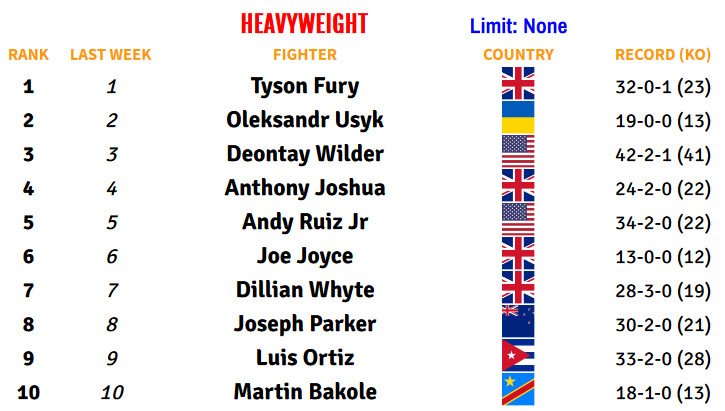 Notes: Should have mentioned it last week, but just sort of forgot by the time rankings rolled around. Tyson Fury probably isn’t going anywhere any time soon despite his “retirement,” as the WBC are giving him plenty of time to consider his future, which means for the foreseeable future he will be the WBC heavyweight titleholder. Something could change with the WBC’s outlook on the matter or Fury could just go “please take this belt back and let others fight for it,” but I doubt the latter happens. Fury has no reason to act before they do. 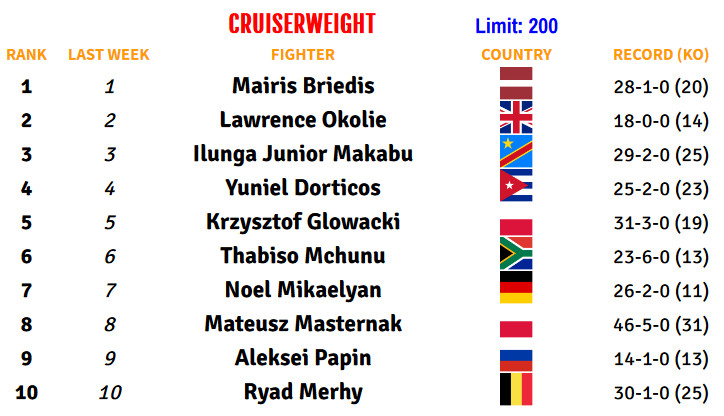 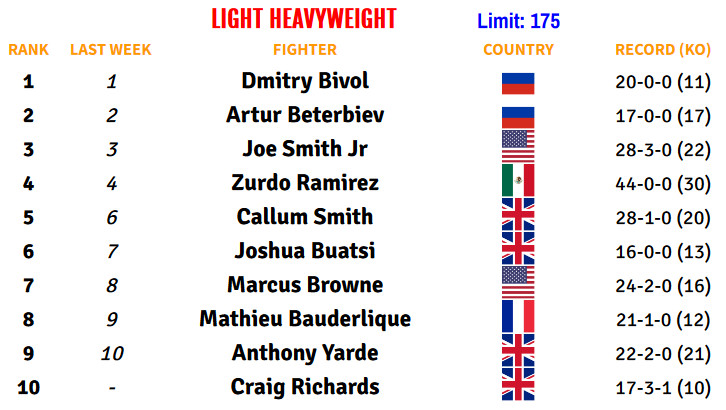 Notes: A little shakeup here, as Maxim Vlasov, last week’s No. 5, was upset in Russia against Dilmurod Satybaldiev last Friday, a TKO-6 loss. It was a catchweight bout between 175 and cruiser, but obviously he meant to still fight at 175; Vlasov tried full cruiser before and the results were iffy, and he came back down. This was meant as sort of a stay-busy but it just went all wrong.

Craig Richards is in. I know he just lost to Joshua Buatsi, but he was very competitive and this division is not bursting with obvious top 10 cases; everyone after No. 6 has questions. 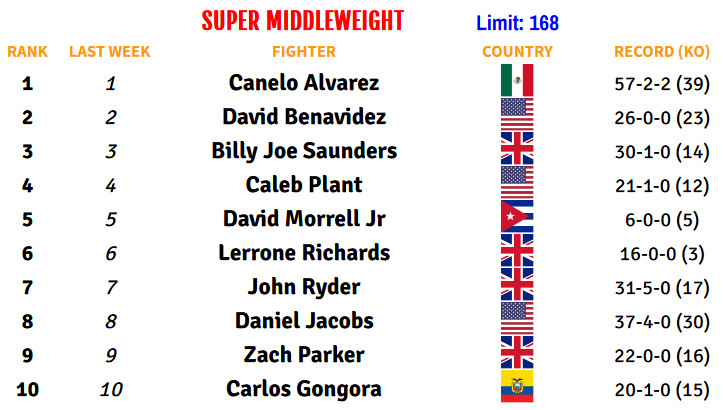 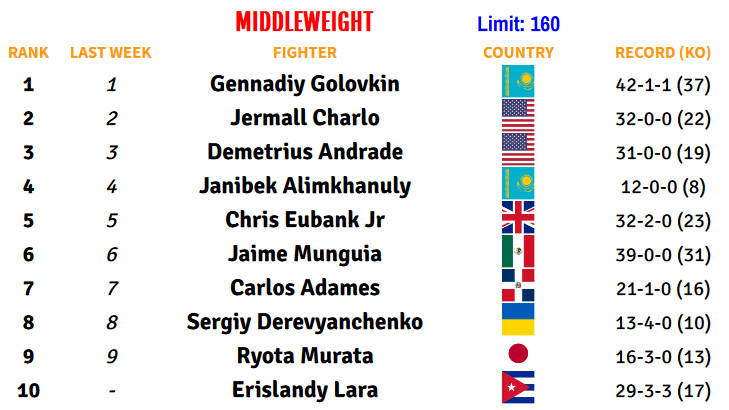 Notes: Erislandy Lara is in, replacing Felix Cash. Lara’s two fights at 160 have not been against top opposition, couple of fellas named Cornflake and Spike who were both way over-matched, but I think Lara deserves full career and eye test credit over Felix Cash, the prior No. 10, at least for now. Cash struggled in his last fight and Lara, while past his prime, can still fight. If Lara fought Cash, Lara would be the favorite.

I’m not sure there are any better arguments for the spot, either. Michael Zerafa, Maciej Sulecki, Meiirim Nursultanov, Liam Williams — I think Lara deserves the nod right now. I’m hoping he gets a better fight next. I’d love to see him go to Japan and fight Ryota Murata, or fight Carlos Adames or Sergiy Derevyanchenko in the States. There are good fights to be made. 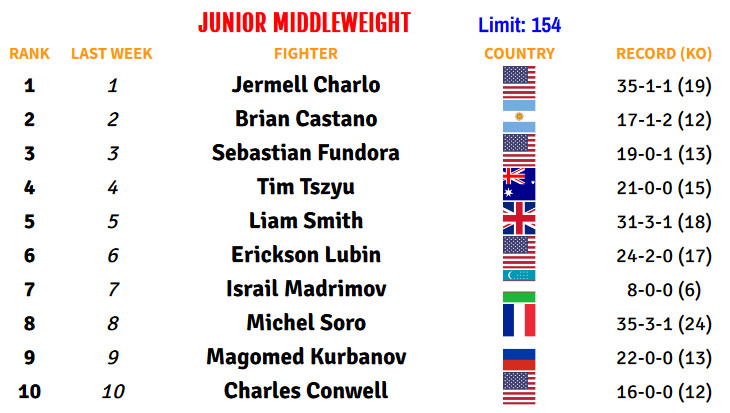 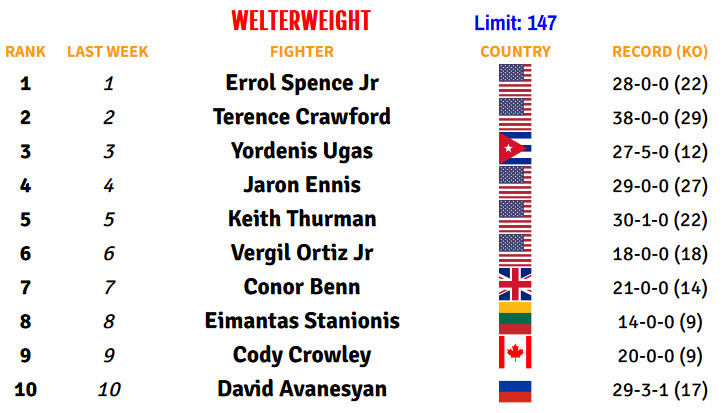 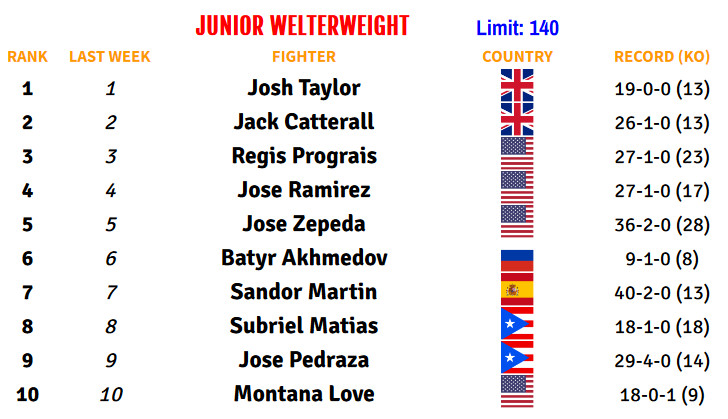 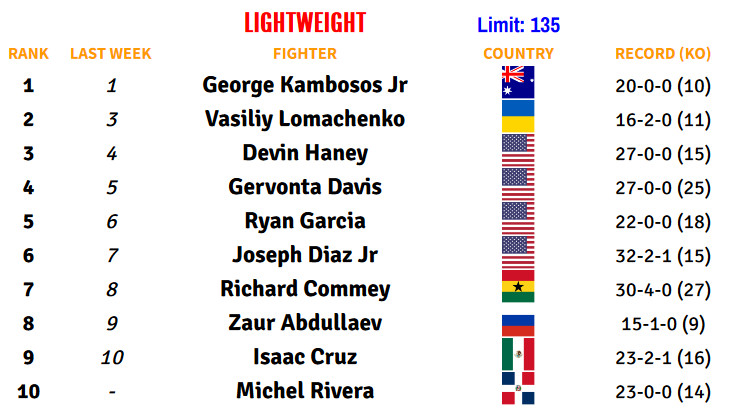 Notes: The big note first, Teofimo Lopez is out of the rankings. It’s nothing against Teofimo, he was just eating up a spot here and it’s now very clear he will not be fighting at 135 again, with his move to 140 planned for August. I went with Michel Rivera; others have about a similar case.

Gervonta Davis’ win over Rolando Romero had a violent finish, which most expected — both the win and the violent finish. I think two things are clear with Tank at 135:

To me it’s sort of like Canelo at 168; I’m not comparing Tank’s achievements to Canelo’s yet, but it’s obvious Davis is small and pushing it at this weight, let alone 140 which he tried out against Mario Barrios. He says he’s comfortable at 135, but while he gets dunked on sometimes by other fighters for getting “fat” between fights, when he hits the scales and is in the ring, he is a thin guy with a thin build for this weight. He’s not like Isaac Cruz, who is even shorter but is just built like a little bruiser, has that thick body.

Davis proved nothing new against Romero, really; he was a heavy favorite until the genius sharps made him only a pretty heavy favorite with a lot of late money they lost on Romero’s trash talk and whatever insider chatter they were following. And he won’t get chances to prove anything new unless he leaves Mayweather Promotions and maybe even PBC. But that’s for the future. 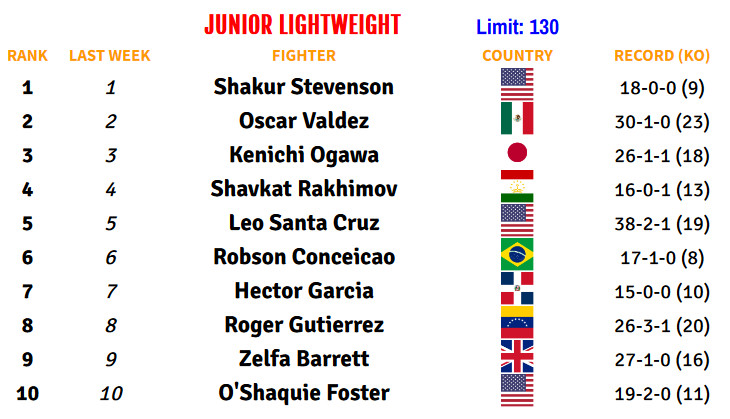 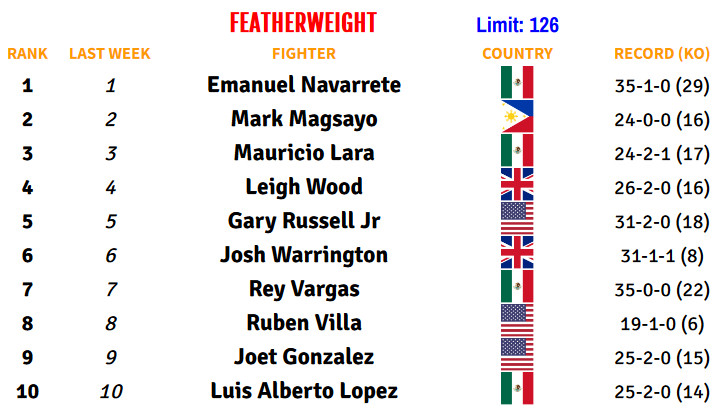 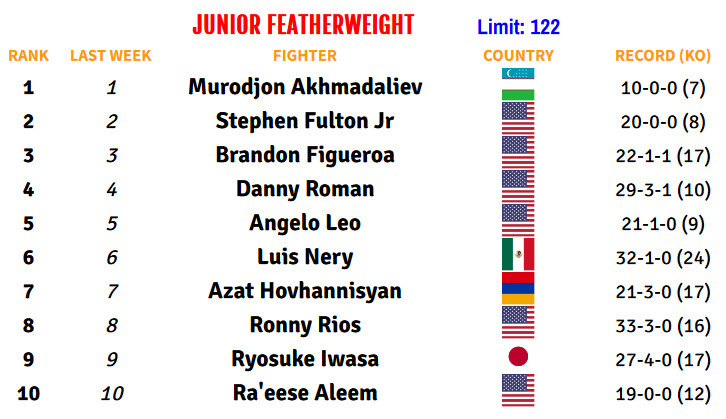 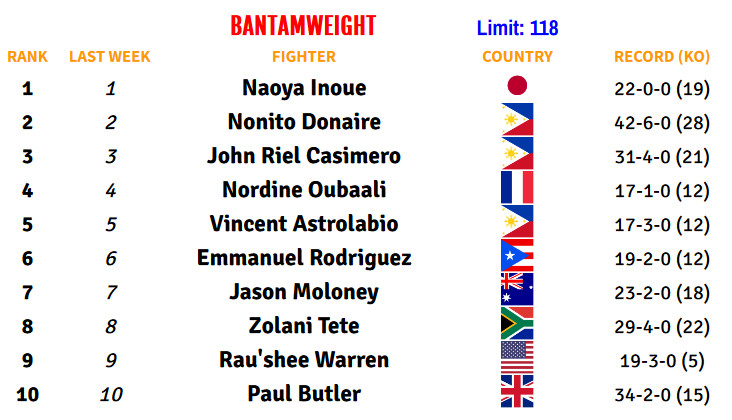 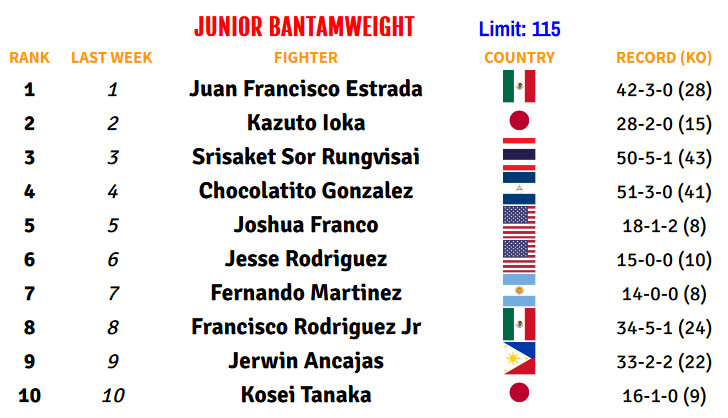 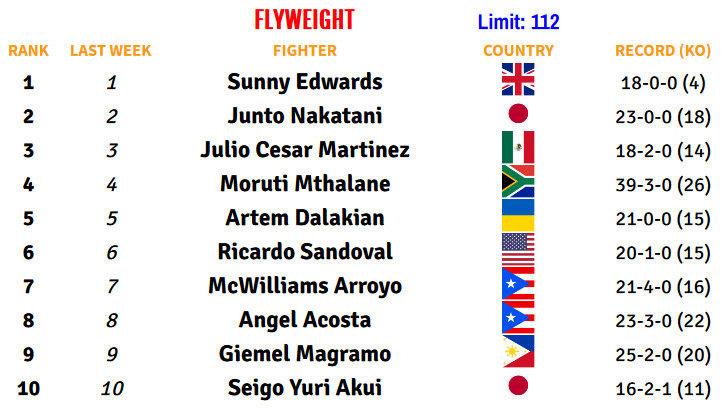 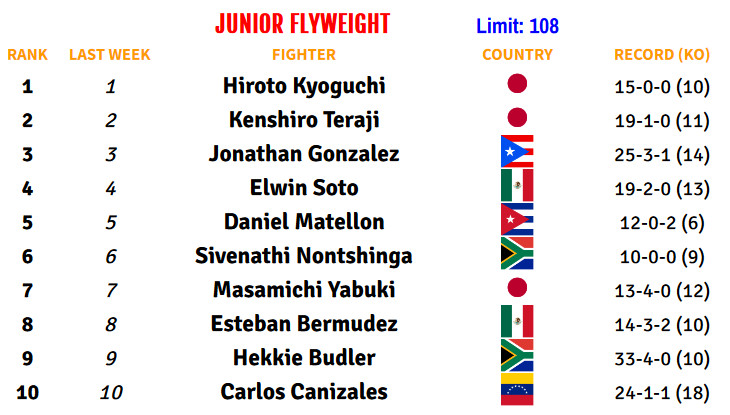 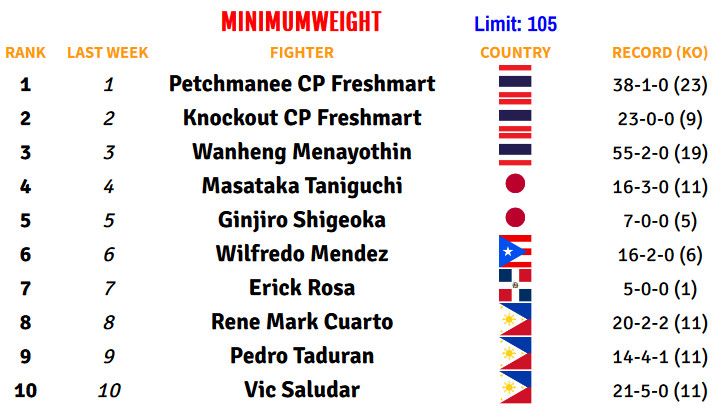 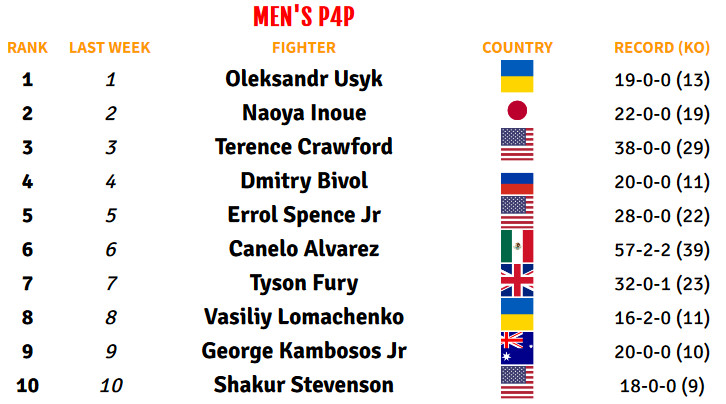 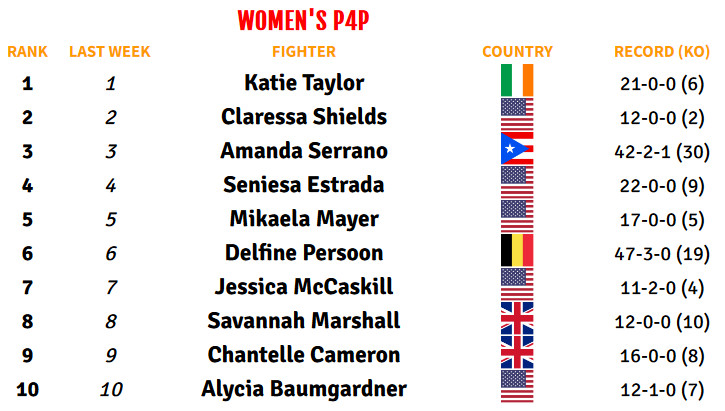 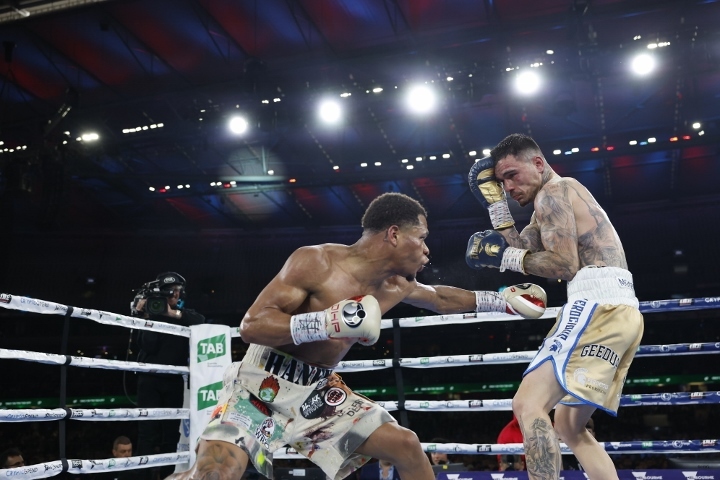 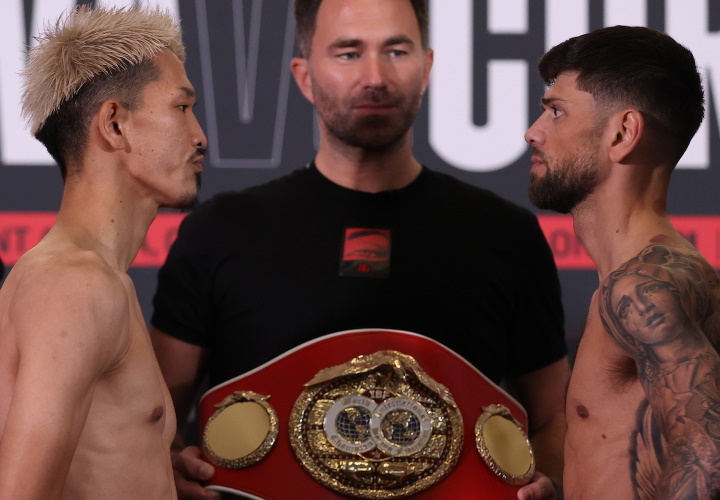 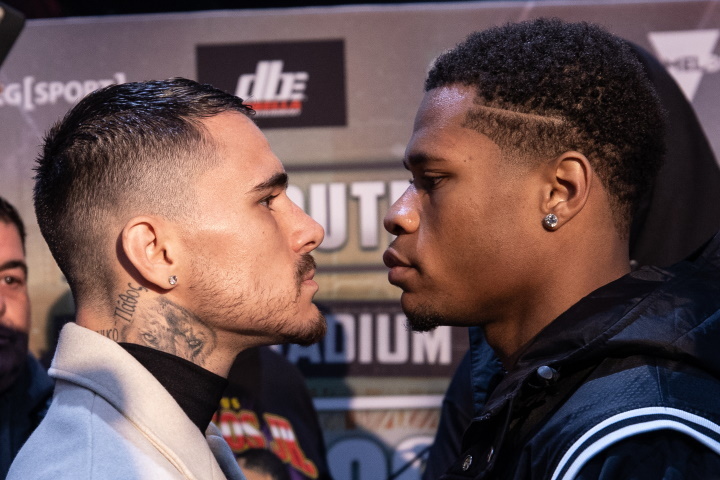