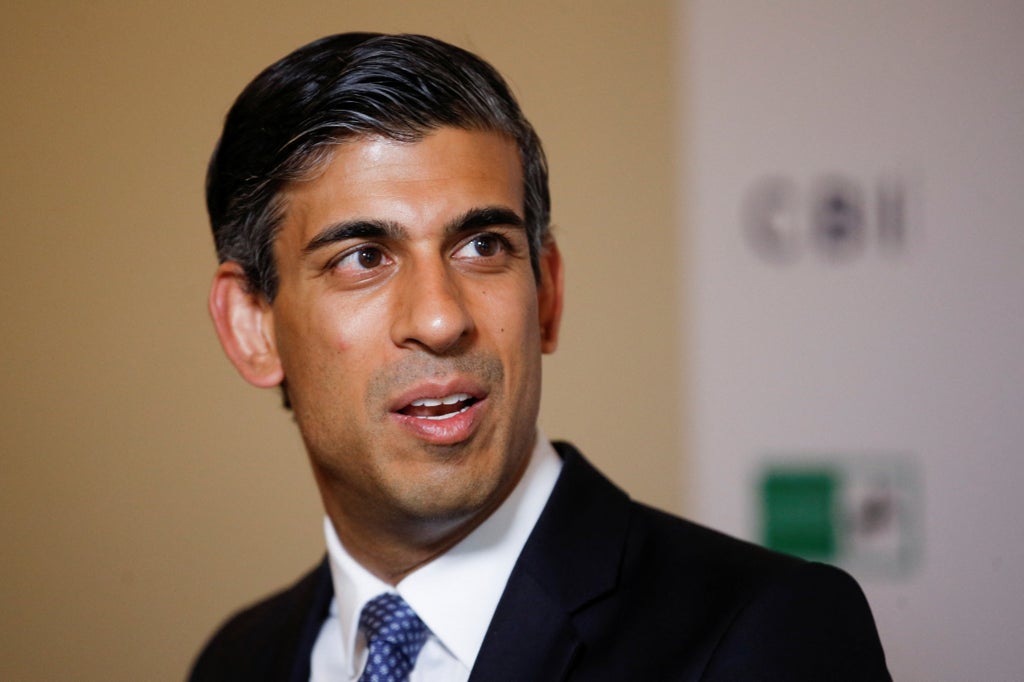 ishi Sunak has warned the “next few months will be tough” as families face the cost of living crisis.

Soaring energy bills have pushed the Consumer Prices Index — the headline measure of inflation — to nine per cent in April, a level not seen since 1982.

In a speech at a Confederation of British Industry dinner on Wednesday evening the chancellor said he “cannot pretend” it will be easy to cut the cost of living for families amid a “perfect storm of global supply shocks.”

“There is no measure any government could take, no law we could pass, that can make these global forces disappear overnight,” he said.

“Our role in Government is to cut costs for families. I cannot pretend this will be easy. The next few months will be tough. But where we can act, we will.”

Mr Sunak added that “as the situation evolves our response will evolve” and “we stand ready to do more”.

However he stopped short of announcing any immediate measures. Mr Sunak has previously said he wants to wait to see the extent of a further rise in regulated domestic power tariffs in the autumn before deciding on how much more support households need.

He called on businesses to boost investment and training in order to grow the economy and help ease the cost of living crisis, pledging to cut taxes on firms in return.

He told firms “we are on your side” adding: “We need you to invest more, train more, and innovate more.”

“In the autumn Budget we will cut your taxes to encourage you to do all those things,” he said.

“That is the path to higher productivity, higher living standards, and a more prosperous and secure future.”

It comes as families left reeling from the highest rate of inflation in 40 years were on Wednesday warned that the cost of living crisis will only get worse.

The jump from seven per cent in March was as much in a single month as the Bank of England’s inflation target for an entire year. It came as petrol prices on Wednesday hit a new all-time high and City experts cautioned that supermarket and energy bills — as well as the cost of mortgages — will continue to go up.

The last time inflation was this high, Margaret Thatcher was in No 10 and Britain had despatched a naval taskforce to take back the Falkland Islands.

The new peak will pile pressure on Boris Johnson and Chancellor Rishi Sunak to announce extra measures to help families ride out the inflationary storm.

The squeeze on spending also raises the risk of a recession later this year, and interest rates are likely to go up again next month.

On Wednesday, Foreign Secretary Liz Truss said Mr Sunak was “urgently” looking at what more he could do to help.

The main culprit for the April rise was the 54 per cent jump in the cap on gas and electricity bills at the start of the month caused by a spike in wholesale energy prices. Russia’s invasion of Ukraine has triggered turmoil in global energy and food markets.

The Office for National Statistics said a range of daily essentials are surging in cost. Food prices went up 6.7 per cent, the fastest since June 2011, while transport costs rose a record 13.7 per cent.

The RAC said the price of petrol reached a new peak of 167.64p a litre yesterday, wiping out the effect of Mr Sunak’s 5p a litre cut in duty announced in his Spring Statement.

The CPI rise had been expected in the City and the reaction in financial markets was relatively muted. It is expected to plateau over the summer before another peak in October when the energy cap is expected to rise again by at least another £500 a year.

The Bank of England has forecast that inflation could pass 10 per cent at that point.

Paul Johnson, director of the Institute for Fiscal Studies, tweeted: “Our analysis suggests that the poorest are facing an inflation rate or around 11 per cent. That’s because they spend a large fraction of their budget on energy and food. Their benefits of course rose by just 3.1.”

Forecasters said there would be little respite for families this year. Thomas Pugh, economist at RSM UK, said: “Food price inflation will continue to rise over the rest of the year, potentially hitting 10 per cent, and petrol prices have not fallen, despite drops in global oil prices.

Ms Truss told Sky News: “I know the Chancellor is looking at further measures we can take. We completely understand it’s a difficult situation for people across the country.”

Mr Sunak is reportedly preparing to unveil new support measures, perhaps including help with energy bills through the warm homes discount in July followed by possible tax cuts later in the year. The Treasury said he stood ready to do more, but officials dismissed the latest reports as speculation.

Pressure is also growing on Mr Sunak to introduce a windfall tax on energy giants to fund further support for those struggling to pay their bills.

Tory MPs on Tuesday voted down a Labour motion calling for a windfall tax during a debate on the Queen’s Speech.

Asked about a windfall tax, Ms Truss said she was a “low tax Conservative” and wanted to see energy companies investing more into new operations.

As Labour talbed a motion on an emergency budget on Wednesday, deputy leader Angela Rayner tweeted: “Boris Johnson’s Conservatives are failing to tackle the cost of living crisis. We’re calling for an emergency budget now — and real action to grow our at-risk economy.”

Despite calls from the Prime Minister’s own backbenchers for the Government to change course, Labour’s amendment calling for an emergency budget was defeated by 312 votes to 229, majority 83, while Liberal Democrat and SNP proposals were also rejected.

Conservative former cabinet minister Chris Grayling told the debate: “I am pretty supportive of much of what this Government has done, how it has gone about dealing with a range of issues that have arisen.

“But I would like to make one very simple point to the minister and his colleagues. You cannot achieve growth by over-taxing our economy.

Conservative Sir Bernard Jenkin, MP for Harwich and North Essex, said a £13.5 billion ‘summer package’ of support is required, telling MPs: “We must all recognise the cost-of-living crisis – yes crisis.”

Sir Bernard added: “Like after the unforeseen Covid crisis, the Treasury must adapt to this unexpected war in Europe and accept this new global energy and economic crisis also requires a very substantial policy response.”

He suggested the £20 uplift in Universal Credit “should immediately be restored”, adding: “The abolition of VAT on domestic fuel would abolish a regressive tax which actually hurts the poorest households the most, we can do this now we’re outside the EU.”