Good morning, I’m Dan Gartland. Aaron Judge is the only MLB free agent I care about, but let’s take a look at some others.

🚗 An auto race from New York to Paris

If you’re reading this on SI.com, you can sign up to get this free newsletter in your inbox each weekday at SI.com/newsletters.

As of 5 p.m. ET yesterday, MLB free agents are free to sign. While baseball doesn’t usually have the immediate flurry of transactions that the NBA does, it’ll be interesting to see how quickly teams sign players after the lockout snarled last offseason’s free-agency process.

Before we look at the available players and where they might sign, let’s get a couple of big-picture things out of the way. One challenge facing general managers this offseason is how to weigh the impact of upcoming rule changes when signing players. (Emma Baccellieri wrote about this yesterday.)

The other thing to know is that the qualifying offer system remains in place after the MLBPA rejected the league’s proposal for an international draft. Teams that extend a qualifying offer to a player (one year, $19.65 million this year) are entitled to draft pick compensation if that player rejects the offer and signs elsewhere. Teams signing players who rejected the offer are forced to give up a draft pick. The union wanted to scrap the qualifying offer system because the draft penalties discourage teams from signing players but couldn’t get the league to budge in collective bargaining.

There were 14 players who were extended qualifying offers before the deadline yesterday. That list is usually a good starting point if you’re trying to figure out who the top free-agent targets are in a given year.

One of those players is Aaron Judge. He’s the top player on the market this winter after his record-setting 2022 season. His decision could hold up the market as potential suitors wait to sign other players before learning whether they’ve won the Judge sweepstakes. But there are plenty of other top players available, including …

A whole bunch of shortstops

Judge takes the top spot in Will Laws and Nick Selbe’s ranking of the top 50 free agents, but the next four guys on the list are all shortstops: Trea Turner, Carlos Correa, Dansby Swanson and Xander Bogaerts. I’m especially interested to see where Correa signs and for how much. He bet on himself by signing a three-year deal with multiple opt-outs with the Twins. He opted out after making $35.1 million this season. He’ll be hoping to get a long-term deal this time around, and, after another strong season at the plate, he should get it. He knows it, too.

​​“When I go to the mall and I go to the Dior store, and I want something, I get it,” Correa told reporters in September. “I ask how much it costs, and I buy it. So, if you really want something, you just go get it. So, yeah, I’m the product here. If they want my product, they’ve just got to come get it.”

Judge isn’t the only superstar who could be leaving New York. The Mets’ efforts to pair deGrom with Max Scherzer to form an unstoppable starting rotation didn’t exactly go according to plan as deGrom missed significant time with a stress reaction in his pitching shoulder. Health is always a concern for starting pitchers but especially so with deGrom, who hasn’t pitched a full season since 2019 and will turn 35 in June. As with Judge and the Yankees, losing deGrom would be a PR nightmare for the Mets. Laws and Selbe predict he’ll stay in New York, but the New York Post’s Jon Heyman reports that deGrom has also told the Rangers that he’s interested in signing with them.

Clayton Kershaw is reportedly nearing a return to the Dodgers, which takes one top arm off the market, but there are others who will command top dollar. In the short term, the next best after deGrom has to be Justin Verlander. He’ll be 40 when next season begins, but he just posted the best ERA of his career. Carlos Rodón will probably make the most money of any starter this winter. He turns 30 next month and has put together back-to-back excellent seasons after struggling to find his footing with the White Sox. Other quality starters available include Nathan Eovaldi, Chris Bassitt, Tyler Anderson and Kyle Gibson.

Some other notable names

You can see the full list of every free agent here, but I’ll highlight a few names that stuck out to me:

Willson Contreras: He’s the best catcher available, and, as Laws and Selbe point out, a good enough hitter to stick as a DH once he can’t get behind the plate anymore. José Abreu: The former AL MVP is as good as any hitter in the majors. Joey Gallo: He might be happier than anybody that the infield shift is being outlawed. Brandon Nimmo: He’s far and away the best center fielder available this year.Kevin Kiermaier: If you want a glove-first center fielder, though, Kiermaier is among the best in baseball.

The best of Sports Illustrated

In today’s Daily Cover, Jon Wertheim writes that Robert Griffin III has all the makings of a TV star, even if he still believes he can play in the NFL:

Griffin marries substance with style and preparation with whimsy. He does what all the great analysts do and transports the viewers onto the field and into the huddle. He avoids the great athlete-turned-analyst pitfall of I-remember-from-back-when-I-was-playing tropes that are as boring as they are narcissistic. All the while, RGIII has nailed that [Charles] Barkley-esque sweet spot for delivering unfiltered truth, without polarizing or drawing offense from the audience.

Albert Breer spoke with NFL executives to get their picks for midseason awards. … Jonathan Wilson has a power ranking of every team in the World Cup field. … Here are our picks for the weekend’s college football games. … Jimmy Traina wonders whether viewers are getting tired of ESPN’s ManningCast. … These are the matchups, spreads and odds for SI Sportsbook’s Perfect 10 contest for Week 10.

Around the sports world

The Washington, D.C., attorney general has filed a lawsuit against the Commanders over the franchise’s toxic workplace scandal. … Two Commanders players spoke out about the team’s invoking the shooting of Brian Robinson Jr. in a statement about the attorney general. … The USWNT lost a friendly to Germany, marking the first time it’s lost three in a row since 1993. … Adam Silver spoke to The New York Times about his meeting with Kyrie Irving. … LeBron James weighed in on Irving’s punishment from the Nets.

3. Marcus Mariota’s inexplicable pass that, fortunately for him, did not count.

2. This bizarre play in the G League.

On this day in 1997, the NHL’s expansion franchise in Columbus announced that it would be called the Blue Jackets. What was the other finalist for the team’s name?

Yesterday’s SIQ: Which player has accumulated the most rushing yards in the history of the Falcons-Panthers rivalry?

You don’t see guys have careers like Turner’s much anymore. Serving as LaDainian Tomlinson’s backup for the Chargers, Turner saw limited action in his first four NFL seasons. But when Tomlinson was injured during the 2007 playoffs, Turner stepped up. He ran 17 times for 71 yards against the Colts in the divisional round and 17 times for 65 yards in a loss to the undefeated Patriots in the AFC championship game.

The following offseason, the Falcons signed him to a six-year, $34.5 million contract to make him their top back. After carrying 228 times in four years in San Diego, Turner logged a league-high 376 rushes in his first season with the Falcons. He finished with 1,699 rushing yards, just behind league leader Adrian Peterson’s 1,760, and finished tied for second in MVP voting. Not bad for a guy drafted in the fifth round out of Northern Illinois. 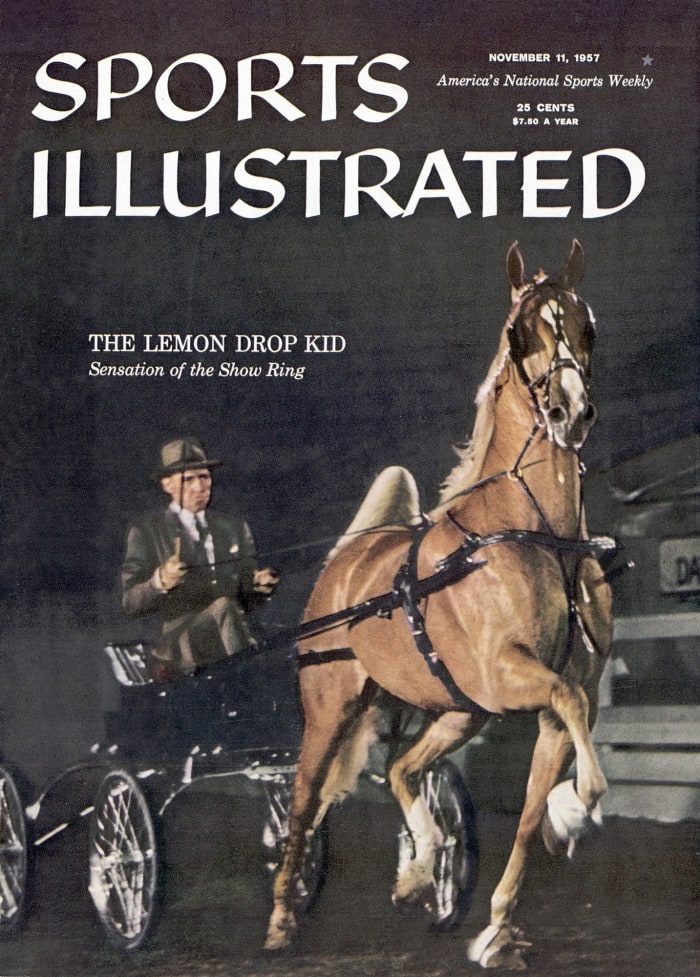 The deeper you scroll back through SI’s archives, the more likely you are to come across something truly off the wall. In this case, I’m not talking about the Nov. 11, 1957, cover story about The Lemon Drop Kid, a once-overlooked racehorse. I’m talking about a mere 600-word article headlined “The Great Road Test.”

The story details a 1908 auto race from New York to Paris. I know what you’re thinking: There’s an awful lot of water between New York and Paris. But the cars didn’t go east. They went west. Here’s how John Durant described the plan:

The betting was even money that not one car would reach Paris, for the automobile was still a novelty and had yet to be tested under the severe conditions that lay ahead. The plan of the race called for the crossing of the continent to San Francisco, whence cars would be shipped via Seattle to Valdez, Alaska; then motoring to Nome by road and getting across the Bering Strait by any means (possibly on the ice) to Siberia; and thence proceeding to Moscow, Berlin and Paris—a total of some 14,000 miles over unpaved roads.

The cars started in Times Square on Feb. 12, heading north up Broadway. One of them, a French Sizaire-Naudin with a 15-horsepower engine (equivalent to today’s riding mowers) didn’t make it past upstate New York. The leader reached the town of Hudson, N.Y., by the end of the first day. Today, that’s about a two-hour drive.

The planned trip across Alaska and over the Bering Strait never materialized due to poor conditions in Alaska. Instead, the competitors put their cars on ships headed across the Pacific to Japan, drove from the east of the country to the west and had the cars shipped to Vladivostok, Siberia, to begin the long trek across Asia toward Paris. At a time before highways, it was a harrowing journey:

The incredible thing is that any car made it, for they had to wander across hundreds of miles of roadless country, bore through vast swamps far worse than the gumbo of Iowa and even take to the tracks of the Trans-Siberian Railway. Once, on a 420-mile leg on the tracks, [American driver George] Schuster drove into a tunnel, heard a train approaching from the other end and backed out into the clear and over an embankment just in time.

Schuster was the first to reach Paris, on July 30, 169 days after the race began.

Check out more of SI’s archives and historic images at vault.si.com.

Sports Illustrated may receive compensation for some links to products and services on this website.

Yankees Have Offered Aaron Judge Deal Worth About $300 Million, per Report