Good morning, I’m Dan Gartland. I was going to lead with a look back at all of last night’s big Game 5s, but then Reid Detmers did this.

🙅‍♂️ A no-no for a top prospect

Plenty of pitchers have flirted with no-hitters this season (Justin Verlander took a no-no into the eighth inning last night and Nestor Cortes Jr. did the same Monday), but no one this season had been able to do what Angels rookie Reid Detmers did last night against the Rays.

Detmers became the first pitcher this year to throw a solo no-hitter. It’s the second no-hitter of the season, following the Mets’ five-pitcher combined effort April 29, and the 12th in Angels franchise history.

Detmers was in disbelief after the game.

“It’s just something I’ve dreamed of ever since I was a little kid,” he said. “I didn’t think it’d ever happen. I don’t even know. I probably won’t even remember this tomorrow.”

Reid, if you’re reading this and need a refresher, you can watch the final out here, the full ninth inning here and all 27 outs here.

Detmers was perfect through five and issued his lone walk of the night to the first batter of the sixth.

The biggest threat to the no-hitter was a ground ball to first in the seventh inning. Angels first baseman Jared Walsh booted it, allowing Brett Phillips to reach base. But the official scorer ruled it an error, and the no-hitter remained intact.

“I thought that was pretty clearly an error,” Walsh told reporters. “I expect myself to make that play most of the time, so I would have definitely complained if they called that a hit.”

The box score is a weird one. Detmers struck out only two batters: Vidal Bruján in the third and Mike Zunino in the fifth. He’s the first pitcher since Francisco Liriano in 2011 to have two or fewer strikeouts in a no-hitter. In fact, of the 301 solo no-hitters in MLB history, only 28 have featured two or fewer strikeouts. (Ken Holtzman is the last pitcher to throw a no-hitter without a strikeout, in 1969 for the Cubs.)

But, hey, the whole game was weird. The Angels won in a laugher, 12–0. While Detmers was working on his no-hitter, the Rays brought in Phillips, an outfielder, to pitch. Anthony Rendon decided that was a good time for him to spin around and bat lefty for the first time in his career—and he hit a home run!

Anyway, back to Detmers. FanGraphs ranked him as the Angels’ No. 1 prospect before the season, and MLB.com had him as the No. 21 prospect in all of baseball. He was a first-round pick in 2020 out of Louisville and made his big league debut last August, at the end of his first professional season. He struggled in the five starts he made last year, though, recording a 7.40 ERA. He didn’t get off to a great start this year, either, carrying a 5.32 ERA into last night’s game, but maybe the no-hitter will be the start of a turnaround.

The best of Sports Illustrated 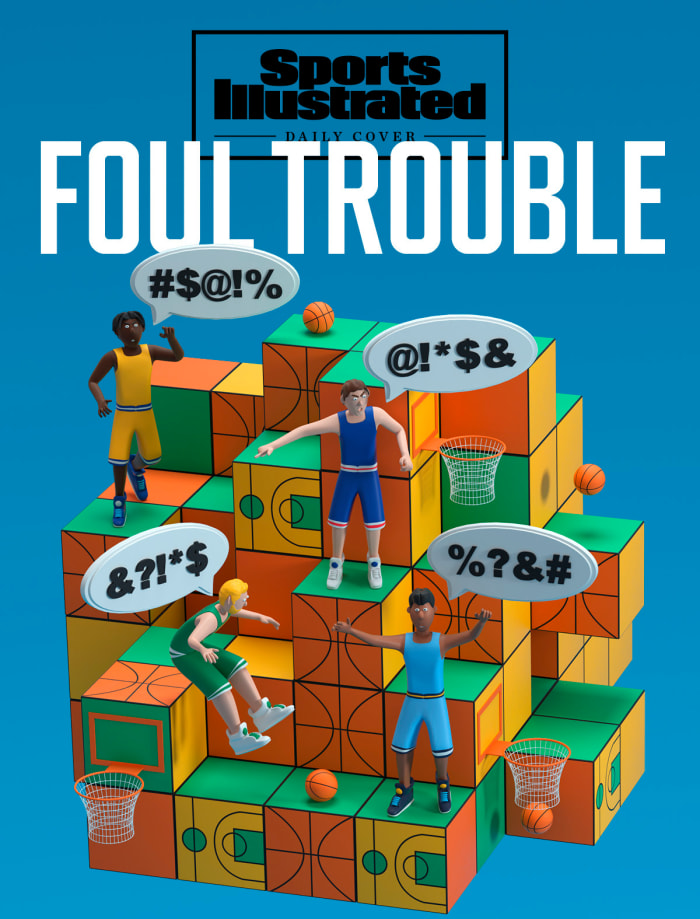 Howard Beck’s Daily Cover about profanity in the NBA and the league’s attempts to curtail it has only slightly fewer f-bombs than Casino.

Jimmy Traina breaks down Tom Brady’s decision to join Fox Sports after he retires. … Conor Orr writes that, in order for Brady to succeed as a broadcaster, he needs to be more honest with audiences than other former players have been in the booth. … With Urban Meyer reportedly set to return to Fox Sports, Conor is also on the latest episode of SI Weekly to discuss the coach’s disastrous tenure in Jacksonville. … The impending marriage of Erling Haaland and Manchester City is a frightening prospect for the rest of Europe’s top clubs, Jonathan Wilson writes.

Around the sports world

Joel Embiid spoke at length about not winning the MVP award. … Hall of Fame NBA center Bob Lanier has died. … Ja Morant is unlikely to return this postseason due to his knee injury. … Former Jaguars kicker Josh Lambo is reportedly suing the team over Urban Meyer’s alleged abuse. … Arch Manning has confirmed he’s narrowed his college choice to three schools. … EA Sports has ended its licensing agreement with FIFA, meaning that its soccer game will have a new name.

5. Vanderbilt’s Enrique Bradfield Jr. stealing home to tie the game with two outs in the bottom of the ninth (the Commodores went on to win in 11 innings)

4. Adrian Kempe’s overtime game-winner for the Kings in Edmonton

3. The Heat’s dominant win over the Sixers

1. Auston Matthews’s game-winning goal for the Maple Leafs and the reaction of the Toronto fans

On this day in 1919, Senators pitcher Walter Johnson threw 12 scoreless innings against the Yankees, at one point retiring 28 batters in a row. Why was the game halted and declared a tie?

Yesterday’s SIQ: What was the final play that Pat Summerall called alongside John Madden in the Fox booth?

Answer: Adam Vinatieri’s game-winning kick for the Patriots in Super Bowl XXXVI against the Rams.

Summerall announced during the 2001 playoffs that the Super Bowl broadcast would be his final game alongside Madden but said that he wasn’t retiring. According to the Los Angeles Times, Fox executives had begun concocting an exit plan for Summerall after a rocky 1999 season, but he went off script at a March 2000 press conference, refusing to announce his retirement (effective after the February ’02 Super Bowl).

Listening back to Summerall’s call of Vinatieri’s kick, you can see why Fox wanted him to step aside. He was far too subdued for the winning play of a Super Bowl.

Summerall would continue to call NFL games for a few more years, though not with Madden by his side. Madden had left to join ABC’s Monday Night Football booth. And Summerall was no longer Fox’s top guy, having been supplanted by Joe Buck, who began his partnership with Troy Aikman in 2002. 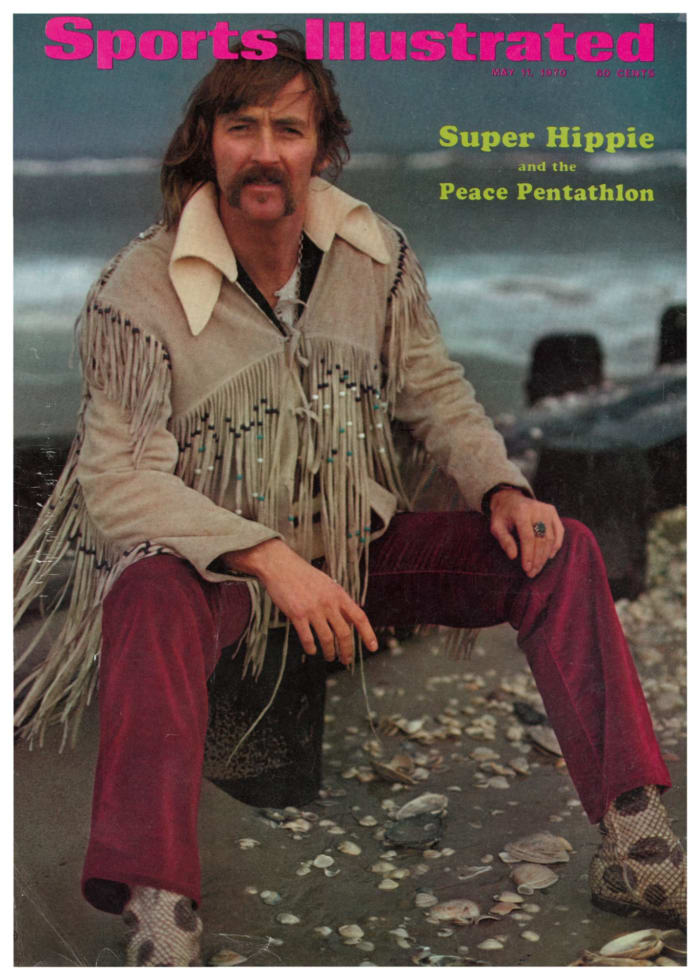 If I had been walking past a newsstand in May 1970 and spotted this magazine cover, I would have quickly fished 60 cents out of my pocket to buy it. What could be so interesting about the guy with the handlebar mustache that SI chose to feature him on the cover in the middle of the NBA and NHL’s championship series? A lot, actually.

The guy on the cover is David Miln Smith, whose “Peace Pentathlon” was the subject of a 5,800-word story inside the magazine by Robert F. Jones. The pentathlon itself (skydiving, swimming, scuba diving, running and motorcycling) is the hook for Jones’s story, but the article is really more about Smith’s laid-back approach to extreme athletic challenges. (I really enjoyed the piece and recommend reading it in full, but I must also note that it’s got some regrettably outdated language in a couple of spots.)

Smith had excelled at golf, swimming and skeet shooting as a kid but grew to loathe competition.

“To compete is to try to put someone else down,” he told Jones. “In a Christian sense, if we’re good enough to beat someone, we should also be good enough not to want to put him down. Even in pro games, where the execution is often so superb that it overrides the put-down aspect, you get a sense that it’s all programmed, all artificially narrow and not quite human. Whole cities get caught up in the put-down philosophy—the Jets have got to humiliate the Giants or else half the town will be unhappy. Or look at Baltimore—everywhere you look there’s a loser—Colts, Orioles, Bullets, Spiro T. Agnew.”

That doesn’t mean that Smith’s passion for athletics waned, though. After spending time at nine different colleges in his home state of California, Smith started traveling the world and undertaking grand athletic challenges just for the heck of it. He became the first person to swim across the Strait of Gibraltar from the African side to the European side (against the prevailing currents). He swam across the Hellespont (aka the Dardanelles) in Turkey, the Suez Canal and other enormous stretches of water. He walked 300 miles through Morocco’s Atlas Mountains and ran over a 9,000-foot mountain in Haiti.

His biggest undertaking to date was the Peace Pentathlon in the U.S. Virgin Islands. Here’s how he explained it to a group of curious locals:

“Peace, man. Five groovy events that people do for fun, not for war. Events that aren’t designed to beat other people, but to test what the athlete himself is capable of doing. If we can only get past the idea that we have to be better than the next cat, and concentrate on being better today than we were within ourselves yesterday, then the world will be a better place.”

Smith completed his self-designed one-man competition in six hours and 17 minutes. Is that an impressive time? Who knows? Who cares? That isn’t the point.

Check out more of SI’s archives and historic images at vault.si.com.

Sports Illustrated may receive compensation for some links to products and services on this website.