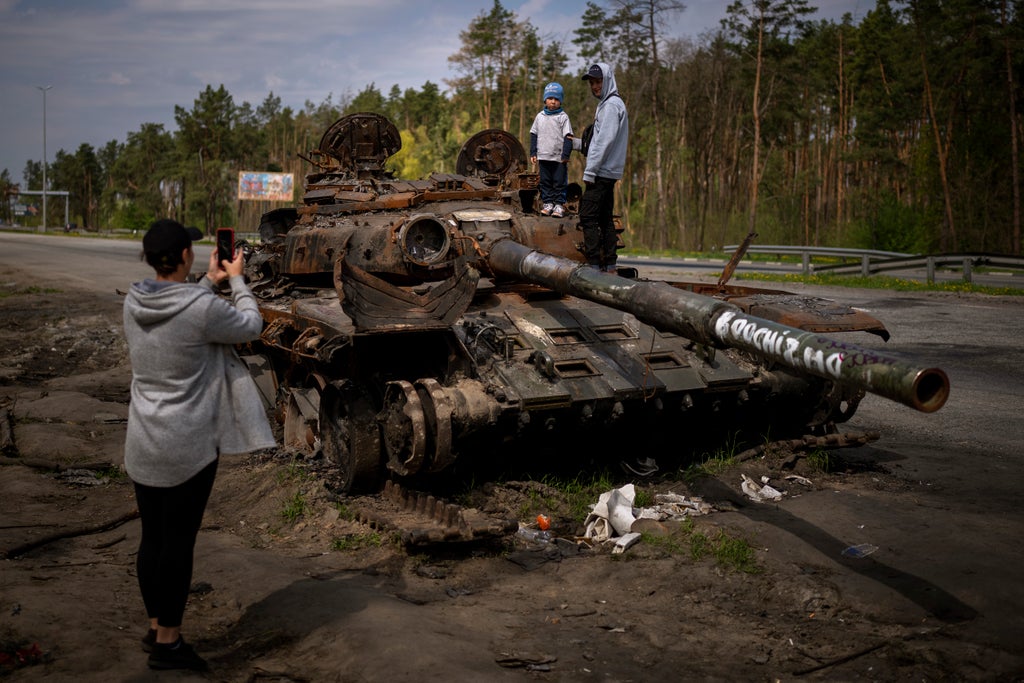 ome of Vladimir Putin’s top commanders have been “fired” after failures in his invasion of Ukraine, British defence chiefs said on Thursday.

They believe that a culture of “cover-ups and scape-goating” is now rife within Russia’s military and security services, hampering Mr Putin’s war.

In its latest intelligence update, the Ministry of Defence in London said: “In recent weeks, Russia has fired senior commanders who are considered to have performed poorly during the opening stages of its invasion of Ukraine.”

Lieutenant General Serhiy Kisel, who commanded the elite 1st Guards Tank Army, has been suspended for his failure to capture Kharkiv.Vice Admiral Igor Osipov, who commanded Russia’s Black Sea Fleet, has also likely been suspended following the sinking of the cruiser Moskva (the flagship of Russia’s navy) in April.General Valery Gerasimov, Russia’s most senior military chief, likely remains in post, but it is unclear whether he retains the confidence of President Putin.

General Gerasimov, Chief of the General Staff, was recently reported to have been injured after coming forward towards the war zone to try to inject fresh momentum in Russia’s military campaign in the Donbas region of eastern Ukraine, though this has not been confirmed.

After a string of setbacks for Mr Putin’s forces, the UK defence chiefs added in their intelligence update: “A culture of cover-ups and scape-goating is probably prevalent within the Russian military and security system.

“Many officials involved in the invasion of Ukraine will likely be increasingly distracted by efforts to avoid personal culpability for Russia’s operational set-backs.

“This will likely place further strain on Russia’s centralised model of command and control, as officers increasingly seek to defer key decisions to their superiors. It will be difficult for Russia to regain the initiative under these conditions.”

Britain and other nations in the West have led a highly effective campaign to win the crucial information war to highlight failures in Mr Putin’s invasion.

However, some of the failures of Mr Putin’s war have been clear for the world to see, with his troops having been forced to retreat from around Kyiv and swathes of northern Ukraine as his lightning invasion plan, which included seizing the capital within days, floundered.

Ukrainian soliders also recently reached the border with Russia, close to Kharkiv, Ukraine’s second largest city in the north east of the country, after pushing back Mr Putin’s forces.

His military campaign is believed to be making slow advances in the Donbas region, which includes the Donetsk and Luhansk areas controlled by Moscow-backed separatists, into where he has poured thousands more troops after the withdrawal from around Kyiv.

Battles are ebbing and flowing in the Donbas, with both sides gaining and losing ground, according to reports.

Ukraine’s general staff said in a statement on Thursday that Russia’s attacks were focused on the Donetsk region in the Donbas.

Around Slovyansk to the north of Donetsk, Russian forces “suffered significant losses” around the settlement of Velyka Komyshuvakha, it said.

“The partisans got it, although they did not blow up the armoured train itself,” he said in a video posted on social media, contradicting an earlier statement from Ukraine’s territorial defence force that the train had been blown up.

Shells have hit an alcohol factory in the village of Tyotkino and several other buildings, he wrote on messaging app Telegram.