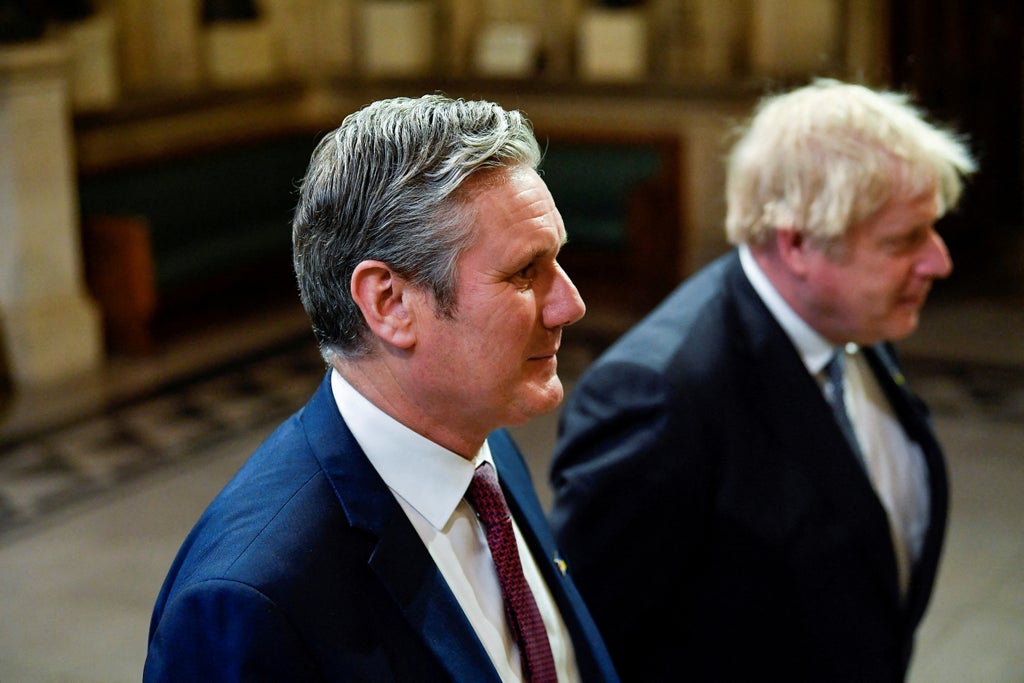 ir Keir Starmer has accused Boris Johnson of delivering a “pathetic” response to the cost-of-living crisis by presenting a “thin” Queen’s Speech to Parliament.

The Labour leader, who faced jibes in the Commons over the so-called Beergate affair, said the Government is “out of energy” and led by a Prime Minister who is “entirely out of touch”.

Mr Johnson hit back by attempting to mock Sir Keir by referring to him as the “Leader of the Opposition of the moment” and branding Labour MPs as “great quivering jellies of indecision” when it comes to nuclear energy.

Sir Keir earlier this week committed to stepping down as Labour leader if he is fined by police over an allegation he broke coronavirus laws.

A curry and beer gathering in Durham last year is at the centre of the probe although Sir Keir has repeatedly denied breaking the laws.

The Labour leader kept his distance from the allegations and focused his speech on the risk of a “stagflation crisis”.

He told the House of Commons: “The first great challenge our country faces is the cost-of-living crisis.

“Inflation stands at 7% and rising. Household bills have gone up by hundreds of pounds, the cost of the weekly shop has rocketed and people are seeing their wages run out much earlier in the month and the value of their savings fall.”

Sir Keir added: “This Government’s failure to grow the economy over a decade combined with its inertia in the face of spiralling bills means that we are staring down the barrel of something we haven’t seen in decades, a stagflation crisis.”

He accused the Government of “complacency”, saying it was “best summed up by a Prime Minister whose response to the crisis was to make fun of those that were worrying about inflation”.

Sir Keir called for an emergency budget, a windfall tax on oil and gas producers to help slash bills, and accused the Government of being “bereft of leadership”.

He said: “A government of the moment would take a step back from the crisis and ensure that Britain is never again so vulnerable to a surge in international prices, forced to go cap in hand from dictator to dictator looking for a quick fix of imported oil.”

Sir Keir added: “That means standing up to those vested interests who oppose onshore wind, the cheapest and most reliable source of electricity that we have. But this Prime Minister is too weak to stand up to his backbenchers.”

He stressed the need to invest in insulation projects, adding: “So we’re left with an Energy Bill not up to the moment, it’s the latest chapter in a pathetic response to the cost-of-living crisis.”

Mr Johnson later suggested that, after 2024, the Government will have “the fiscal firepower to help families up and down the country”.

He added: “My right honourable friend the Chancellor and I will be saying more about this in the days to come. But at the same time as we help people, we need the legislative firepower to fix the underlying problems in energy supply, in housing, in infrastructure and in skills which are driving up costs for families across the country.

“And this Queen’s Speech takes those issues head on. And above all, we are tackling the economic challenges with the best solution of all and that is an ever growing number of high wage, high skill jobs. Jobs, jobs, jobs.”

Cost of living will be the subject to be considered by MPs on day five of the Queen’s Speech debate on May 17.

Mr Johnson added: “However great our compassion and ingenuity, we cannot simply spend our way out of this problem, we need to grow out of this problem by creating hundreds of thousands of new high wage, high skill jobs across the country.”

He also claimed the legislative programme for the year ahead will allow the Government to “finish the job of unleashing the benefits of Brexit”.

Opening proceedings in the Commons on the first day of the new session, Conservative former minister Graham Stuart spoke about the history of his Beverley and Holderness constituency’s electoral controversies.

He said: “Free beer and cash were the electoral controversies then, as opposed to say, beer and curry today. Never, Mr Speaker, never in the history of human conflict has so much karma come from a korma.”