I called the telephone number from my hotel room in Los Angeles and could feel my body tremble slightly with anxiety. It was just two weeks ago, the morning of the All-Star Game at Dodger Stadium.

Every other phone conversation with Vin Scully was like opening a treasure chest. I delighted in each discovery. The stories would tumble out like a cascade of gold coins. The treasure was not because Vin was the greatest broadcaster of all time but because Vin restored your faith in humanity. He was an eloquent and humorous reminder that we are strongest with humility and empathy.

“Charmed” is the ultimate power of spoken words—the ability to delight and move people with only words. Scully charmed us better and longer than anyone.

In April, for instance, I called Vin on the 72nd anniversary of his first game as a Dodger broadcaster. He picked up the story.

“I remember I was so excited because it was Opening Day and Don Newcombe was pitching,” Scully said. “Don and I were good friends. It was at Shibe Park in Philadelphia. I would get the middle innings of the game to broadcast. I thought, This is great. I’m broadcasting the Dodgers, and my friend is pitching. Well, wouldn’t you know it. Don got knocked out of the game by the second inning. He was gone before I was on air.”

He laughed at the memory as if it happened yesterday.

This time, however, I was not sure if I would hear that most famous baseball voice. I heard from others that Vin was in seriously ill health. One of his daughters answered the phone.

For the next 15 minutes, Vin’s voice washed over me, the way the voices of Graham McNamee, Bill Stern and other great early sports broadcasters washed over him like rainwater when he was a child in upper Manhattan. Vin would crawl underneath a hulking wooden radio console and bathe in the shower of their words. He heard the roar of the crowd before he ever saw one. Hooked, he knew just what he wanted to do with his life: to be a sports announcer. He said just so when Sister Virginia Maria of the Sisters of Charity at the Incarnation School asked her grammar school students to write an essay on what they wanted to be when they grew up.

We laughed and joked. Having worked the national radio broadcast for the last All-Star Game at Dodger Stadium in 1980, one of 12 such Midsummer Classics he did, Vin kidded on the square about his goal working those games, when substitutes enter in waves: “Just don’t mess it up,” he said. “That’s all I wanted to do.”

He sounded well. He was sharp and cheery. As usual, he wished blessings upon me and my family. The benevolence of Vin was rooted in his faith. He spoke about “the most essential thing” he learned from his faith and the church was “the importance of continual communication with God.” I once asked him about how his wildest dreams had come true.

“Oh, for me, absolutely right on the money,” he said. “I’m not only getting this job to do a sport that I love, but then God’s charity allowing me to do it for 67 years. … It’s overwhelming. I mean, I have a big debt to pay in heaven—I hope when I get there—because the Lord has been so gracious to me all my life.”

When we hung up, I felt renewed again, like the first spring day when you feel the warmth of sunbeams on bare arms. Only later that night, at the ballpark, did I learn from one of Vin’s longtime friends that indeed he was not doing well physically. At 94, his body was failing. Two weeks later he took his last breath at home in Hidden Hills, Calif.

I cherish that last conversation because it says so much about Vin. The goodness, the kindness and the faith, none of which wavered even as the end of days drew near.

What made Vin Scully the greatest baseball broadcaster ever, one of the most trusted media personalities and one of America’s best 20th-century storytellers? Mastery of language? Timing? Technical brilliance? The intersection of car culture, the transistor radio and few televised Dodger games in the team’s first decade in Los Angeles? Sure, all of that.

But what made Vin the voice of summer, not just baseball, was the natural ease of his manner. His unselfishness in a business that wreaks of ego and privilege. Do yourself a favor and read the profile I wrote on Vin in his final season as Dodgers broadcaster, not because I wrote it, but because it captures Vin on Vin. Vin simultaneously was a giant and America’s best friend.

VERDUCCI: Get to Know Vin Scully, the Man Behind the Mic

“I like people to think of me as a friend,” he once said. “The nicest thing I’ve had people say to me is, ‘You know, when I hear your voice I think of some nights with my mom and dad barbecuing in the backyard,’ or ‘I remember a summer vacation.’” 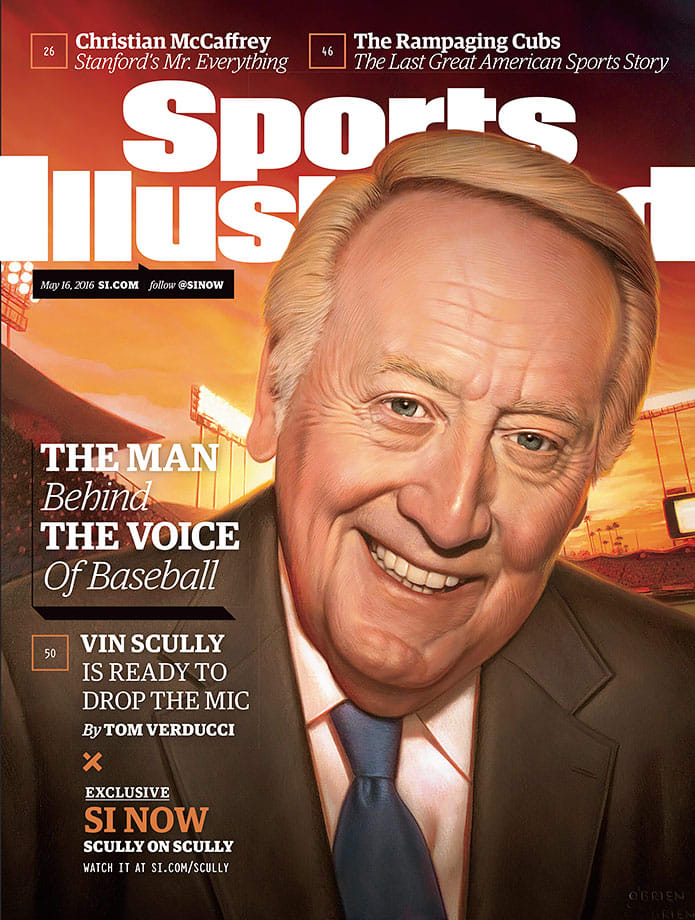 Freshmen at Fordham, including Vin Scully, class of 1949, take a seminar class taught by the most accomplished faculty called eloquentia perfecta. It emerged from the rhetorical studies of the ancient Greeks, codified in Jesuit tradition in 1599. It refers to the ideal orator: a good person speaking well for the common good. It is based on humility: The speaker begins with the needs of the audience, not a personal agenda. Vin Scully was that ideal orator. A modern Socrates, only more revered.

He was an amazing firsthand witness and chronicler of history. He covered Fordham football when Vince Lombardi was an assistant coach; played college baseball against George H.W. Bush of Yale; started out with Red Barber (“Don’t copy,” Barber advised him. “You will water your own wine.”); befriended Jackie and Rachel Robinson; was in the dreary Dodgers clubhouse after the home run by Bobby Thomson off Ralph Branca (“You know what I don’t understand?” he heard Pee Wee Reese ask Jackie. “What?” Jackie said. “How come all these years playing baseball I haven’t gone insane,” Pee Wee told him); called the last out of the Brooklyn Dodgers’ only World Series championship (“Ladies and gentlemen, the Brooklyn Dodgers are champions of the world.” He said later, “If I said another word I would have broken down and cried”); met popes and presidents; was neighbors and friends with John Wooden; called Koufax no-hitters with poetic perfection; called The Catch, from Montana to Clark, Gibson’s home run and Bonds’s 71st homer; and quoted opera and Shakespeare as easily as he did Yogi. And yet never did Vin place himself above the people and events he was there to chronicle.

My favorite line from Vin is one he borrowed from Sir Lawrence Olivier, which is fitting, seeing that Vin brought Olivier’s timing and eloquence into a broadcast booth like none other before, since or ever again. How, I wondered, could you be so good for so long?

“The humility to prepare,” Vin said, “and the confidence to pull it off.”

He prepared as thoroughly in his 67th year as he did in his first.

One of Vin’s classmates at Fordham Prep was a baseball teammate named Larry Miggins. One day the two of them were talking in the school auditorium when they asked each other what they dreamed they would become one day. Miggins told Vin he wanted to be a major league ballplayer. Vin told Larry he wanted to be a sports announcer.

Eight years later, on May 13, 1952, Larry Miggins of Fordham Prep, then of the  Cardinals, and playing against the Dodgers at Ebbets Field in Brooklyn, hit the first of his two career home runs in the major leagues. On the call was Vin Scully.

It was, Scully later said, “as close to breaking down doing a baseball game or any other sporting event I have ever experienced.”

It seemed a charmed life, though his father, Vincent Aloysius, a traveling silk salesman, died when he was five, and his first wife and a son preceded him long ago with untimely deaths. Charmed is what Vin did. The root of the word comes from Latin and Old French for songs, incantations and magic spells. Charmed is the ultimate power of spoken words—the ability to delight and move people with only words. Vin charmed us better and longer than anyone.

In 2000, Scully returned to Fordham University to give the commencement address. It was his first time back on campus since the Dodgers left for Los Angeles in 1958. Vin charmed. For 19 minutes he revealed as much of his personal philosophy as he ever did. It was 19 minutes of eloquentia perfecta.

He asked the graduates to follow the Ten Commandments, to “build a better moral climate,” to “be a bobbed cork: when pushed down, bob up,” and to “leave some pauses and gaps so that you can do something spontaneously rather than just being led by the arm.”

And then that boy from underneath the wooden console radio who became one of America’s most beloved voices took note of how this path of his dreams became possible.

“Don’t let the winds blow your dreams away,” he said, “or steal you of your faith in God.”

I think about that life lesson as I stare at the contacts in my phone, and that awkwardness of seeing a name of the deceased. Vin Scully is gone now, making good, as he would say, on repaying God’s great charity. But the voice is not stilled. It is eternal, not because of the preservation of his famous calls, but because of how he lived a beautiful life.