Last night’s Game 3 was the most entertaining 7–0 result I’ve ever seen. Despite the lopsided outcome, it was impossible for even the most nonpartisan people watching at home to feel anything but feral joy.

That’s the effect these Phillies have on us. They are the most relatable band of ballplayers I can remember. They are having the time of their lives, and they are not afraid to show it—a refreshing deviation from the buttoned-up humdrum we get from most teams. They are large, lovable lads who crush dingers and celebrate every single one of them as if they had just hit the final beer-pong shot after pounding Yuenglings all day long.

The story of these Phillies is remarkable. I won’t dive into their improbable journey from the beginning of the season to where they are now, just two wins away from capturing the World Series, because you probably know most of the points on the timeline. And besides, their accomplishments are much better understood through raw, visceral emotion.

Perhaps the best encapsulation of their season happened in the second inning of last night’s game. One of my roommates was watching the game with me, and when Wet Guy Brandon Marsh stepped to the plate, I told him about a revelatory detail from this extraordinary work of journalism by Jake Mintz, of Céspedes Family BBQ fame and Fox Sports: The Phillies center fielder dumps water on his head between every inning.

Moments later, Marsh launched a solo home run, which at first, he said after the game, he didn’t think was gone. Following that brief confusion, he proceeded with his trip around the bases, his moist mane flapping as he galloped toward the plate. As he neared the dugout, he left out a loud, guttural, inarticulate shout. My roommate’s reaction: “He’s a kinda crazy man.” Yes, yes he is. They all are. Heck, we all are, too. That’s why we love them.

Before we continue, I need to correct an error in yesterday’s newsletter. I mixed up my days of the week when writing about the schedule following the rainout. Game 5 will be played tomorrow night, Thursday, not Friday, which is the travel day. Thanks to those of you who emailed and let me know so I could correct it in the web version before too long.

“We love conspiracy theories. They are to cognition what paint-by-numbers are to art. Quick, easy fun. World Series Game 3 was one of those made-for-crayon opportunities.”

That’s how Tom Verducci begins his excellent column from last night about how the Phillies shellacked Astros righthander Lance McCullers Jr. It was such a battering that right away people began to assume the Houston starter was tipping his pitches. However, as Tom explains, McCullers wasn’t tipping his pitches, even if the Philadelphia hitters knew what was coming.

How the Phillies Figured Out Lance McCullers Jr. by Tom Verducci
He wasn’t tipping pitches in his disastrous outing against the Phillies. They’d just realized how he wanted to pitch them. 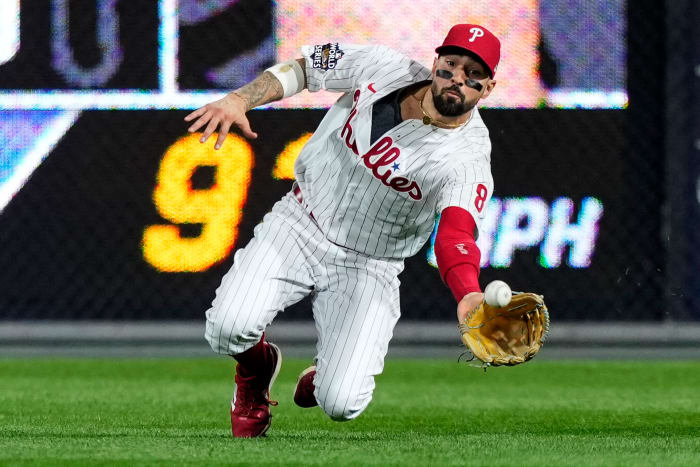 I love this story from Stephanie Apstein, about Nick Castellanos and his surprisingly great defense this postseason, despite being a dreadful right fielder throughout his career. Castellanos admitted his mind wanders out there during the regular season.

The playoffs are different, though. He said they were “very similar” to Adderall and Vyvanse in that he focuses so much better in the postseason. It’s a really interesting story about a most interesting player.

And you should also check out Emma Baccellieri’s column from last night. Here, she explains how the Philadelphia Big Bois and Dusty Baker’s confounding inaction, along with what Sports Illustrated copy chief Julie Kliegman and I are calling “Himbo Destiny,” have completely flipped this series. Once, it seemed like the Phillies had no chance to win; now, they’re set up so well that it’s hard to imagine a world in which they lose.

The Phillies Erase the Astros’ Most Obvious World Series Advantage by Emma Baccellieri
Philadelphia is fully in control of the Fall Classic after its least-heralded pitchers shut out Houston in Game 3.

Yes, that’s what I’m going to call this Worth Noting section whenever it includes a trivia question. J.T. Realmuto is about as close to a five-tool player as you’ll find at his position. This year he became just the second catcher in MLB history with 20 home runs and 20 stolen bases in the same season. Can you name the other one? (Bonus points if you can name the year of his 20/20 campaign.)

The Phillies will look to take a commanding 3–1 series lead with another home win at 8:03 p.m. ET tonight. Astros manager Dusty Baker made the decision to start Cristian Javier in Game 4 before the Game 3 rainout that pushed every remaining game of the Series back by a day, technically allowing for Justin Verlander to start Wednesday on “normal” four days rest if Baker wanted him to. But there are plenty of reasons for Baker to stick with Javier, especially after Verlander coughed up a 5–0 lead in Game 1 and could benefit from an extra day of rest, which he and most Astros starters usually received during the regular season in Houston’s six-man rotation.

Javier’s 33.2% strikeout rate is the highest among Astros starters, and his hit rate of 5.4 H/9 IP is also the lowest on their staff—starters or relievers. In his last outing, he held the Yankees to just one hit in 5⅓ innings in Houston’s ALCS Game 3 win in Yankee Stadium, though he did walk three New York batters. That’s reflective of his sometimes spotty command, as his 8.9% walk rate is quite high for a starter and often limited how deep he could work into games during the regular season. He’ll have to work carefully around the top of Philadelphia’s lineup, which features several patient hitters—especially if Aaron Nola, Javier’s Game 4 counterpart, pitches to his potential. 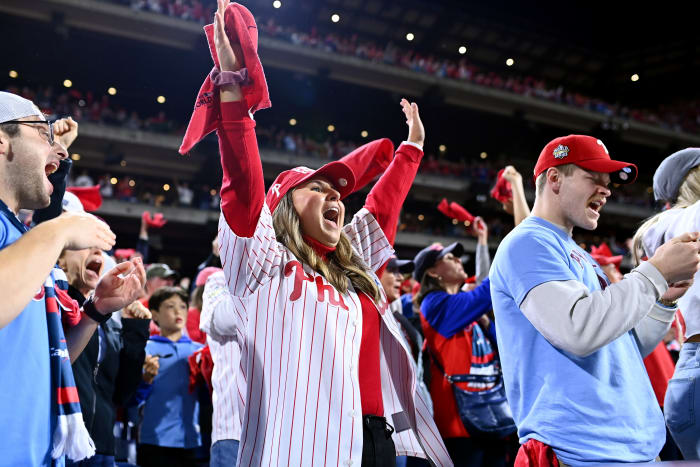 Phillies fans are having a whole lot of fun at Citizens Bank Park this postseason.

Much has been said about how loud it gets in Citizens Bank Park in the postseason, and all of it is true. But even after being in attendance for the first five playoff games here, I was still a bit surprised Tuesday—not at the crowd noise for any of the home runs, no, but at the Castellanos catch in the first inning! It was almost as loud as it was for Harper’s home run in Game 5 of the NLCS or for the one Hoskins hit in Game 3 of the NLDS. Now that’s impressive.

That’s all from us today. We’ll be back in your inbox tomorrow. In the meantime, share this newsletter with your friends and family, and tell them to sign up at SI.com/newsletters. If you have any questions or comments, shoot us an email at mlb@si.com.