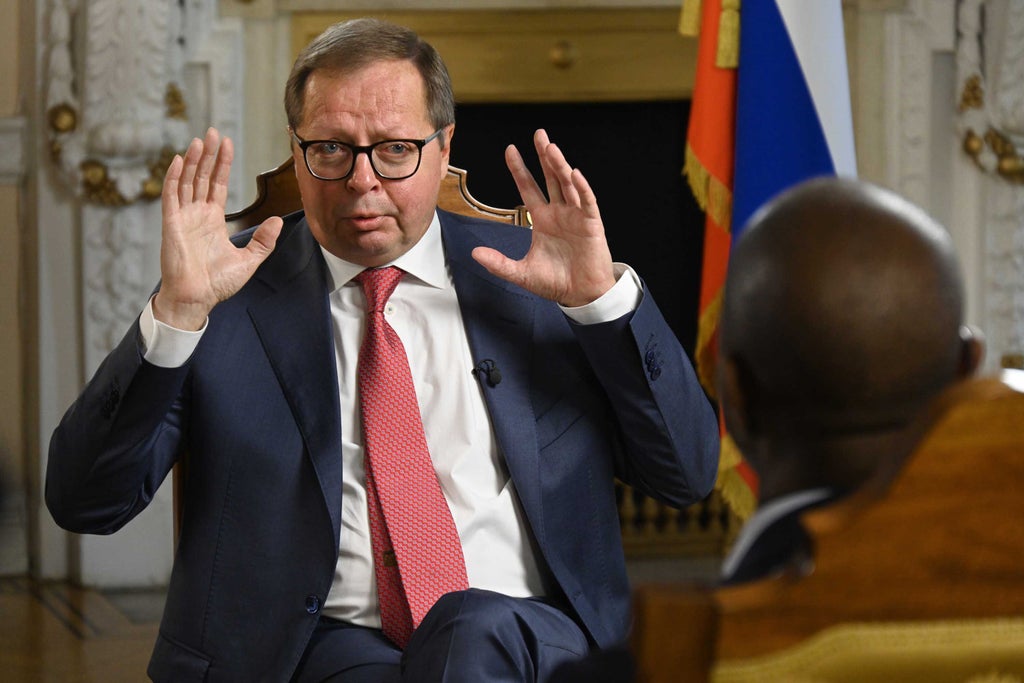 iz Truss has been accused by Russia’s ambassador to the UK of being “very belligerent” and wanting to “prolong” the conflict in Ukraine.

Andrei Kelin said the Foreign Secretary wanted to “instigate the conflict” by pushing for the West to continue supplying Kyiv in a position he argued would be “no good for Ukraine”.

Ms Truss, during a visit to the Czech Republic on Friday, told western allies they needed to be “ready for the long haul” when it came to supporting Ukraine’s resistance, with “no talk of ceasefires or appeasing Putin”.

She said: “We need to make sure that Ukraine wins and that Russia withdraws and that we never see this type of Russian aggression again.”

Mr Kelin said Ms Truss’s stance showed that London was not interested in bringing about an end to the conflict, which Moscow started in February when it ordered an invasion of its neighbour.

Attempts to take the entire country were shelved due to a fierce Ukrainian defence, particularly around the capital.

The Kremlin’s forces regrouped and since last month have instead focused their firepower on taking the Donbas region in the east where Russian-backed separatists have held ground for eight years.

“She’s neither a professional military man or she’s not (been) for a long time at this position.

“But she’s very belligerent. If she would like to continue the war she will prolongate the conflict.

It is not the first time Kremlin figures have looked to discredit Ms Truss.

Following talks in Moscow between the Cabinet minister and her Russian counterpart Sergei Lavrov in February before the invasion started, the foreign minister characterised the meeting as a “conversation between deaf and dumb”, claiming Ms Truss did not listen to Russia’s position.

In a lengthy interview, Mr Kelin said Britain’s encouragement of Ukrainian President Volodymyr Zelensky and his troops would only delay a peace deal.

Prime Minister Boris Johnson told Mr Zelensky during a phone call on Saturday that the UK would “continue to support the heroic Ukrainian armed forces”, including by providing the “equipment they need”.

On the “stalemate” between Kyiv and Moscow over a ceasefire, Mr Kelin added: “And what we have from London, it is not the desire to finalise it or to negotiate it.

“We hear every day new appeals to send more weapons to Ukraine, to fight until the last Ukrainian soldier, to continue the conflict.  And no negotiation until Russia will be beaten.”

The diplomat said Russian troops were involved in a “limited operation” and not a war in eastern Ukraine.

He argued Moscow had come to the aid of “two independent republics”, a reference to the Kremlin-backed breakaways in Donetsk and Luhansk, major areas in the industrialised Donbas region, and that the advance was about protecting Russian people.

The official said Russian President Vladimir Putin would not use nuclear weapons in the conflict, stating how there were “very strict” rules on their use, with nuclear missiles only allowed to be deployed “when the existence of the state is endangered”.

“It has nothing to do with the current operation,” he added.

The battle for Donbas has centred on Sievierodonetsk and Lysychansk in recent weeks, with constant shelling being focused on the last major areas under Ukrainian control in the Luhansk province.

Ukrainian officials reported that Russian forces were “storming” the eastern city of Sievierodonetsk, where the fighting has knocked out power and mobile phone services and terrorised civilians who have not fled.

Mr Zelensky, following a trip to Ukraine’s second-largest city Kharkiv on Sunday in a rare visit to the eastern front line, described the situation in Donbas as “indescribably difficult”.

Ukrainian fighters pushed Russian forces back from positions near the city several weeks ago but it remains under fire.

Kyiv has warned the West that unless its troops are supplied with more advanced weapons, it will not be able to halt the Russian advance.