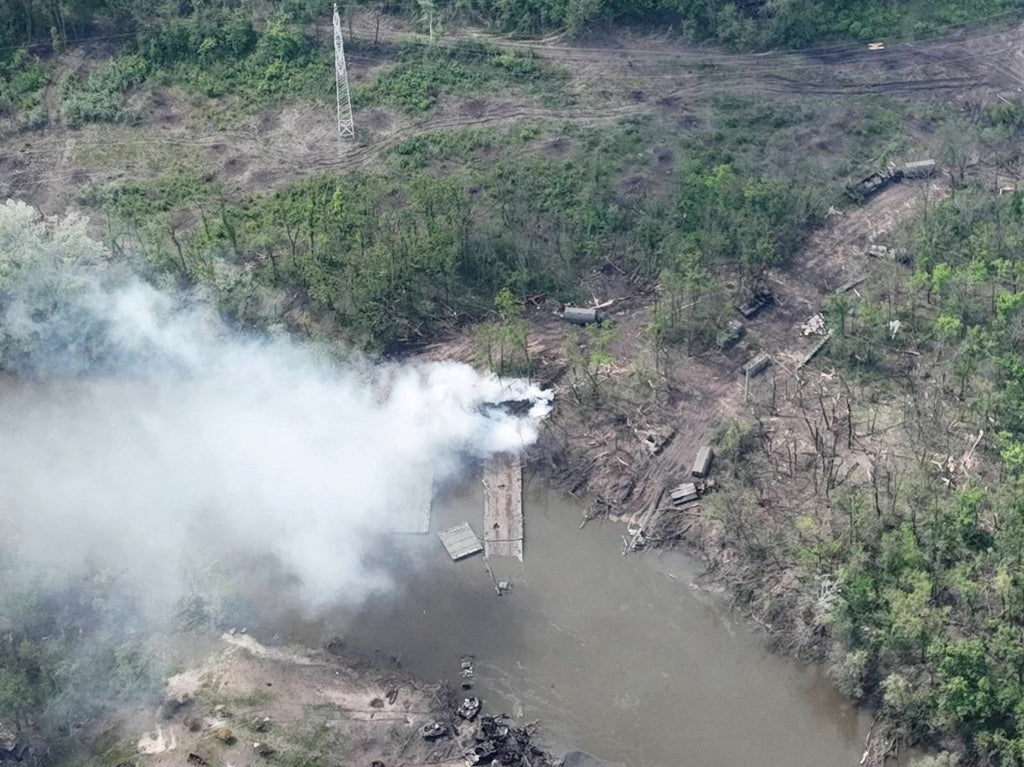 They highlighted how a number of Russian armoured vehicles were destroyed by Ukrainian forces as they attempted a river crossing.

The Russian president is still sticking to his largely unsuccessful strategy of trying to surround some of Ukraine’s best-trained and best-equipped forces in the east of the country.

He is pursuing this plan after the failure of his initial invasion, which included seeking to seize Kyiv within days, and his troops were forced to retreat from swathes of northern Ukraine.

In its latest intelligence update, the Ministry of Defence in London said on Mr Putin refocusing his military campaign on the Donbas: “Russian forces have failed to make any significant advances despite concentrating forces in this area after withdrawing and redeploying units from the Kyiv and Chernihiv Oblasts.”

“Images indicate that during the crossing of the Siverskyi Donets river west of Severodonetsk, Russia lost significant armoured manoeuvre elements of at least one Battalion Tactical Group as well as the deployed pontoon bridging equipment.”

The UK military chiefs added: “Conducting river crossings in a contested environment is a highly risky manoeuvre and speaks to the pressure the Russian commanders are under to make progress in their operations in eastern Ukraine.”

Mr Putin’s troops have been forced to withdraw from near Kharkiv, Ukraine’s second largest city which is close to the border with Russia, after Ukrainian counter-attacks.Seizing this territory could hamper Russian re-supply lines as Mr Putin continues to throw troops at trying to grab some success in the Donbas.

The MoD added: “Russia is investing significant effort in the vicinity of Izium and Severodonetsk in an attempt to achieve a breakthrough towards Sloviansk and Kramatorsk.

“The primary objective on this axis is to envelop Ukrainian forces in the Joint Forces Operation area, isolating them from support or reinforcement by units in the west of the country.”