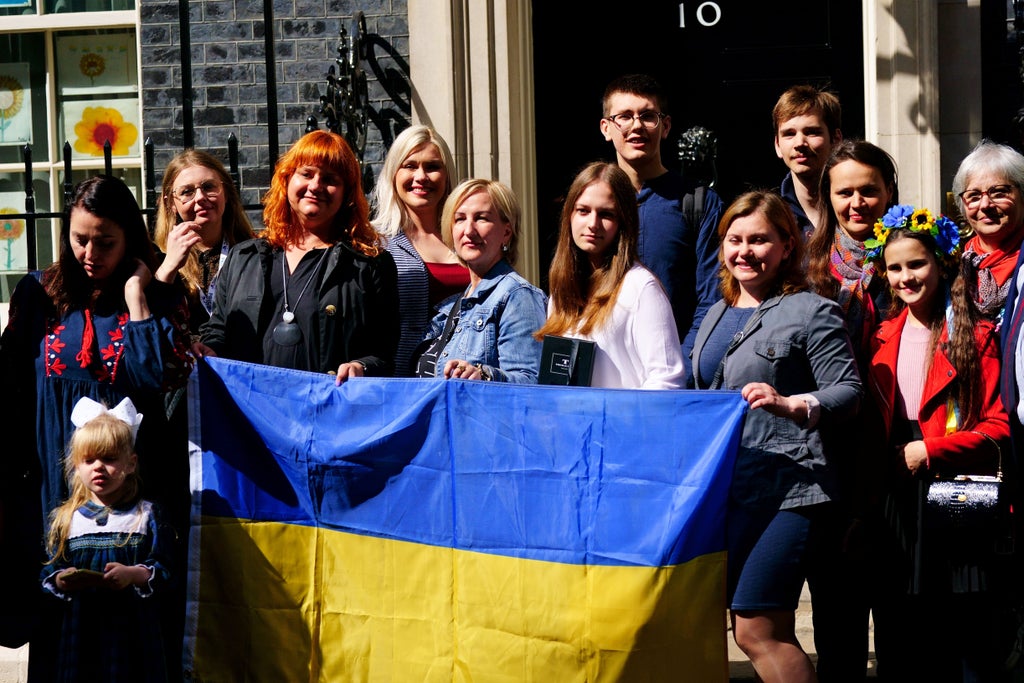 krainian families who have been housed in the UK through refugee schemes have said they “feel safe here” after meeting Boris Johnson at Downing Street.

The Prime Minister greeted a group of around 10 refugees at the official residence in central London.

Some of the group had been housed through the Homes for Ukraine Scheme and others had arrived through the Ukraine Family Scheme – both of which were set up by the UK Government in the wake of the Russian invasion.

Speaking to the PA news agency, Natalia Kogut, 40, said her family feel “safe” and they are “thankful” to Mr Johnson for the support Ukraine has received.

The family have since been taken in by an elderly woman who lives in a “big house” in Birmingham, she explained.

The 41-year-old said “we feel safe here” but added that they are worried for her husband, who is still in Ukraine, delivering supplies and food.

Asked about meeting Mr Johnson, she said: “It was amazing – even British nationals not always can say they have met the Prime Minister and been to the residence and for us it’s amazing.”

“The children are so happy,” she said, adding that her daughter Melisa sang the Ukrainian national anthem to the Prime Minister.

“I was so proud – people were crying hearing it,” Ms Kogut said.

On her family finding a sponsor, she said: “We are very happy and I don’t know what to say and we are very thankful and people are very kind really.

Kira Ryndova, three, holds a Larry the cat soft toy as she sits on the steps of 10 Downing Street (Victoria Jones/PA) / PA Wire

“Just we can think about how it was difficult crossing the border with this road and this bombing and what we remember, and here we’re happy but there are people left there who don’t have such possibility, and some people we knew – they perished in Bucha.

“So it’s mixed feelings because sometimes I even feel some kind of guilt because I’m here safe.”

Nina Herasymenko, 41, and her son Bohdon, 16, arrived in the UK on April 10 after fleeing the Russian-occupied region of Kherson, near Crimea, three days earlier.

The pair arrived through the Ukraine Family Scheme and are staying with Ms Herasymenko’s sister Tatiana Krupenko, 35, who lives in Birmingham.

Ms Krupenko said: “It was a bit touch and go whether they would get there.”

She translated for her sister, who said they had to get in the car with no possessions or clothes and drive through a minefield to escape the region.

Ms Krupenko said: “They went in hope that they would actually make it somewhere because they were running low on food supplies, there was nothing in the supermarket at that point, no supplies, no nothing.”

She said her sister had described what it was like living in Kherson, saying: “You don’t know who’s going to be next, you can’t sleep because constant missiles, constant shooting, you don’t know whether it’s going to hit you or someone else, the places that you loved have gone, the hopes and dreams of 16-year-olds have vanished.”

Ms Herasymenko then explained how they were forced to drive through a minefield and over a railway bridge as the Russians bombed the roads.

“She said: ‘I genuinely didn’t believe we’re going to make it through’,” Ms Krupenko translated.

Asked how she felt that her sister and nephew were in the UK, the 35-year-old said: “Amazing, just so grateful that they’re safe.”

She added that her family are “very grateful for the opportunity but also for all of Boris’s help”.

“He was really down to earth, chatting to everyone, making jokes, we taught him a few Ukrainian words,” Ms Krupenko said.

“It’s just been really lovely and an amazing experience, he’s just like a normal human being.”

Alicja Kaczmarek, who works for the Polish Expat Association, which supports central and eastern European migrants and helped organise the meeting, said Ukrainians have had “mixed experiences” getting to the UK.

She said: “We have a long list of families waiting to come to homes from Ukraine but the process is very slow.

“The people we supported have had mixed experiences,” Ms Kaczmarek added.

“But to be honest, things are changing every single week and it’s really speeding up now.”

On the future of the schemes, she said: “We don’t know what is going to happen after the six months.

“We worry that there might not be a continuation – there’s no reassurances at the moment so everything is very short term.

“But it’s working, more and more people are coming.”